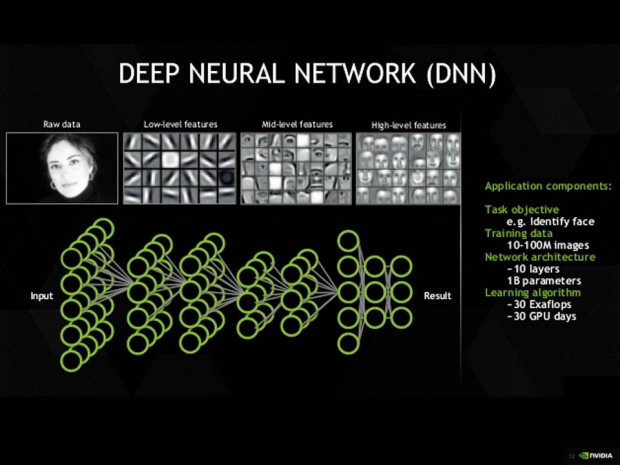 During Nvidia’s annual GPU Technology Conference this week in San Jose, California, company officials mentioned that efforts are currently underway to train over 100,000 developers in machine learning and artificial intelligence through its Deep Learning Institute.

In 2015, Nvidia’s launched a program called the Deep Learning Institute that features a mix of hands-on training sessions and online courses for developers interested in solving some of the world’s more challenging AI problems. Initial sessions were offered at various GTC conferences taking place in eight cities, including India and China. The institute then expanded dramatically in late 2016, opening up online courses worldwide in collaboration with Coursera, Udacity, and Microsoft. Topics now include how to become a self-driving car engineer, using deep learning to create smarter robots with Microsoft Azure, and predicting the risk of a disease in time to prevent it.

In its first two years, the Deep Learning Institute delivered more than 18,000 hours of hands-on instruction during a global series of GTC conferences in seven cities stretching from Amsterdam to Beijing. In the US, the institute has trained developers at companies including Adobe, Alibaba, and SAP, and at government institutions including the National Institutes of Health (NIH), National Institute of Science and Technology (NIST). In Europe and Asia, it has reached the Barcelona Supercomputing Center in Spain, and higher learning institutes including Temasek Polytechnic in Singapore and the India Institute of Technology in Bombay. 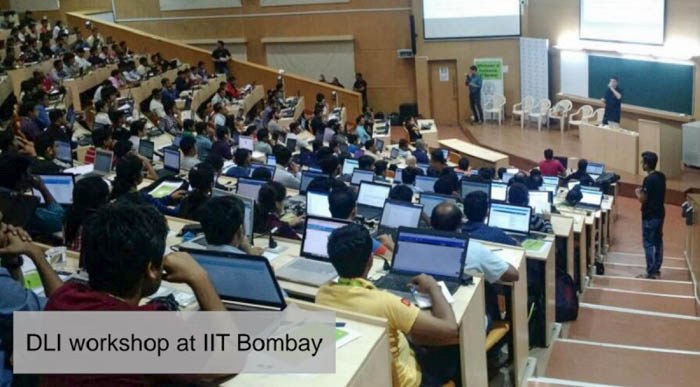 Now that the courses are offered online, Nvidia wants to train up to 100,000 data scientists and developers in mastering their skills not only in machine learning workflows, but in using deep neural networks to solve complex real-world modeling problems.

“AI is the defining technology of our generation,” says Greg Estes, vice president of Nvidia’s developer programs. “To meet overwhelming demand from enterprises, government agencies, and universities, we are dramatically expanding the breadth and depth of our offerings, so developers worldwide can learn how to leverage this transformative technology.” 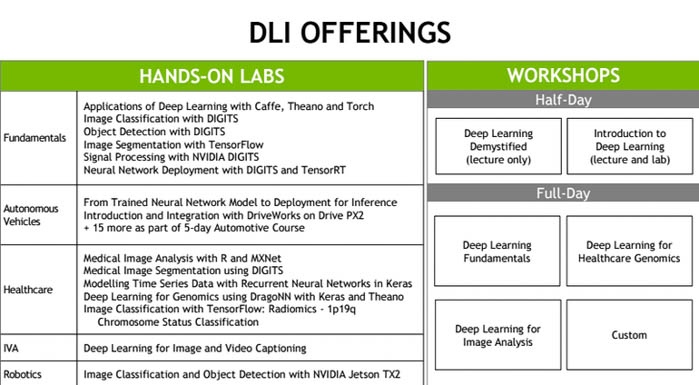 The company is now offering instructor-led seminars, workshops, and classes to reach developers across Asia, Europe and the Americas. Hands-on labs are taught by certified experts from Nvidia partnering companies and universities. Each lab covers a fundamental tenet of deep learning, with topics including AI for object detection and image classification with TensorFlow, neural network deployment with DIGITS, and inference optimization for autonomous vehicles with TensorRT. Coursework is delivered online using high-performance Amazon Web Services (AWS) EC2 P2 GPU instances and through Google’s Qwiklabs.

Estes told GTC 2017 attendees that it made sense for the company to partner with larger companies. “They are going to help us expand our reach, because these companies are much bigger than we are.” The additional benefit for developers, however, is that content will be able to port directly to other cloud platforms including Microsoft Azure, IBM Power and the IBM Cloud.

Nvidia plans to certify engineer competence within the next year

Within the next year, Nvidia plans to be able to certify engineering competence in the labs it now offers. Areas of instruction include health care, self-driving cars, web services, robotics, video analytics, and financial services.

“Today when you go through and you take these learning courses, we give you a certificate that you have attended the course, but we don't have the testing at the end," Estes says. “That is on our roadmap, and we plan to do that this year.”

Last modified on 10 May 2017
Rate this item
(0 votes)
Tagged under
More in this category: « Apple first US company to reach $800 billion market cap Nvidia draws cancer researchers with donation »
back to top