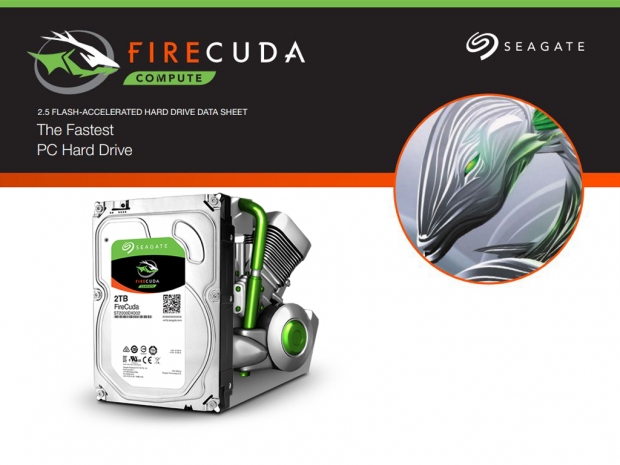 Seagate has unveiled an addition to its FireCuda hybrid HDD lineup, the 2.5-inch 2TB FireCuda, as well as a  5TB 2.5-inch mobile HDD which will be a part of its BarraCuda lineup.

Meant for gaming and professional creative applications, the Seagate FireCuda SSHD lineup was previously available in 3.5-inch 1TB and 2TB capacities as well as 2.5-inch 500GB and 1TB capacities, offering impressive performance which should be up to five times faster than typical hard drives, all thanks to some help from additional on-board NAND flash.

While only packing 8GB of NAND flash, Seagate's Multi-Tier Caching algorithms analyse how the system is being used and place commonly used files on the Flash part of the FireCuda SSHD thus providing higher performance and even lower power consumption. According to Seagate, the 2.5-inch FireCuda SSHD should offer 140MB/s of data transfer rate and be around 50 percent faster in games, load applications around 300 percent faster and boot up around 25 percent faster, at least when compared to a standard 7,200 RPM HDD.

Based on the standard 2.5-inch 7mm thick form-factor, the 2.5-inch FireCuda lineup should start appearing in notebooks and Ultrabooks meant for serious gaming, workstations and/or professional application systems.

In addition to the 2TB 2.5-inch FireCuda SSHD, Seagate has also announced a 2.5-inch 5TB BarraCuda mobile SATA 6Gbps HDD. This one is also coming in a standard 2.5-inch 7mm thick form-factor and packs 128MB of on-board DRAM cache. The new 5TB 2.5-inch BarraCuda will be joining 500GB, 1TB, 2TB, 3TB and 4TB HDDs from the same lineup.

The Seagate 2TB 2.5-inch FireCuda SSHD and 5TB 2.5-inch BarraCuda HDD are the latest addition to Seagate's redesigned lineup. Unfortunately, Seagate did not reveal any information regarding the price but these should appear in retail/e-tail soon.