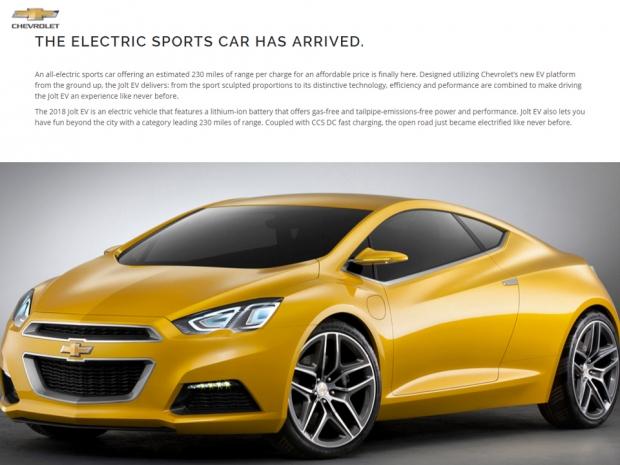 Recently, a website for an unreleased Chevrolet vehicle has been listed alleging to portray an upcoming all-electric vehicle with a 230-mile range and a price as low as $30,000. While the new Chevrolet vehicle is schedule to launch sometime in 2018, there is only one problem – it isn’t an official vehicle authorized by Chevrolet or any of its partners.

General Motors has not confirmed this vehicle or any specifications

The vehicle even has all standard safety features one could ask for – side blind-zone alerts, rear cross-traffic alerts, forward safety awareness, 10 air bags, a high-strength steel frame and even automatic crash response.

Meanwhile, Chevrolet is officially preparing to launch the 2017 Chevy Bolt later this year – an all-electric, 4-seat vehicle with a 200-mile range, expected to be released sometime in Q4. As Chris Ziegler from The Verge points out, there are a few notable 2018 Chevy Jolt website and product details that don’t quite match up. For instance, the first notable difference is that font type is different. Second, and importantly, is that there is no vehicle performance comparison chart at the bottom. Chevrolet and other manufacturers usually include these to draw convenient performance indicators between their own vehicle and those of competitors. Finally, there are a few mismatches on the Chevy Jolt vehicle renderings. A quick visit to the aforementioned page or the 2017 Chevy Volt page will reveal some very similar design attributes. 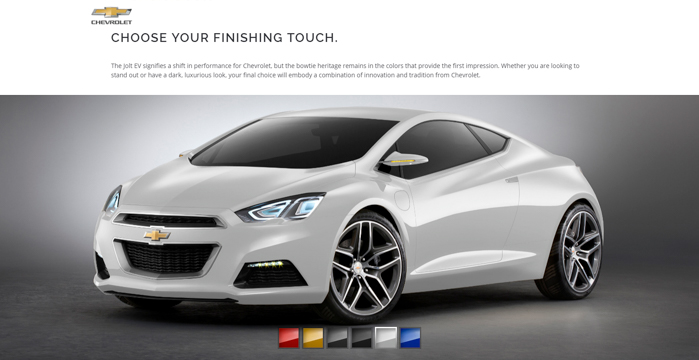 Of course, whoever was responsible for page creation gave the vehicle a 10.2-inch display featuring Android Auto, just like the upcoming all-electric Bolt – an upgrade from the 8-inch found on the Chevy Volt. Like the upcoming 2017 Bolt and current Volt models, it was also given an integrated OnStar 4G LTE Wi-Fi hotspot.

After Ziegler spoke with a General Motors spokesperson, he was able to confirm that GM is not involved with this website and suggested that it is using some of their copyrighted materials. The site was registered in March and is currently registration-protected. Electrek.co has also confirmed with GM that the site is not authentic.

Although the site technically looks legitimate from a marketing standpoint and has been confirmed otherwise, many are still hopeful that General Motors, Tesla and other EV vehicle builders take some of its more attractive design characteristics into consideration for future EV projects. The 0.24 Cd drag coefficient, for instance, is still definitely a plus and has only been succeeded by the 1935 Tatra T77A, upcoming Tesla Model 3, 1996 General Motors EV1 and 2013 Volkswagen XL1.

Last modified on 04 May 2016
Rate this item
(1 Vote)
Tagged under
More in this category: « 10-year old for finds Instagram flaw, Facebook pays him $10,000 Russian hacker hands over 272 million unique email accounts »
back to top