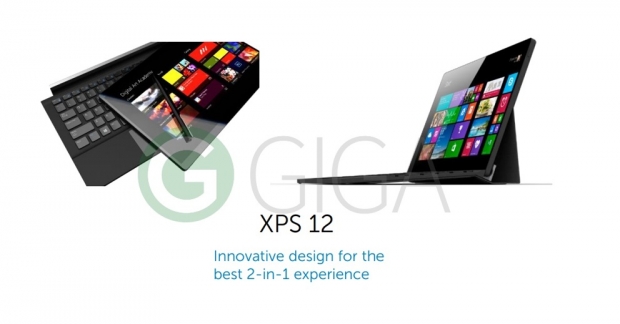 XPS 12 is now a two-piece shapeshifter.

The XPS line is Dell's higher end laptop line. The XPS 13 2015 edition is one of our favourite laptops for the year with its great spec packed into a tiny chasis, thanks to the "infinity" Sharp IGZO display.

XPS 12 in its last iteration is nowhere near as interesting, although it definitely has its qualities. It's small and well built, the keyboard is a joy to type on and it transforms into a tablet using Dell's good old swiwel design. It's not officially launched yet, but the good people at giga.de bring us the leaked info.

The version for 2015 carries its predecessor's name and not much else. This is now a tablet that magnetically attaches to a separate keyboard. To be honest, we are not the biggest fans of that design, as you end up carrying the entire shebang anyway and it always ends up being less convenient in its laptop configuration. You know, the one that enables you to do some real work, or play if you're so inclined. On the other hand, if you think you'll be using it as a tablet more than you will as a laptop, this is the way to go.

What a spec, though! It's coming with a 12" infinity display, which makes it case more similar to a 10" than a standard 12" device. The resolution is 4K at 3.840 x 2.160, there's the obligatory pen, 8MP camera in the back and a 5MP Skype camera on the front, a Thunderbolt 3 port for connecting displays and peripherals at up to 8 times the speed of USB 3.0. And the battery is promised to last up to 10 hours. The keyboard should not disappoint either, with Dell's recent history of excellence in that respect and the touchpad calls itself "precision". That should count for something.

If you've noticed certain similarities with devices recently launched into the fruity cargo cult followers' awaiting hands, you're spot on. We're basically talking about an improved version of Surface Pro 3. The competition in this space is definitely increasing. No wonder when the actual Surface Pro has been doing so well in the market.

Another interesting thing is that Dell has just signed an agreement with Microsoft to sell and support the actual Surface Pro line. So now you'll be able to chose from two similar devices from two different companies in one company's distribution channel.