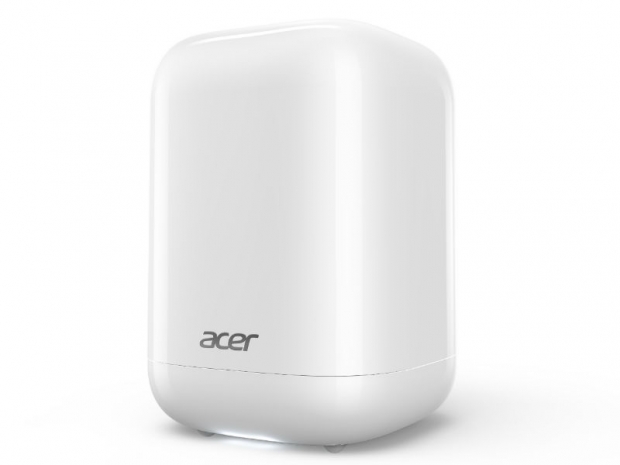 The Revo One RL85 has a couple of things going for it, and we’ll start with the design. The PC features a quite original chamfered box design, which could only be described as minimalism at its best. All ports are located at the back, save for the memory card reader and system LEDs on top.

The whole package measures 155x106x106mm (6x4x4 inches) and employs a passive, external PSU. The unusual form-factor allowed Acer to install two 2.5-inch drive bays, which is something we rarely get to see on mini PCs nowadays.

However, what really sets it apart from the rest of the field is Acer’s choice of silicon. While the Revo One RL85 is available with Haswell-based Core i3 and Celeron chips, it’s also available in eight different SKUs powered by 14nm Boardwell-based Core i3-5010U and Core i5-5200U processors. As far as RAM goes, most models ship with 4GB DDR3L, but they can handle 8GB as well.

Thanks to the extra 2.5-inch drive bay, Acer had a bit of fun with the storage setup on the RL85, so you can choose from a number of different options – standard hard drives, SSHDs, SSDs and a few combinations of each. The top-end model features two 2TB drives in RAID, backed by a 128GB SSD (presumably a M.2 drive). This is also the only version to ship with 8GB of RAM out of the box.

The Revo One RL85 is available in the UK, Germany, Austria and other major EU markets. Prices start at 329 EUR or 239 GBP, but the entry-level Celeron versions are coming in the first week of April. The more exciting Broadwell-based SKUs cost 150-250 more, depending on the storage configuration.

Oh, and if you are not sure about the all-white look, the Revo One RL85 will be available in black as well, with availability slated for May.

Last modified on 20 March 2015
Rate this item
(8 votes)
Tagged under
More in this category: « Intel Compute Stick listed in Europe Google fudges search results for advertising »
back to top