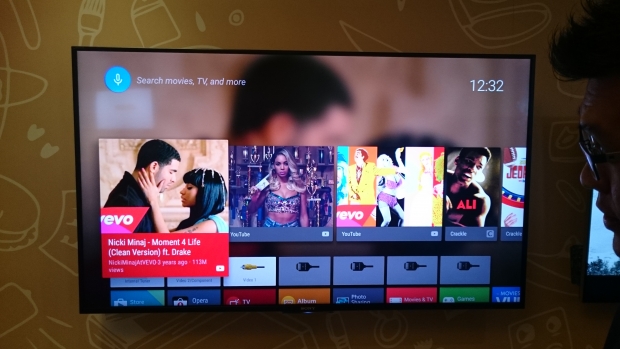 Lollipop Android 5.0 on a TV

The Sony TV it has a MediaTek MT5595 SoC, a  big.LITTLE quad-core design – in otherwords it packs two Cortex-A17 and two Cortex-A7 cores.

It was being shown off at a presentation by Masashi Imamura, President of Sony Visual Products.

After the presentation where Ching-Jiang Hsieh, President of MediaTek spoke about the great cooperation with Sony, the company mentioned that in has its SoC inside many smart TVs.

For MediaTek to have Sony on stage talking officially about its SoC is a great achievement. Back in 2004 Motorola has released Razr phone with ATI Imagination chip inside. At that time, AMD could not talk about its chip inside of Motorola Razr as Motorola didn’t allow it.

In 2015, Mediatek had a Sony President on stage at CES 2015 and he really praised its cooperation.

After the presentation we had a chance to play with the TV and it works great. It can play 4K, UHD, 3840x2160 content and the user interface was intuitive and user friendly.

It took us seconds to learn how to work with Sony remote mouse and the TV runs Android 5.0 Lollipop. There is a Play Store on the TV so you can install most of the applications, and selecting alternative output is really easy. We were so impressed that we took a short video how the TV works.

You can use voice search, you can use Android or iPhone app as a remote and Googlecast works out of your phone or tablet. There is a Miracast support for your Android or Windows 8.1 devices too.

This is a TV that should be on top of people’s upgrade list as it is really smart TV, responsive and user friendly. Sony got this one right, we just need to wait for the official release later in Q1 2015 and to see the price of this great machine.

Last modified on 15 January 2015
Rate this item
(4 votes)
Tagged under
More in this category: « Intel figures expected to be huge Intel’s mobile division lost $4.2bn last year »
back to top