Samsung has a chip ready

A modern phone with 2GB of memory works just fine and since all Android chips and the OS itself support 32-bit mode only, it doesn’t makes much sense to jump over 3.5GB anytime soon.

Still, 64-bit support for Android might be coming after all and Samsung has a solution for people who want more than 3GB on their phone. Samsung has announced the first 8 gigabit (Gb) 4GB RAM module based on low power double data rate 4 (LPDDR4 memory).

It is a 20nm chip and has the lowest energy consumption and higher density to date. Four 8Gb dies combine to offer a single 4GB module we should see them in smartphones and tablets in the near future.

With 3.1 Gbps bandwidth the new LPDDR4 can deliver a 50 percent speed boost over the existing DDR3 and LPDDR3 based chips. Samsung also claims that LPDDR4 will enable a data transfer rate per pin of 3,200 megabits per second (Mbps), which is twice that of the 20nm-class LPDDR3 DRAM.

The Samsung claims that the chip needs 1.1 volts which is 40 percent less than what you would need for 20nm DDR3 chips and mass production starts in 2014.

It is not known when we can expect to see phones and tablets based on LPDDR4 anytime soon, but a dreamer can hope that phones such as Samsung Galaxy S5 might end up using one. After all this should be the next big thing, at least this is what Samsung wants you to believe. 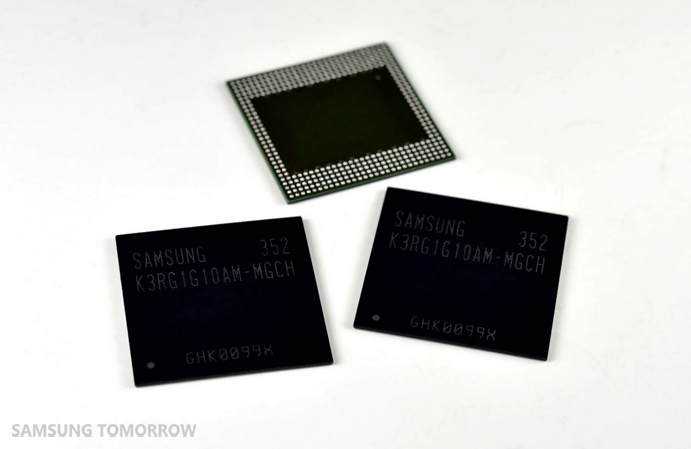