To be held in Shanghai on 14th of December

Galaxy and its European counterpart, KFA2, have announced its new World Legendary OC Event that will kick off in Shanghai, China on 14th and 15th of December and bring some of the biggest names in the graphics card overclocking community.

KFA2/Galaxy are bringing 20 world's best OC guys from various parts of the world, that will go head to head and try to beat some of the current world OC records as well as join in for Charity free fight overclocking, LOL gaming contest and a lot of other events.

KFA2/Galaxy definitely managed to get some impressive names and we are sure you will recognize a couple of them from current overclocking records.

The entire event will be streamed live at Overclocking-tv.com. 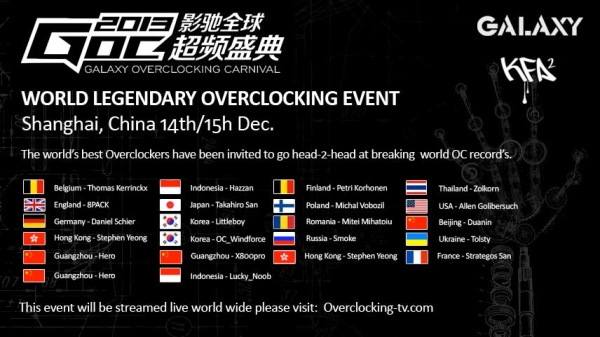