AMD has announced its third annual developer summit that will kick off on November 11th in San Jose, California. It's called APU13, and it is worth noting that previous AMD developer summits were pretty much where the Heterogeneous System Architecture (HSA) Foundation was formed. The developer summits hosted by AMD are certainly quite an interesting event and has become a thing to keep an eye on in the semicon industry.

Judging by the APU13 agenda, we'll see some updates from the HSA Foundation members that have been working on a standards-based heterogeneous compute (HC) ecosystem as well as the first AMD Ventures Innovation Summit that will shed some light on software and application development companies that utilize and expand uses for AMD solutions.

Phil Rogers, corporate fellow at AMD and president of the HSA Foundation noted that this year's summit will be used to build on the AMD commitment to lead the heterogeneous computing era and bring together technology influencers from all over the world to share in our vision and strategy for an open standard HC ecosystem.

Jon Peddie, principal and founder of Jon Peddie Research noted that previous two developer summits exceeded his expectations and were actually a place for an open and instructive exchange of ideas on software development, tools and APIs, free from the marketing hype that you get at many conferences.

AMD is certainly staying true to its commitement with the HSA Foundation as well as the heteregeneous compute ecosystem and fruits of its labor are certainly starting to be noticed.

You can check out more about the APU13 event here. 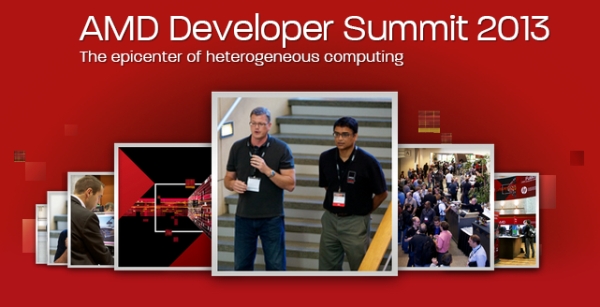 Last modified on 26 April 2013
Rate this item
(0 votes)
Tagged under
More in this category: « IBM boss furious with staff Microsoft has major win over Google »
back to top