Cebit 2013: First glimpse of Haswell board

A Haswell motherboard made an unscheduled appearance a whole quarter before the actual launch at MSI's booth at Cebit 2013. Obviously the board is not ready to launch, but it was cute to see that Intel refers to the board as Socket 115x as it doesn’t want to reveal the exact number of pins. If you want to count them you will end up with 1150 pins.

Obviously, the board is not backward compatible with Ivy Bridge or Sandy Bridge, so people who want to upgrade will have to start from scratch all over again.

The board is currently not painted in any fancy colours. It is done in reference yellow and looks like a throwback to the nineties, but at the end it will be coated in something cooler. 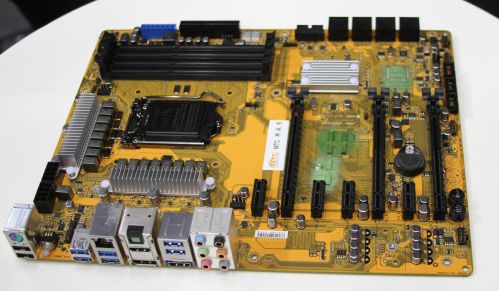 The lay out is quite nice, you can see three PCIe slots 16X as well as four additional PCIe 1X slots. Once can easily notice that the board will aim toward the upper market segment and should be a nice overclocker least due its high quality power components.

It still comes with a PS2 slot as well as two USB 2.0, six USB 3.0, two HDMI and a Display port. There is a place for optical audio, analogue audio and one network card. The back side hides eight SATA ports, diagnostic port, passively cooled chipset as well as four DDR3 memory banks. MSI sticks with this clean design without much logos on the front of the board, and it looks like it will stick with that for the future. 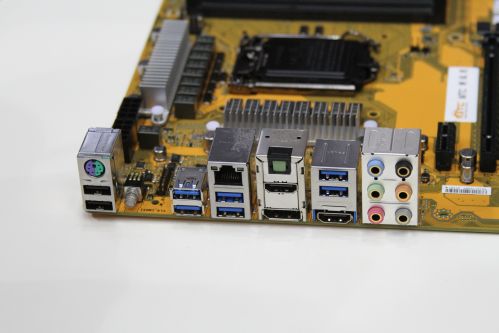 This is how the board of the future looks like, Haswell is just right around the corner, well Q2 (Computex launch).