Not FXAA, perhaps something different


A recent bit of news stemming from reliable sources close to Nvidia suggest that the company is preparing to introduce a new hardware based anti-aliasing technique with its 28nm Kepler family of GPUs. Over the past several months, hardware community forums have been ablaze in discussion over FXAA - or Fast Approximate Anti-Aliasing. Recognized for its good looks and efficient processing techniques, it has been featured in visually luxurious games such as The Elder Scrolls V: Skyrim, Batman: Arkham City and Battlefield 3. What Nvidia has in mind for Kepler, however, seems to be something different.

Roughly speaking, Fast Approximate Anti-Aliasing (FXAA) smooths edges in all pixels on the screen, including those inside alpha-blended textures and those resulting from pixel shader effects. It is a very fast anti-aliasing technique that has been found to be double the speed of 4x Multi Sample Anti-Aliasing (MSAA), which equates to about 12 to 13-percent framerate reduction to enable the more efficient FXAA.

But in a recent screenshot most likely sourced from Nvidia's GeForce Kepler press-deck, the company compares an ambiguously unrevealed anti-aliasing technique with 8x MSAA, in which it appears to give noticeably superior image quality. Some analysts have suggested that the unrevealed technique could be a heavily optimized version of Temporal Anti-Aliasing, a very compute-heavy technique that involves deriving a high resolution (see: larger than the output image) "temporal intensity function" from object attributes within the frame and then applying an "averaging filter" to compute the final anti-aliased image. 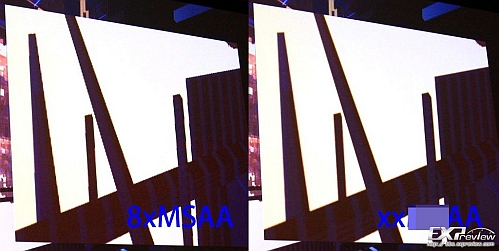 A larger version of the image can be found here.

In perspective, "temporal aliasing" is the result of the sample rate (i.e. number of frames per second) of a scene being too low compared to the transformation speed of objects inside of the scene. In other words,  this causes objects to appear to "jump" or appear at a location instead of giving the impression of smoothly moving towards them.

Considering the GPU compute power that 28nm Kepler possesses, it is very possible that Nvidia could be implementing this new technique. Then again, it begs the question why the company did not publicly demonstrate it at GDC 2012 along with its Kepler unveiling. One speculation insists that the company is keeping its new anti-aliasing technique under wraps until Kepler launches on March 22nd simply because it does not want AMD to draw comparisons and formulate "inflated" performance benchmarks against the Radeon HD 7900 Series. Of course, the world can only guess until the company decides to reveal the first two letters of its new xxAA anti-aliasing algorithm.