Only in the United Kingdom

A recent piece of news stemming from CNET claims that Samsung is preparing to ship its highly-anticipated flagship 55-inch 'Super' OLED HDTV this Spring. Unfortunately, the release will be limited to those lucky few residents in the United Kingdom with plenty of saved-up cash ready to expend.

We were able to see Samsung's 2012 OLED HDTV lineup during the 2012 Consumer Electronics Show in Las Vegas, Nevada earlier last month. While we were impressed with the incredible color accuracy, contrast reproduction and luminosity of the displays, we couldn't help but take away that there was a somewhat "unnatural" feeling to viewing them. Perhaps, through reverse psychology, it is possible that Organic LED is actually the most "natural" technology for viewing media content, and our eyes have been so deceived by lies of inferior display technologies all these decades. Nevertheless, the experience really is different from anything we've seen, and when contrasted with LED-backlit LCDs and Plasma displays, there is a significant difference to take away from Samsung's 'Super' OLEDs. 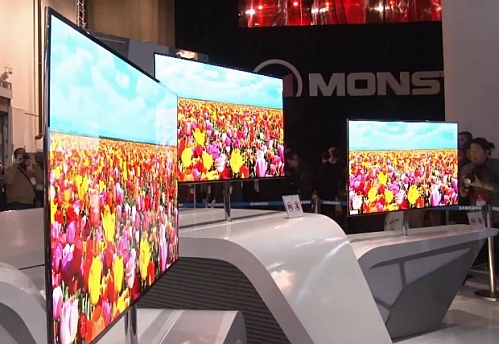 Of course, the company is also incorporating its new "Active 3D" technology in these panels, meaning users will have the choice of enabling stereoscopic viewing modes with the included passive 3D glasses.

Exact price points and Spring 2012 release dates for Samsung's 'Super' OLED HDTV displays have not been published yet, but we will keep on the lookout for early listings from online UK vendors.