Hybrid mouse-pointer the size of a small battery

During CES 2012, there was one manufacturer's booth we had anticipated to experience but never had the opportunity during the hustle and bustle of the convention. That manufacturer is Logitech, and it appears that the company has announced a particularly interesting hybrid mouse-pointer device for notebooks, tablets and other ultraportable computing devices.

On first glance, Logitech's Cube Mouse takes on a particularly unusual shape that marks a radical departure from its traditional lineup of ergonomically crafted products with curved edges and aesthetically pleasing contours. We can't seem to refrain from noticing, but the device takes on more or a rectangular shape than a square shape and probably should have been named the Logitech Rectangle. Regardless, it has been designed specifically for dedicated road workers who constantly desire ultraportability from their presentation setup and hardly use a dedicated mouse for long hours. According to the press release, Logitech states that the device "offers everything consumers want in a mouse and effortlessly becomes a presenter when needed." 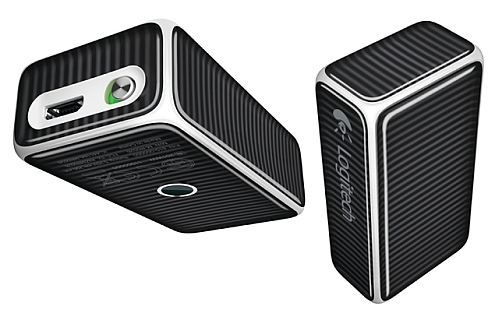 We journalists at Fudzilla believe the device could be particularly useful when coupled with an ultrabook or similar lightweight form-factor mobile computing device. For instance, the Cube Mouse could be inserted into your non-smartphone pocket right next to your keys and would be small enough to carry around all day without becoming uncomfortable on the go. Logitech has stated that the device is roughly the size of one AA battery, which makes it perfectly ideal for pocket-sized transportation without the need of a carry-on bag.

In terms of scrolling smoothness, Logitech has stated that its Flow Scroll software delivers "a smooth scrolling experience similar to your favorite touchscreen smartphone." We will report back on the accuracy of this statement when we can get some hands-on time with the device.

Nevertheless, the mouse comes bundled with a 2.4GHz Logitech Unifying USB receiver for connectivity to any USB-ready computing device with a small-enough form factor to stay plugged into a netbook, notebook or tablet without having to be removed from the device for transportation.

Logitech's Cube Mouse will be available at the end of January 2012 in both the United States and Europe with an estimated MSRP of $69.99 when it launches.

Rate this item
(0 votes)
Tagged under
More in this category: « Internet is now home to 2.1 billion active users iPad 2 iOS 5.0.1 untethered jailbreak demoed on video »
back to top