In the third quarter of this year, the world's largest online social network is expected to surpass 1,000,000,000 (one billion) users, according to digital marketing firm iCrossing.

There was a time in 2006 when MySpace, a social networking service now owned by Specific Media LLC and pop star Justin Timberlake, had reached a peak number of online users and was deemed the world's most popular online social network. In December 2006, Facebook had acquired a mere 12 million active users and was able to magically initiate an exponential user install base in the years following. MySpace's empire was on the verge of decline by the second quarter of 2008. Facebook, according to comScore, pulled in 123.9 million unique visitors in the month of May 2008, beating MySpace's 114.6 million active users in the same month.

Digital marketing firm iCrossings projected Facebook's 2012 userbase by using a process of linear regression on data from 2H 2008 and onwards, placing particular emphasis on data between mid-2006 and mid-2008 where the social network was growing at an exponential rate. According to their research, more recent data suggests that the social network is now growing in a linear fashion. 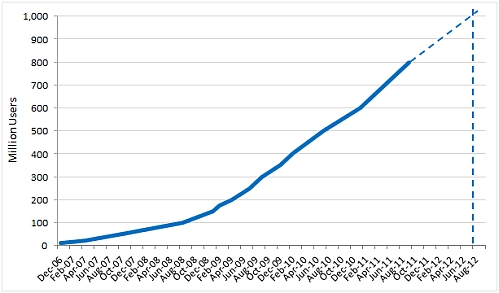 Source: iCrossings - Facebook To Hit A Billion Users This Summer

Nevertheless, Facebook's userbase has exponentialized to roughly 800 million users as of December 2011 thanks to inroads being made in "developing countries" such as India and Brazil, where 36 million and 30 million users are spending more time socializing online and building digital interest graphs around their favorite activities and experiences. It is safe to say that Facebook shows no signs of userbase decline over the next several quarters and will continue to ramp up its efforts to sustain its top status as the number one social website in history as of today.

Last modified on 14 January 2012
Rate this item
(0 votes)
Tagged under
More in this category: « Foxconn resolves dispute with workers in China 3rd-gen iPad to use quad-core CPU, Retina Display, 4G LTE »
back to top