The new model retains the sleek appearance of its predecessor, but it packs a bit more oomph under the bonnet. It is based on Intel’s Atom D525 dual-core, clocked at 1.8GHz and it packs Nvidia ION2 graphics with 512MB of memory.

The Edge-HD2 ships with 2GB of memory, 320GB hard drive, WiFi, card reader and Sapphire have managed to squeeze a couple of USB ports, LAN, VGA and HDMI in the back. 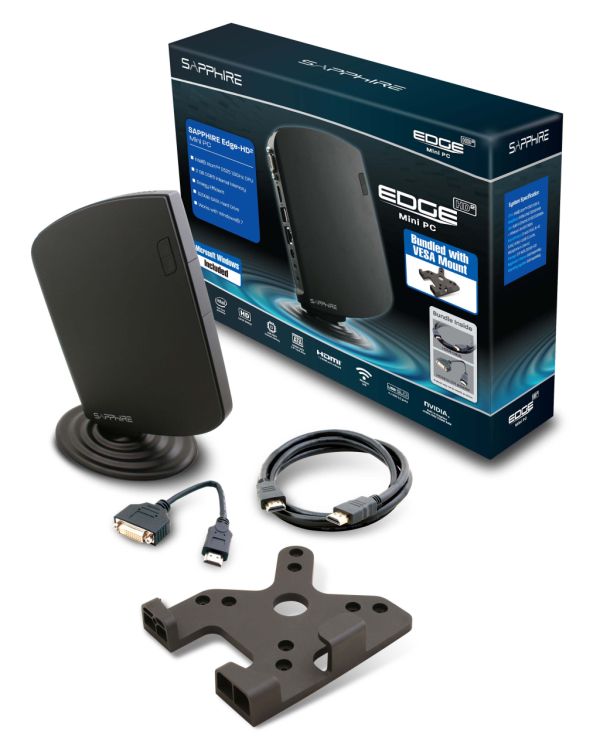 It’s worth noting that the Edge is one of the smallest nettops on the market and you would be hard pressed to find anything so compact. It weighs a meager 530 grams and measures just 19.3x14.8x2.2cm across. It also ships with a VESA mount, so you can stick it at the back of your monitor.


The price tag isn't as tiny. Early listings place it at slightly above €350 in Euroland with preinstalled Windows 7 Ultimate 64-bit. The previous model is about €100 cheaper, but it is based on a slower Atom CPU, has a slightly smaller hard drive and ships with no OS. In case you’re on a tight budget or if you prefer Linux it is still a pretty good alternative, or you can just wait for an HD2 SKU with no preinstalled OS.

Last modified on 30 June 2011
Rate this item
(5 votes)
Tagged under
More in this category: « US suspects China of cyber sabotage campaign Apple might have to breach its code of secrecy »
back to top