It looks like AC Ryan will bring even more surprises in the next year as they have just detailed a quite interesting new media player, the AC Ryan Fluxx. Featuring Intel's Atom CE4150 CPU, 400MHz graphics and a whole lot more, it should be a top notch media player.

In case you forgot, or somehow managed to miss this one, the Intel SoC Atom CE4100 series was announced back at IDF 2009 and it is quite a monster considering that it can decode two 1080p streams, has support for Adobe Flash Player 10, support for both DDR2 and DDR3 memory, integrated NAND controller, hardware decode for MPEG4 video and 512K L2 cache.

Now we will get back to AC Ryan Fluxx and we are honestly impressed considering that this one packs Intel's CE4150 clocked at 1.2GHz and backed by 1GB of DDR3 memory and 2GB of extreme on-board NAND-flash memory.

As far as the press release goes, the graphics are simply described as "400MHz extreme graphics" but further digging around found that the core might actually be the PowerVR SGX535, the same GPU that we have seen in Intel's GMA 500 and Apple's A4 chip that is happily running in iPhone4, iPad, iPod Touch 4th gen and AppleTV.

The rest of the specifications include Gigabit Ethernet, optional 802.11n via USB dongle and built-in HDD with up to 2TB of space via SATAII port, card reader, HDMI, Composite, Component and SP/DIF outputs as well as HDMI input, two USB 2.0 ports and one USB 2.0 host port and much more.

The full feature list includes Video on Demand (VOD), Social Media, Internet Browser, Games, Movie and Music Jukebox, Widgets, User Interface Customisation and Internal Storage Capacity. The things that caught our eyes are the USB keyboard and mouse support as well as AC Ryan's QWERTY Remote Control. As you remember, back when we reviewed AC Ryan's media players, we only missed the browser and the USB keyboard/mouse support which would made the HTPC basically useless, and it looks like that AC Ryan just did that.

It supports almost every known audio, video, subtitle, image, and streaming format and protocol and should be quite interesting once it hits the market. Of course, AC Ryan has left all the juicy details for CES 2011, but we are quite sure that we'll at least get a glimps of it next week. Until then, you can check out more here. 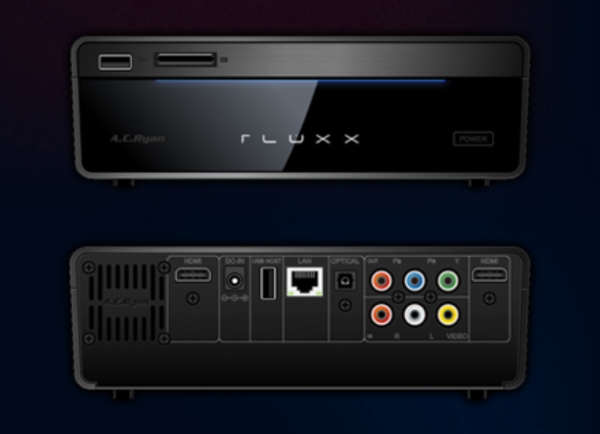 Last modified on 02 January 2011
Rate this item
(6 votes)
Tagged under
More in this category: « Oracle changes license of Berkeley Database Cisco to cut up to 10,000 jobs »
back to top