In case you were wondering about the future of optical storage after Blu-ray, including its handover to alternative flash-based formats, Sony has a statement particularly geared towards those wide-eyed cynics and pessimists from every corner of the Internet – by no means does the optical storage format plan to die anytime soon.

Even as Blu-ray continues to experience growing pains in a market overwhelmed with DVDs, a new report from the Examiner states that Sony is working in conjunction with Japanese researchers from Tohoku University to develop a next-generation “blu-violet ultrafast pulsed semiconductor laser” that will be able to store 1TB of data on a single optical disc. 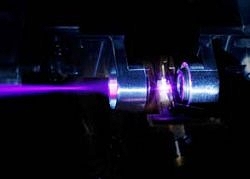 From the press release:

“This latest successful development is an all-semiconductor laser picosecond pulse source with a laser wavelength of 405 nanometers (same wavelength as Blu-ray) in the blue-violet region. It is capable of generating optical pulses in the ultrafast duration of 3 picoseconds (1 picosecond = one-trillionth of a second), with ultrahigh output peak power of 100 watts and repetition frequency of 1 gigahertz. Advanced control of the newly-developed and proprietarily-constructed GaN-based mode-locked semiconductor laser and semiconductor optical amplifier have enabled peak output power in excess of 100 watts to be achieved, which is more than a hundred times the world’s highest output value for conventional blue-violet pulse semiconductor lasers.”

The two institutions noted that their system eliminated the need for a “bulky” light source and “specialist technician” to run previous lasers with similar qualities. “There are high expectations that this newly-developed semiconductor laser system, which incorporates semiconductor diodes, will be able to be used in a much wider range of applications in the future thanks to technology such as this, which enables the size of devices such as the light source box to be drastically reduced.”

Ryan Fleming from DigitalTrends notes that the battle for next generation optical storage is well underway, and it will be fierce. In April, the Blu-ray Disc Association released a press statement highlighting new format enhancements of the Blu-ray technology, including discs that could store up to 128GB. Less than a month later, researchers at the University of Tokyo claimed to have discovered a new, cheap and easily created material that could store up to 25TB on a single disc. The new 1TB format, in comparison, is expected to hold the equivalent of 106 dual-layer DVDs on a single disc.

Japanese news sources have also gone on record to give more quantified values to the laser announcement. The Daily Yomiuri Online wrote that the new optical format is expected to allow 20 times the storage capacity of a single layer Blu-ray disc. This makes sense, as a single layer Blu-ray disc holds roughly 25GB of data. The real question to ask in the near future will be in regards to the type of content distributed on the new optical format, and whether it will include any sort of “DRM-like” restrictions. Let’s just hope Sony has learned wisely from its past mistakes in digital content protection before the consumer electronics industry unleashes 4K (Quad-HD) video content to the masses.

Last modified on 28 July 2010
Rate this item
(0 votes)
Tagged under
More in this category: « AMD dismisses rumoured Oracle deal Microsoft shoves a computer into a room »
back to top