A.C.Ryan has announced yet another home media player that will be a nice addition to its Playon!HD and Playon!HD Mini players that have already caught a lot of attention. The new Playon!DVR HD features all the goodies that we've seen on the Playon! HD and adds even more with dual Digital TV tuners.

The new Playon! DVR HD player has 227x165x60mm dimensions and weighs around 1.5kg. There will be a couple of SKUs depending on the capacity of the internal HDD. The connectivity includes HDMI, Composite, Coaxial and Optical outputs, USB and eSATA, card reader, and Ethernet port.

It features a single module DVB-T tuner card with twin tuning capability, which means that you can watch and record different channels at the same time. It also comes with FTP support so you can connect to it via web. This time A.C.Ryan also decided to include a small LED display on the front side of the player.

The new A.C.Ryan Playon!DVR HD player should be available pretty soon with price tag starting at €229 for the barebone version without the HDD. It will available in four other versions as well, ranging from €260 for the version with 500GB HDD to €399 for the one with 2TB HDD. 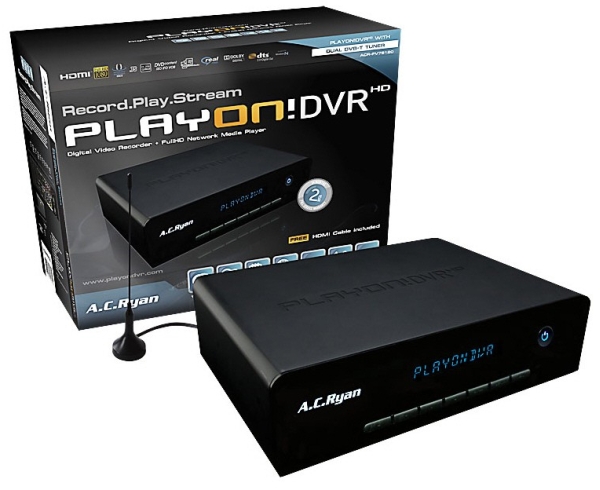 Last modified on 23 July 2010
Rate this item
(0 votes)
Tagged under
More in this category: « Google might not have a JPG killer Microsoft employee accused of groping teen »
back to top