Multi-platform is much better than proprietary

In an effort to make a ridicule out of Apple’s proprietary FaceTime video calling platform for the iPhone 4, a software developer at Adobe has concocted a clever comeback named “FlashTime,” a peer-to-peer video calling solution for Google Android-based smartphones, desktop clients and any other Adobe AIR capable devices. 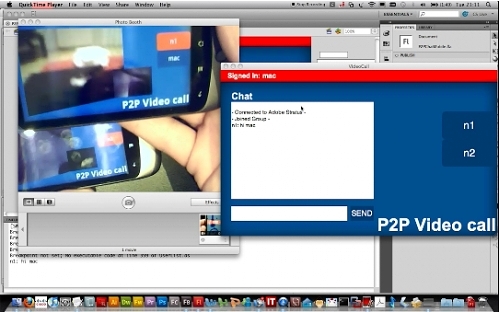 The software, prepared by Adobe Flash Platform Evangelist Mark Doherty, serves as a video chat client similar to Apple’s FaceTime chat by harnessing an Android-powered smartphone’s front-facing or back-facing cameras, and can initiate a video conferencing session among Android devices as well as desktop systems running Adobe AIR. Nevertheless, it appears that Doherty figuratively dislodged his tongue from his cheek when he mentioned the software’s name was a combination of the Flash multimedia system and Apple’s proprietary video conferencing software for the iPhone 4.

In order to avoid potential legal battles and steaming rage from the fruit-themed toymaker, Adobe’s “FlashTime” demo has since been renamed to a less amusing “P2P Video Calls on Android,” but its core concept remains unchanged. The software was demonstrated on a Google Nexus One smartphone running Adobe AIR 2.5 and is said to be “at feature parity with the desktop Flash Platform.” Adobe’s biggest claim in this demonstration is merely the fact that Adobe Integrated Runtime (AIR), unlike Apple's FaceTime chat, is multi-platform and can be used on a variety of mobile devices and their stationary desktop counterparts.

In a recent beta build, Mark Doherty’s development team has added Camera, Microphone, StageWebView and NativeExtensions features to the P2P video chat software along with all of the Flash Player 10.1 features many have come to know and love. These include native multi-touch and gesture support, bitmap matrix caching support and geolocation APIs.

Engadget was able to briefly get in contact with Doherty regarding the company’s P2P video calling development plans. Unfortunately, he went on record to say that Adobe has no plans to release this mockup client as it was a simple feature demo to show that the Adobe AIR platform on Android devices can be used for video calls. Of course, the company has pointed out that are already alternative options for video chat available on Android smartphones, including Fring and Skype, and that they feature cross-platform clients as well.

“The code isn’t exactly stable so I don’t want to release it just yet,” says Doherty on FlashMobileBlog. “I hope I can finish it by next week, by which time it will have a name. I changed the name of this demo since it’s not an Adobe Flash Platform product, which caused some confusion. There aren’t plans currently to release this as a product, however I will publish the source code for all.”

Last modified on 21 July 2010
Rate this item
(0 votes)
Tagged under
More in this category: « Google refuses to help coppers with their inquiries DirecTiVo release still a mystery »
back to top