Review: No price premium for OC and custom coler

Gigabyte was among the first AIB partners to hit the market with a non-reference and factory overclocked Radeon R9 280X card. It uses a custom PCB and the company’s well known WindForce cooler with three fans. We already had a chance to see the WindForce cooler in action and most AMD partners decided to reuse older coolers on their R9 280X, which is understandable. Today we’ll see what Gigabyte managed to pull off with its WindForce version and whether it’s any different than the HD 7970 GHz Edition WindForce card. The card we are reviewing today is officially known as the GV-R928XOC-3GD. 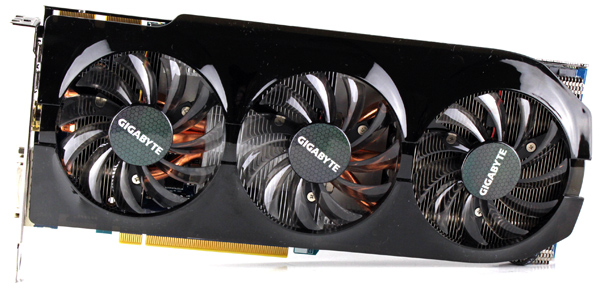 The R9 280X is part of AMD’s latest generation of graphics cards known under the Volcanic Islands codename, but it’s not exactly new. Following the new naming scheme the Radeon R9 280X was previously known as the HD 7970 GHz Edition. Because the same Tahiti GPU is on both cards the performance difference between the R9 280X and the HD 7970 GHz Edition is practically non-existent.

For their part, AMD partners tried to make the R9 280X a bit more appealing any way they could, so their new cards are evolutions of old HD 7970 designs, with a few improvements. Bear in mind that the HD 7970 was launched on December 22 2011, while the GHz edition showed up six months later, on June 22 2012.

At first glance you probably won’t be able to tell the difference between a Radeon R9 280X OC WindForce and a Radeon HD 7970 GHz Edition, because both cards sport the exact same WindForce cooler. They also share the same connector layout – one dual-link DVI, one standard HDMI and two mini-DisplayPort connectors.

New R9 280X cards are a bit better when it comes to using multiple displays thanks to AMD’s firmware updates. If you are using a three-monitor setup, you no longer have to use DisplayPort for the third one; you can use two DVIs and an HDMI connector, or two HDMIs and a single DVI. Sadly Gigabyte didn’t change the layout, so the third monitor will still have to be connected via DisplayPort. 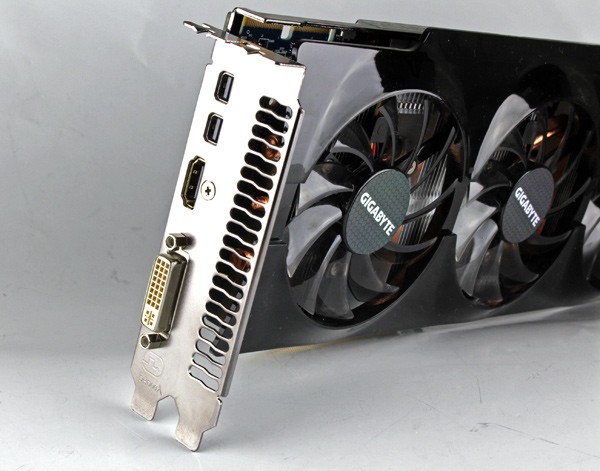 The R9 280X is based on the 28nm Tahiti XT2 core (4.3 billion transistors) which features 32 compute units and 2048 stream processors based on Graphics Core Next (GCN) architecture. Next to that we have 32 raster operation units (ROPs), 128 texture memory units (TMUs) and six 64-bit memory controllers meaning 384-bit memory interface connected to GDDR5 memory. The R9 280X card is strapped with 3GB of GDDR5 memory, which will be of much use to gamers running at resolutions above 1920x1080. All in all we have exactly the same set of components presented in the Radeon HD 7970 GHz Edition. DirectX 11.2 is supported along with OpenGL 4.3 and AMDs own new low level programming interface known as Mantle (which is also supported on all AMD cards based on GCN).

During its latest event AMD also announced TrueAudio feature, but this hardware-accelerated audio processing feature is no supported by older GPUs, including Tahiti parts. At the moment, only Bonaire and Hawaii based cards support TrueAudio.

The Gigabyte Radeon R9 280X OC WindForce comes with factory overclock. This means the GPU clock is set at 1100MHz, while the GDDR5 memory ticks at 1500MHz (6000MHz effective), compared to 1000MHz for the GPU on the reference card. The memory is left at default clock what is disappointing given that many AMD partners releasing factory overclocked R9 280X cards with overclocked memory. We’ll see how Gigabyte’s card responds to memory overclocking a bit later.