EVGA is currently offering a total of eight different GTX 760 cards, so even if we decide to pick up a GTX 760 from the house of EVGA, we still have to choose one of them. Of course, the cards differ in the type of cooler, amount of memory and factory clocks. Some ship with 2GB of memory, while some have 4GB, there’s a choice of dual or single fan coolers and a range of factory overclocked cards, with the GTX 760 FTW clocking in at 1085MHz.

Today we’ll take a look at the recently introduced GTX 760 Superclocked 2GB with an ACX (Active Cooling Extreme) cooler. We already had a chance to try out the ACX cooler when we tested the GK110-based GTX 780. However, the ACX cooler used on the GTX 760 is different in a few ways. Obviously it is shorter, since the card is shorter than the GTX 780 and it also has to deal with a lot less heat.

Aesthetically it closely resembles the original ACX cooler, as you can see. 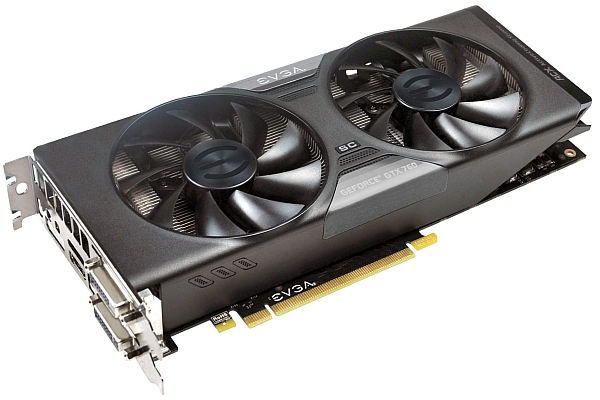 The standard memory configuration for the GTX 760 is 2GB of GDDR5 memory, but some partners including EVGA have introduced 4GB cards as well. On the whole the GTX 760 seems to be finely tuned for 1080p gaming, and it is also direct threat to the ageing GTX 670.

The EVGA GTX 760 SC ACX comes factory overclocked from reference 980MHz to 1072MHz for the GPU, while the memory is left at reference 1502MHz (6208MHz effectively).

The GTX 760 is PCIE 3.0 compatible and it will allow you to play games with enabled physics (PhysX), to improve graphics effects  by using HBAO or advanced anti-aliasing techniques (FXAA/TXAA) and of course the card has enough power for smooth 3D gaming (3D Vision).

Following the introduction of the GTX 760, Nvidia’s complete Geforce 6xx/7xx lineup consists of the following cards: