Nvidia apparently thought there is enough of a performance and price gap between the GTX 650 Ti and GTX 660, so it went ahead and developed the GTX 650 Ti Boost, which should plug the gap nicely. It is also worth noting that AMD introduced another mid-range card at about the same time, and that’s what it usually takes to get Nvidia’s tail wiggling.

As the name suggests, the GTX 650 Ti Boost features Nvidia’s GPU Boost technology, which was not employed on the plain GTX 650 Ti. GPU Boost allows the card to boost GPU clocks depending on load and temperature.

A simple clock boost with no additional changes would not have ensured the new Boost card a significant performance edge over the GTX 650 Ti. Luckily Nvidia had a few other tricks up its sleeve, so it widened the 128-bit memory bus to 192 bits, greatly improving bandwidth on the new card. In fact, thanks to the new bus and speedier memory chips, the new card has 66 percent more bandwidth compared to the plain GTX 650 Ti.

We didn’t have a chance to try out a reference card, but we got something a bit better instead, EVGA’s GTX 650 Ti Boost Superclocked. The Superclocked card features base GPU clock at 1072MHz, while GPU Boost ups the clock to 1137MHz.

As you can see from the table below, the reference clocked GTX 650 Ti Boost is quite a bit slower than EVGA’s Superlocked card. EVGA did not overlock the memory though.

The EVGA GTX 650 Ti Boost Superclocked is supposed to deliver high visual quality in games, with in-game detail settings cranked all the way up to High. We’ll see whether it lives up to this promise in our benchmarks. All we can say so far is that it is looking good, at least on paper and in GPUZ. 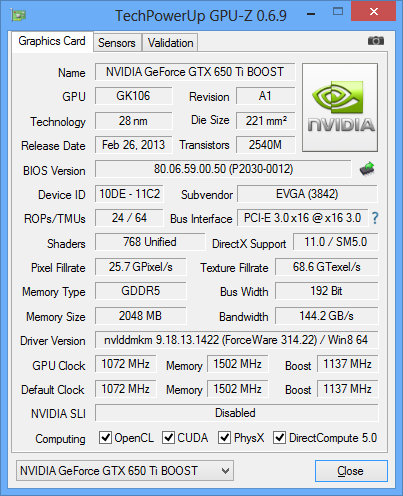