Sapphire rolled out its latest HD series nettop today, and the HD3 is quite a looker. Based on AMD’s Brazos it is faster than its Intel based siblings and it has a few extra features.

The HD3 is powered by AMD’s E-450 APU with HD 6320 graphics. It packs up to 4GB of RAM and up to 500GB of storage, which is plenty in the nettop world. In terms of features, the HD3 is second to none. Like most AMD nettops, it comes with a couple of USB 3.0 ports, along with HDMI and the usual array of VGA, LAN, USB 2.0 connectors. The only thing missing is eSATA.

The HD3 is one of the smallest nettops on the market, it’s just 22mm thick and weighs less than 600g. Like the HD2, it’s encased in a matte black chassis that can take quite a bit of punishment, which makes it a good choice for anyone who wants a portable desktop that can fit in any bag, i.e. one of our editors.

There is no word on pricing yet, but we expect it to sell for about €300. 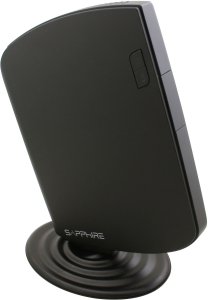