Courtesy of the Android-x86 project

One of the more interesting developments to come out of CES 2012 in Las Vegas is an AMD-powered x86 tablet that runs Google's Android 4.0 Ice Cream Sandwich operating system. At AMD's booth, the company was demonstrating an MSI WindPad 110W powered by an AMD Brazos x86 processor. The tablet features a 10-inch display with 1280 x 800 resolution, 4GB of DDR3 memory, a 32GB solid state disk, two full size USB ports, a mini-HDMI port and was being demonstrated with Google's new Android 4.0 Ice Cream Sandwich operating system.

Back in May 2011, there were talks around the Web of a startup called BlueStacks that had developed a native Android runtime environment for the Windows operating system. Traditionally, running Android software on a Windows PC involved emulation. The entire emultation setup would involve a considerable amount of performance overhead, and the outcome to ultimately produce somewhat undesirable results. BlueStacks was able to overcome this emulation performance barrier by building a native x86 Android runtime that runs on its own software stack and doesn't suffer from any of the lag associated with Google's Android emulator. 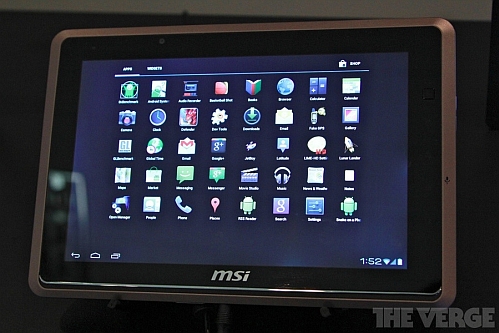 But rather than running on an independently-developed software stack, it appears that the AMD-powered x86 tablet is taking advantage of progress in the Android-x86 project - a large scale open source project that simply seeks to port Android directly to the x86 architecture. 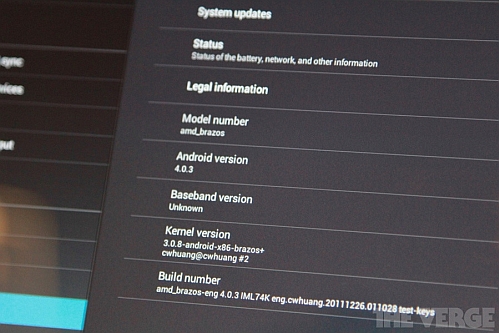 For those of you who already own an x86-based tablet, the Android-x86 project is proud to announce that a beta ISO for Android-x86 AMD Brazos can be downloaded here. Unfortunately, AMD has stated that it doesn't officially support the community's efforts and that we shouldn't expect AMD-based tablet devices to run Android in the near future.

Last modified on 24 January 2012
Rate this item
(0 votes)
Tagged under
More in this category: « RIM stock declines 8.4% following CEO step-down YouTube gets 4 billion hits a day »
back to top