Review: Overkill or just what the doctor ordered?

Point of View / TGT GTX 580 3GB Ultra Charged is specially designed high performance graphics card for enthusiast who like to play games at very high quality settings and resolutions (above 1920) with the highest antialiasing allowed.

Just to refresh your memory – reference Geforce GTX 580 cards come with 1.5GB of memory, which disappointed many enthusiasts. Naturally, whether average users need more than 1.5GB on a GTX 580 is debatable. Most apps and games don't really need massive video buffers but the fact that several Nvidia's partners have launched 3GB versions shows that there indeed is demand for such cards.

Point of View not only doubled the memory capacity of GTX 580 but tapped into TGT overclocking team's experience as well. The result is the fastest GTX 580 3GB card on the market. The core ticks at 841MHz (reference clock is 772MHz) and the memory was overclocked from 4008MHz to 4104MHz.

Such high clocks mean increased temperatures as well and we expected to see PoV/TGT strapping the card with some kind of special cooling. However, once we opened the box we saw Nvidia's reference cooler. 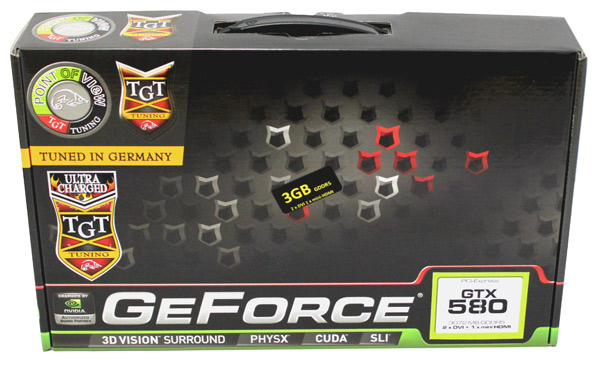 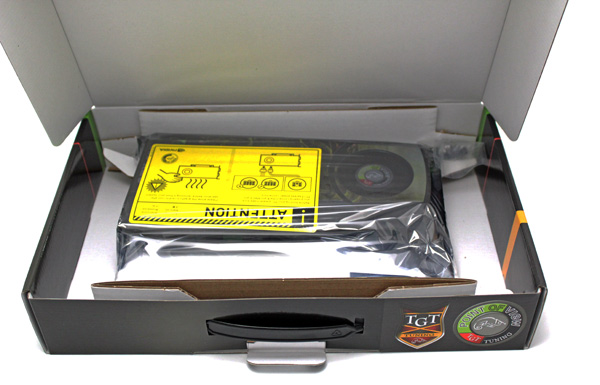 That's not to say that reference cooling doesn't do a good job on reference GTX 580 cards; it works great but gets quite loud at higher overclocks. We'll soon see whether it can handle PoV/TGT GTX 580 3GB Ultra Charged.

The card is powered via one 6-pin and one 8-pin connector. 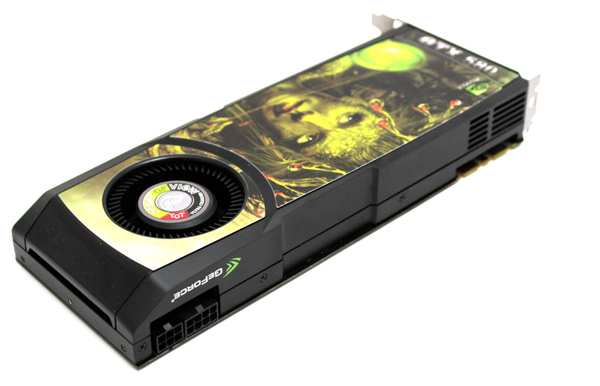 Video outs are standard as well – two dual-link DVIs and one mini-HDMI (mini-HDMI-to-HDMI dongle is included). Air outlets above the video outs are wider than usual in order to let hot air out. 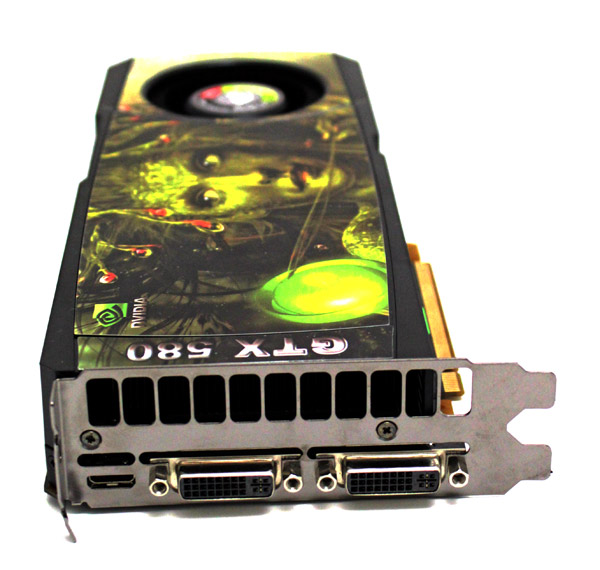 For our testing, we used standard game settings and one display with maximum resolution 2560x1600.

The GTX 580 3GB UC kartica outran the refefence version by 6%. Although you can't tell from the results, GTX 580 3GB UC provided a much smoother gaming experience at the highest tested resolution, most likely because minimum fps was better than on the reference card.

We've noticed that the video buffer on our GTX 580 was almost always topped out, whereas the GTX 580 3GB UC had memory to spare. You can see that on the GPUz screens below. 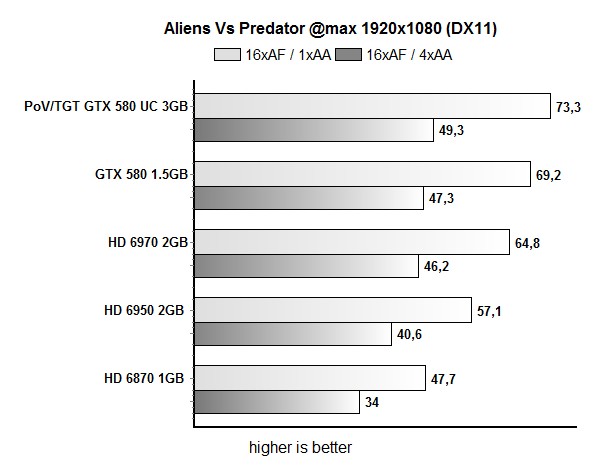 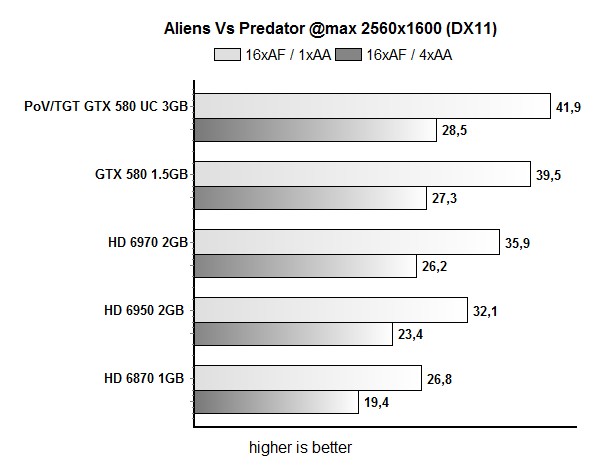 We noticed that the game requires more than 2GB on many occasions (up to 2268MB), which is more than reference GTX 580 cards can offer. 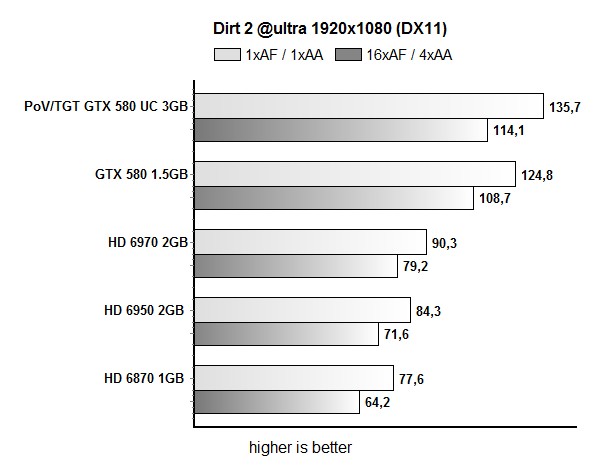 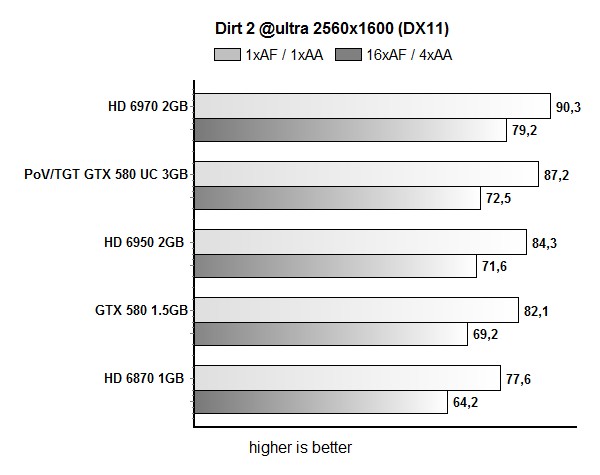 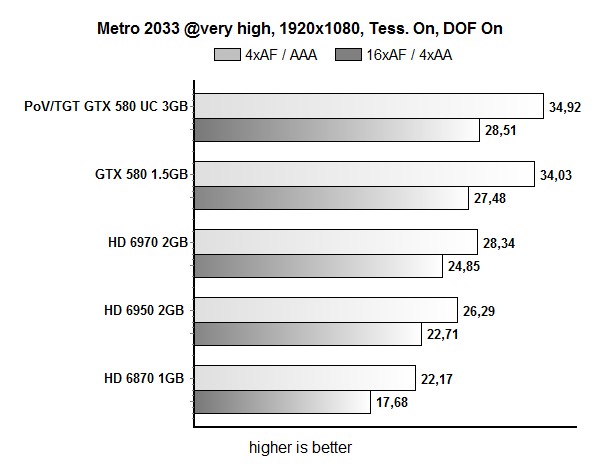 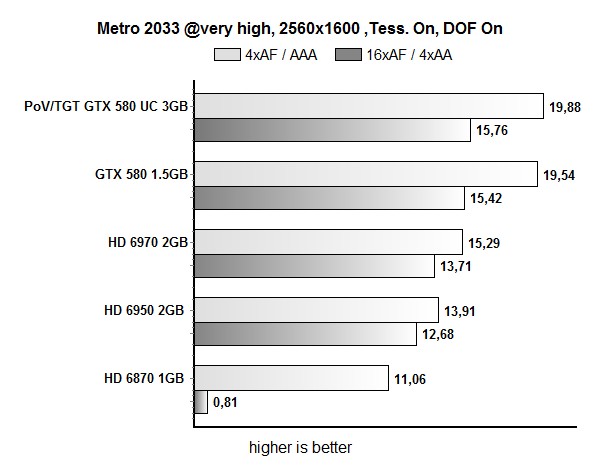 We took the new Crysis 2 DX11 with high texture packages out for a spin, but the game used only 1.7GB of memory. Playing Crysis 2 at 2560x1600 with all effects on was much better with GTX 580 3GB UC than with the reference card. 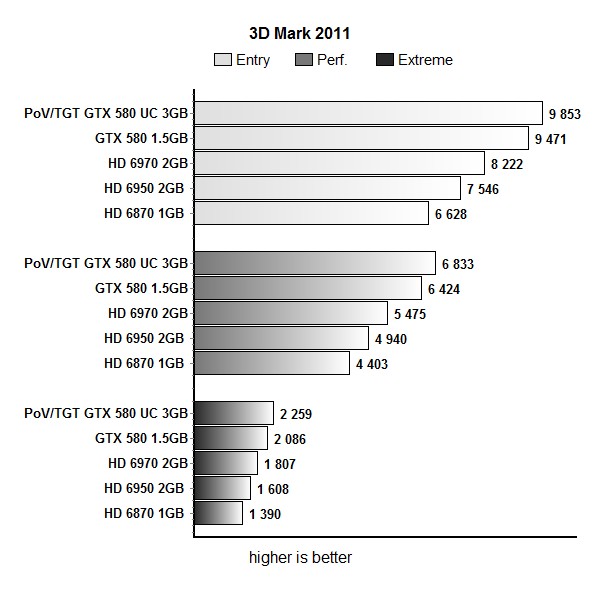 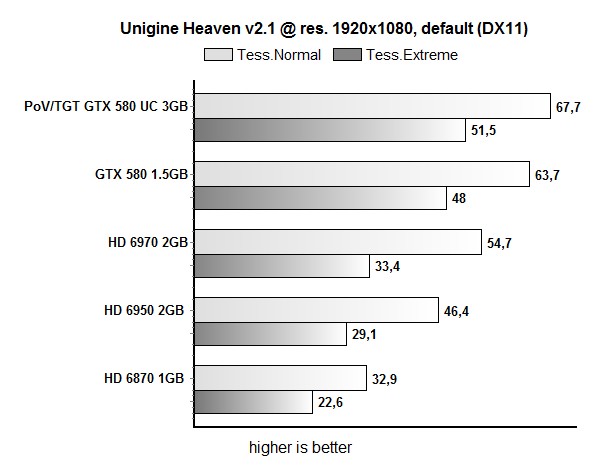 The GTX 580 3GB Ultra Charged comes factory overclocked to 841MHz. TGT handpicked the crème of the crop GPUs or these cards but the cooling is not adequate for additional overclocking.

The GTX 580 3GB Ultra Charged uses reference cooling that has a tough time tackling such high clocks. GPU temperatures can hit 98°C, which is about 10°C higher than on reference cards. Such temperatures coupled with fan noise discouraged us from attempting further overclocking.

We tested several games at 2560x1600 but we needed more than 1.5GB of memory only in rare cases. Although 3GB of memory sounds enticing, anyone who's less than hard-core gamer would do just fine with the reference GTX 580 1.5GB version. PoV/TGT aren't targeting uninformed customers who consider RAM to be the measure of GPU power, but rather informed gamers who like to know that they will never be limited by available memory. If you’re looking to use the card for scientific purposes and tap into CUDA, then you’ll probably love the 3GB version – it will allow for twice as much data in the memory.

Several Nvidia's partners have already launched 3GB versions of the GTX 580, which means that the demand exists. While there are only few games that can put the 3GB to use, we're hoping to see more by the year's end.

Our testing revealed that 2560x1600 gaming will suffer from GPU speed limitations more often than memory limitations. The 3GB version is also useful for SLI. If you use two reference GTX 580 cards with SLI, you have 2x 1.5GB and not 1x 3.0GB. With 2x 3.0GB versions, you have both the performance and the memory to support very high resolutions. Of course the 3GB version is also very useful for games which support multiple monitors.

Investing in future is not always an easy decision to make, especially if the ‘future’ costs €540 here. PoV/TGT GTX 580 UC card with 1.5GB goes for about €90 less.

We would've liked a better cooler on the GTX 580 3GB Ultra Charged. Compared to the reference version, our today's test sample was much louder and hotter.

The card packs a nice punch, there's no doubt about it, but unless you're an enthusiast or know exactly why you need 3GB of memory, we'd recommend you to stick with the more affordable, reference GTX 580 with 1.5GB of memory.