Recently we learned a bit more about Samsung's plan to make its own mobile GPU. If successful, it will cause a disturbance in the force, but here are the raw performance numbers that we gathered for your better understanding.

We used GFLOPS (Giga FLoating-point Operations Per Second), 1 GFLOPS is a billion floating-point calculations and this is a term usually used in measuring compute performance. Currently most Samsung SoCs use ARM-designed Mali graphics, while Apple is using PowerVR. Qualcomm is using Adreno in-house graphics and of course Nvidia is using Geforce graphics.

The Exynos 5433/7410, the SoC used in the Samsung Galaxy Note 4, is the company's latest 20nm application processor based on Cortex-A57 and Cortex-A53 cores (big.LITTLE with GTS). The part uses a Mali-T760 MP6 GPU clocked at 700MHz. This GPU is capable of pumping out 206 GFLOPS, which is a quite high number for a mobile GPU. This is much better than the Apple A8 with PowerVR GX6450 quad-core graphics, as this one can churn out 115.2 GFLOPS at the 450MHz default clock. However, the Apple A8X powered with an eight-core PowerVR GX 6450 and clocked at 650 MHz can deliver 332.8 GFLOPS. 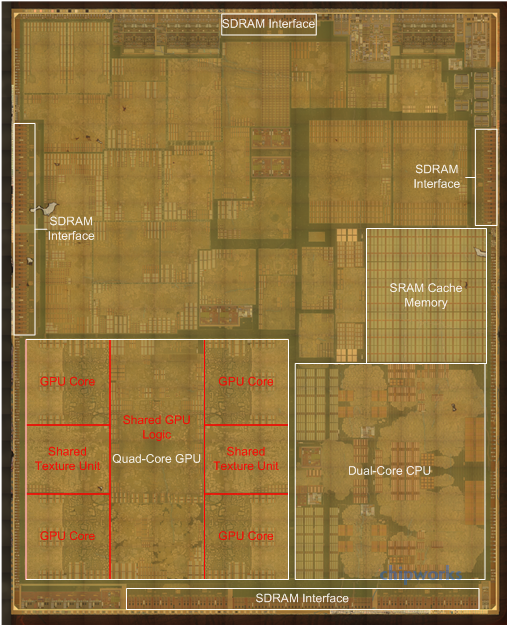 We could not find any relevant data for MediaTek's high-end SoCs such as the MT6795 2.2 GHz octa-core based on ARM Cortex-A53 and 700 MHz PowerVR G6200 graphics.

Nvidia's Tegra K1 in both 32- and 64-bit variation pushes 364.79 GFLOPS. Have in mind that Nvidia ships Tegra K1 32-bit and 64-bit right now and that Snapdragon 810 is coming later next year. Our sources claim that soon-to-come in 2015 Erista is going to set the new performance standards for mobile graphics. We don’t doubt that it will be significantly faster than Tegra K1 (Kepler) as Maxwell the graphics core used in Erista SoC is much more power efficient than Kepler.

This is a specification war rather than an actual measurement based on real-life performance, but since GFLOPS is industry standard, it tells part of story and it's used in marketing. We wonder how Samsung's upcoming GPU fits into this crowded market, and as we don’t expect Samsung to win the performance crown with its first design. The company should be able to compete to entry level or mainstream. Only time will tell.