Layout:
ASUS P5NT WS is of course an "all-solid" design, which was expected at an €200,- price target. Instead of using the 430MCP, ASUS decided to use the older nForce 570i SLI chipset. The only benefit compared to similar boards is SLI in x16 mode for both cards. Of course the 570i SLI is more power-hungry.

The power-voltage-regulator is a 8-phase analogue part, we would have wished for an digital VRM. The power-connector is positioned under the memory slots. The 8-pin CPU-power connector is well placed on the outer edge next to the cpu socket. The CPU area is clear, mounting big coolers is easy.

The colour-scheme is quite pleasing, black PCB on the front, dark-blue PCB on the back. Dual Channel memory is easy identified with the yellow and black memory slots. 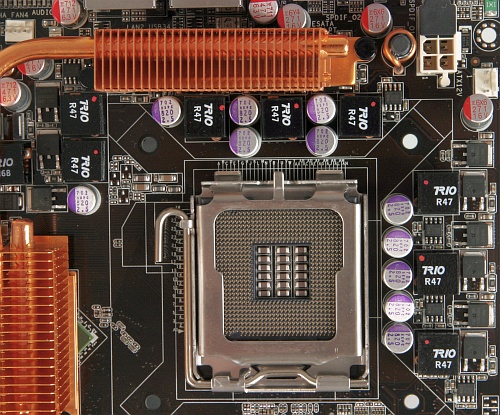 nForce 570i SLI supports six SATA II ports and one IDE. An extra SATA port is provided by the Silicon Image controller, but for eSATA only. Four of the SATA ports and the IDE port are angeled 90°, this should help with the cable mess.