AMD has 7nm Navi GPU up and running in its lab 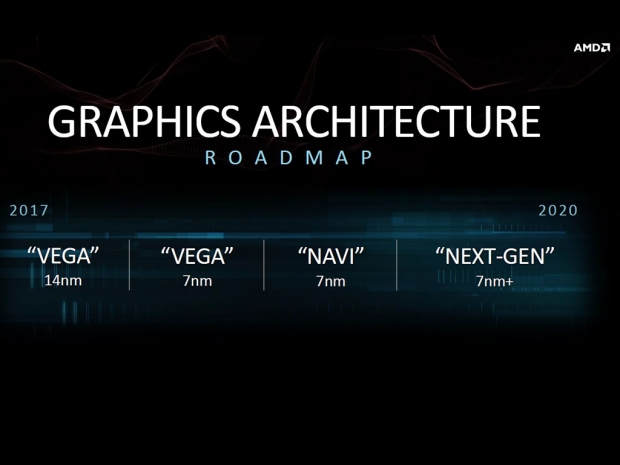 According to our sources, AMD already has its 7nm Navi-based graphics card up and running in its lab, and the 7nm GPU looks good.

While it is clear that the Navi-based graphics card will launch in the second half of 2019, with the best scenario rumored to be the third quarter 2019, the good news is that the GPU is up and running in AMD labs. Of course, this is probably one of the early versions as AMD has still a long way before it has a final product ready, as there is a lot of work involved into bringing a new generation of graphics cards to the market.

Our sources also suggested that the 7nm GPU looks better than expected. Unfortunately, our source did not go into specifics so we do not know if this means that yields are good or that the actual 7nm GPU is giving a performance/power consumption. Bear in mind that these are some of the first details coming regarding the 7nm Navi GPU, in addition to earlier rumors suggesting that we could see the GTX 1080 performance-level at $250 price range.

Earlier information, which comes from a PCGamesn interview with the Senior Vice President of Engineering at AMD Radeon Technologies Group, David Wang, also suggested that AMD won't be using an MCM (Multi-Chip Module) approach, but rather a standard monolithic die design.

Our sources are still adamant about the fact that the Navi GPU will target the mid-range graphics card market, so think of it as a successor to the Polaris GPU, rather than the Vega one. This could also mean that we won't see a high-end Navi GPU before early 2020.

AMD's 7nm Navi is expected to be succeeded by 7nm+ next-gen architecture, recently rumored to be called Arcturus, but that comes in 2020 and after.

Hopefully, more information regarding AMD's 7nm Navi GPU will show up as while AMD's Zen CPU architecture has certainly put a lot of pressure on Intel, lack of the competition in the high-end GPU market and the cryptocurrency craze have both led to higher graphics card prices.

Last modified on 19 October 2018
Rate this item
(1 Vote)
Tagged under
More in this category: « Asus ROG Strix coming back with Radeon RX 590 Samsung working on foldable laptop displays »
back to top