The Geforce GTX 780 is the currently fastest single GPU graphics card from Nvidia, if we don’t take the Geforce Titan into account, but the Titan officially is not part of the GTX 700 series and its price proves it.

On the other side AMD does not have an appropriate answer to the GTX 780, at least not yet, but we could see one in a matter of hours. AMD’s new top tier card is just around corner and once it hits the shelves it will not only fight against the reference Nvidia GTX 780 design, but also against many other great non-reference cards including Gainward’s GTX 780 Phantom which we’ll be reviewing today.

The Gainward GTX 780 Phantom Goes Like Hell (GLH) is based on a slightly altered GTX 780 PCB design and it comes paired up with a custom cooling solution. Of course we are talking about the Phantom cooler which is definitely a looker with great performance. New Phantom cooler has slightly a changed design compared to the previous generation used on GTX 680 cards. The most visible difference is that the fans can be easily removed much like hard drives from a hot swap bay. We’ll take a closer look at the cooler a bit later on. 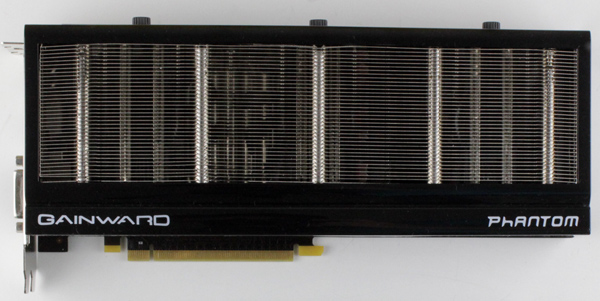 The Geforce GTX 780 is a pretty impressive card even in its plain vanilla reference edition. The next picture shows Gainward GTX 780 which is just loosely based on the reference design.

Specification wise the GTX 780 ended up with 50% more CUDA cores than its predecessor, the GTX 680, and this among some other things gives the GTX 780 card a significant performance boost, although the GK110 is based on the Kepler architecture of GTX 680 fame. The GK104 chip used in the GTX 680 has “just” 1536 CUDA cores. There’s more memory bandwidth, too. The GTX 780 has a 384-bus while the GTX 680 is limited to a 256-bit interface. The frame buffer was upped from 2048MB to 3072MB GDDR5 memory. The memory speed on both cards is 6008MHz. Note that the Gainward GTX 780 Phantom GLH comes with factory overclock which raises the memory clock by 50MHz (effectively 200MHz GDDR5).

Memory overclocking is vital in any attempt to squeeze out more performance from a graphics card, so we are happy to see that Gainward upped the GPU clock by 200MHz at a time when many Nvidia and AMD AIBs are choosing to overclock the GPU exclusively, leaving the memory on reference clocks.