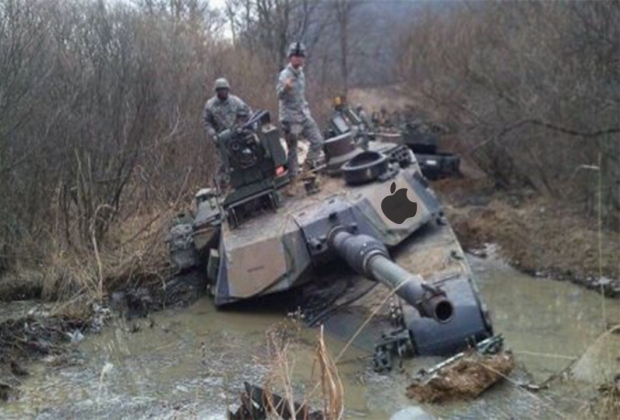 Fears of iPhone and China dependence

Wall Street’s love affair with the fruity cargo cult is definitely slipping as the cocaine nose jobs wake up to the fact that the company is unlikely to hold its historically high earnings.

Shares of Apple have fallen to their lowest since August on Monday following recent fears that no one is buying the newish iPhone and indications that Chinese sales were also going to slump.

After its iWatch failed to take off, Jobs’ Mob has been out of ideas and with no new products in the offing has been forced to lean on China sales and the iPhone to keep its record sales figures. With the bottom cut out of these, Apple is looking vulnerable.

At one point Apple was down 3 percent and weighed more than any other stock on US. The Tame Apple Press is doing its best to claim that there is nothing to worry about. Reuters pointed out that Apple’s rival Samsung is also predicting a pants 2016. However Samsung has other products to fall back on, where as Apple is dependent on just one.

Jobs’ Mob is expected to try and resolve its woes in the short term by issuing the new iPhone early. It already inflated the sales for its iPhone 6S by starting sales in China at the same time as the US rather than delaying them until the next quarter.

However it can only do that so much and Wall Street is clearly wise to it. Shares of Apple are down about 23 percent from April. The belief is that things will be tight next year and fewer will replace their smartphones.

Everyone knows now that Wall Street’s iPhone 6S estimates were too high and a third of analysts tracked by Thomson Reuters have trimmed their estimates for Apple.

For fiscal 2016, Apple is now expected, on average, to grow revenue by under 4 percent, a far cry from the 28 percent revenue expansion it achieved in the fiscal year that ended last September.