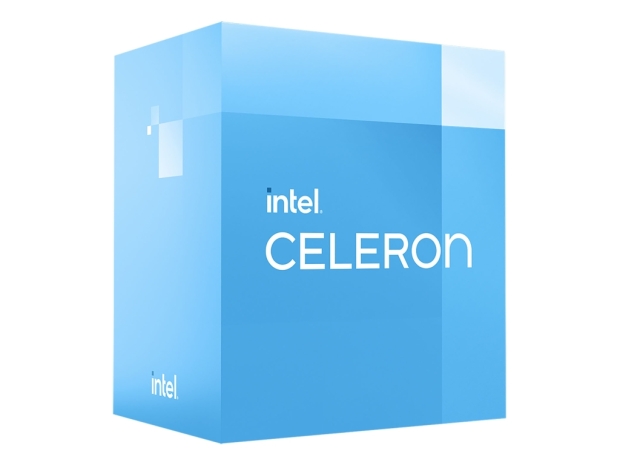 Golden Cove cores do not cut the mustard

When the chip came out everyone was enthusiastically claiming that the new Celeron G6900 from Intel's 12th Generation Alder Lake family matched the Core i9-10900K (Comet Lake) in single-threaded performance.

In addition, the Geekbench benchmark results highlighted the punch of the new Golden Cove cores. However, when it came to gaming it starts to look a bit weak.

For those not in the know, the Intel Celeron G6900's specifications, has two Golden Cove cores and no Hyper-Threading. It runs at 3.4 GHz, with 4MB Smart Cache and 2.5 MB of L2 cache. The processor supports up to DDR4-3200 or DDR5-4800. Intel's UHD Graphics 710 iGPU has up to a 1.3 GHz boost and 16 EUs. This Celeron has a 46W TDP. To be fair you can pick one up for £55 so you should not expect too much, but Steve at Random Gaming in HD (RGIHD) had some rather bad experiences.

He didn’t say anything about the storage, but the GPU in the system for game testing was the Nvidia T1000, a creator-focused card with similar specifications to the GTX 1650. In a previous video, RGIHD said he picked up this T1000 as it had better availability/pricing than the gamer/consumer focused GTX 1650.

The Witcher 3 at 1080p high with an average of 43 FPS, marred by lengthy intermittent freezes, which couldn’t accurately qualify as stutters – these pauses were far too long (One per cent low 0 FPS).

In GTA San Andreas at 1080p high, the system achieved an average of 58 FPS, and the glitches and slowdowns were much more bearable (One per cent low 15 FPS).

For Cyberpunk 2077 playing at 1080p low in the Badlands, there was an average of 47 FPS one per cent low of 11 FPS). However, this game has a bigger problem, as it will not load save games when this lowly 2C/2T processor is your CPU. It is hard to complain about this “bug” as the Celeron is two cores short of the minimum specced CPU.

The YouTuber ran CS:GO at 1080p low settings on the Dust II map. The average in-game performance was 120 FPS (a per cent low 42 FPS), so performance was better. Fortnite, Forza Horizon 5 (hangs at loading screen), GTA 5, Far Cry 6 (so slow it is unplayable), and Red Dead Redemption 2 ran at an average 34 FPS using 1080p “console settings.”

The Celeron held this system back in gaming. If you flick through the video, you will often see CPU flat out at 100 per cent while the GPU was having a nap.

Steve said there wasn't much point in going for this latest-gen Celeron over any previous-gen entry-level Intel processor that is still available due to the higher motherboard costs at this time.