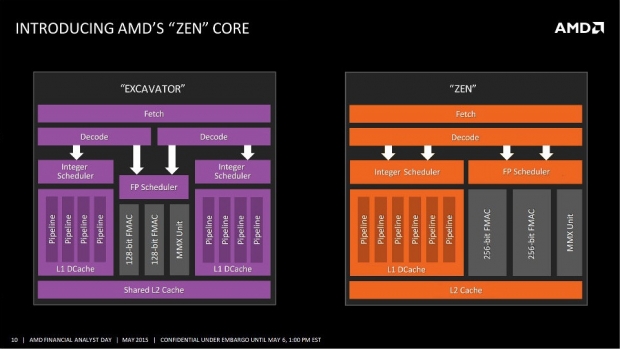 The block diagram of the new AMD Zen core has found its way onto the Planet 3 news group.

If the leak is accurate it compares the Zen, on the right, with AMD's upcoming and last Clustered Multithreading / CMT CPU core code named Excavator.
Excavator is the last of AMD's Bulldozer family of cores and it will appear with AMD's Carrizo APU, which AMD claims will be the most power efficient mainstream APU.

Zen takes a more traditional AMD CPU layout similar to Phenom. There appears to be one integer cluster in a Zen core while there are two as in the Excavator. Bulldozer had a high integer throughput at the expense of floating point performance.

In Zen AMD uses a single fetch and single decode unit on the front end which is also a step back from Steamroller's double decoders that were introduced with.

It appears then that Zen will have a higher single threaded integer and floating point performance compared to Excavator and Bulldozer.

AMD has introduced a floating point that's twice as wide as that of Excavator. Featuring two FMAC 256-bit units. These will probably fuse and process 512-bit AVX floating point instructions. In Bulldozer this is carried out by two 128-bit FMAC units. They can process one 128-bit SIMD instruction each per clock or fuse to process a single 256-bit AVX instruction per cycle. So it looks like Zen's FPU will go the same way and allow both FMACs to cooperate and process 512bit AVX instructions.

Zen enables 512bit AVX support, and with the wider floating point unit can process less complex instructions at double the rate of Excavator. Historically AMD did well with floating point performance until Bulldozer so this will be a return to form.
Zen features a 50 per cent wider integer pipeline vs a single Excavator core. Which will also dramatically improve the single threaded / per core performance of Zen.

Coupled with a more advanced 14nm process from Samsung/Globalfoundries the net result should be a significantly faster, leaner, smaller and more power efficient CPU core than Excavator.

We are expecting to see the products in the shops next year with more official information coming out in a couple of weeks.