Products coming by the end of the year


Although Intel's Larrabee project was scraped, or shelved to be precise, it appears that Intel has at least used some of the experience gained in Larabee development. The compny finally announced Knights Corner, a Many Integrated Core (MIC) multi-core computer architecture co-processor, that will be a part of Intel new Xeon Phi line.

According to first details released by Intel, the general specifications of the Knights Corner are a single PCI-Express card that will feature over 50 x86 cores made with 3D Tri-gate 22nm manufacturing process and at least 8GB of on-board GDDR5 memory. Knights Corner will provide 1TFLOP of double precision performance. Unfortunately, those are the only details that Intel is ready to share for now, but we guess that we will surely hear more about Xeon Phi.

Although it borrows some desing details from the Larrabee project, Knights Corner is solely focusing on High Performance Computing rather than graphical performance. The Knights Corner has a tough battle ahead of it considering Nvidia's recently announced Tesla K20 graphics card capable of providing up to 2TFLOPS of computing double-precision performance, but Intel's x86 architecture, independent Linux operating system that manages each of those cores, provide much atractive platform for develepers than Nvidia CUDA.

Actually, Cray has already announced its Cascade supercomputer that, although currently runs on Xeon E5, will get updated with Xeon Phi as soon as possible.

Although it has revealed some details regarding the MIC architecture and Knights Corner co-processor, Intel actually just launched the Xeon Phi brand, while Knights Corner should be ready by the end of the year. 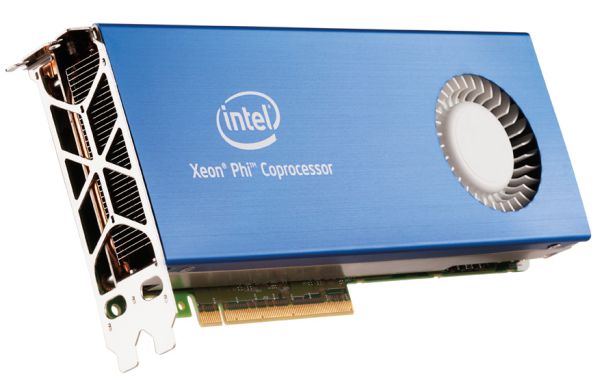