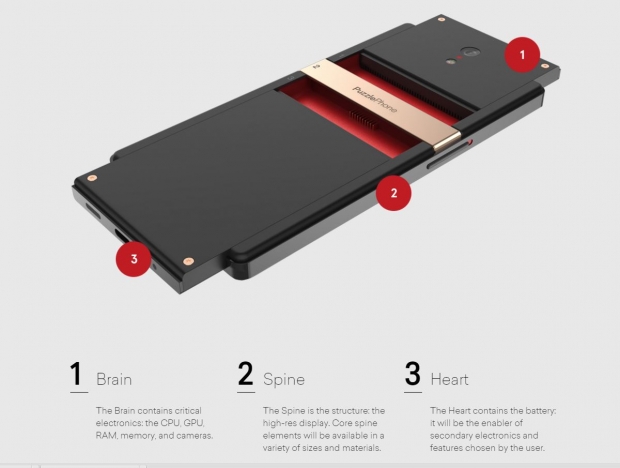 If either project does not fall to bits

There is a new entrant in the modular smartphones game – PuzzlePhone.

For those who came in late, modular smartphones are potentially a new thing for smartphones. Rather than buy a new one every year, you just buy the bits you want. Project Ara was among the most likely to have legs but now there is a new player vying for crowd-funding cash.

PuzzlePhone wants $333 and you'll get a complete Android phone divided into three bits. There is a Spine (the 5-inch LCD, frame and speakers), Brain (processor and camera) and Heart (battery etc), all of which you can replace without having to toss out the rest.

All of the models have an unnamed eight-core processor, 3GB of RAM, a 5-inch 1080p display, a 12-megapixel rear camera and a 5-megapixel front camera.

How much you pledge determines the internal storage and what it looks like. It looks like $333 gets you a 16GB device with black plastic bits. If you want metal and 32GB you will have to pay $444 32GB . There is a limited-run $777 model with 64GB and a copper look.

PuzzlePhone isn't expected to ship until September 2016 at the earliest. While that is a long time to wait, at least you will know when it is coming – unlike Project Ara. Ara does not have a price yet.