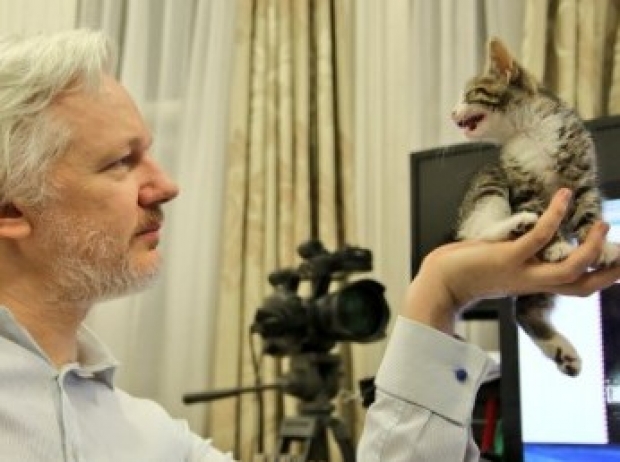 Hacked, pooed, could not clean up after himself  and starved his cat

Ecuador's foreign minister Jose Valencia has been moaning about Julian Assange's conduct during his stay in Ecuador's embassy.

Assange "damaged the facilities by riding his skateboard and playing football, despite being told not to do so". Cleaning staff, Mr Valencia said, had described "improper hygienic conduct" throughout Assange's stay, an issue that a lawyer had attributed to "stomach problems".

One unnamed senior Ecuadorean official told AP news agency that other issues included "weeks without a shower" and a "dental problem born of poor hygiene".

Interior Minister Maria Paula Romo then complained that Assange had been allowed to do things like "put faeces on the walls of the embassy and other behaviours of that nature".

Ecuador President Lenin Moreno said: "Assange treated his hosts disrespectfully; late last year the embassy implemented a series of rules for Assange, including a requirement to be responsible for the "well-being, food, hygiene and proper care of your pet."

If Assange didn't, the embassy threatened to put the cat in a shelter. In other words, it is likely that Assange didn't adequately clean up after his cat's wiki-leaks.

The New Yorker reported in 2017 that Assange's interest in the cat was less as an animal lover and more as a master of his brand. "Julian stared at the cat for about half an hour, trying to figure out how it could be useful, and then came up with this: Yeah, let's say it's from my children", the magazine quoted one of Assange's friends as saying. "For a time, he said it didn't have a name because there was a competition in Ecuador, with schoolchildren, on what to name him. Everything is P.R. -- everything."

Journalist James Ball, an early WikiLeaks employee - who left after three months - said on Twitter that he'd "genuinely offered to adopt" the cat -- but it was "reportedly given to a shelter by the Ecuadorian embassy ages ago".

Assange's legal team, however, tweeted in November that Assange had been outraged by embassy threats to send the cat to the pound, and asked his lawyers "to take his cat to safety. The cat is with Assange's family. They will be reunited in freedom."

Last week, the government of president Lenin Moreno accused WikiLeaks of being involved in a hacking campaign implicating him and his family in corruption.

Moreno, who has long expressed his unhappiness over Assange's asylum status, complained that "photos of my bedroom, what I eat and how my wife and daughters and friends dance" had been circulating on social media.