After testing the latest Phenom II X6 CPUs, it's time to check the new underlying chipset, in this case with integrated graphics-core called Radeon 4290.

This is an upgraded 785G still with DX10.1 support, which by now isn't a big deal, and with the UVD2 stream engine. This will allow the 890GX to stream Blu-ray content with picture in picture functionality. They upped the the clock from 500MHz to 700MHz while AMD tweaked the chip to be more energy-efficient. The most important new chip is the Southbridge called SB850. This is the first chipset that includes 6Gbps functionallity, which will come handy when using SSDs. For this review we have skipped this test, but we will test this shortly. Let's take a look at the diagram AMD sent us: 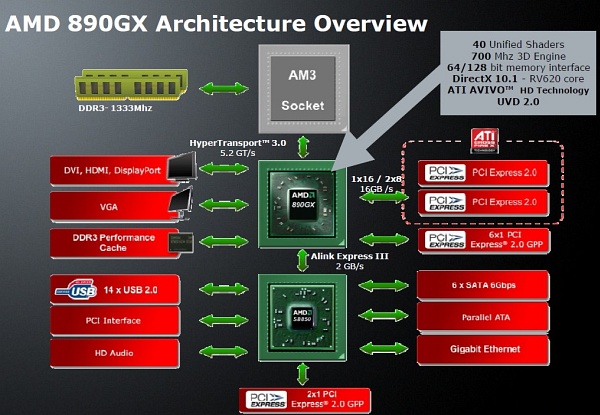 As you can see, it's still pretty straight forward. The 890GX is capable of providing 22 PCIe 2.0 lanes, which results in one x16 and six x1 lanes. The PCIe x16 can be split to two x8 to use two ATI Radeon graphics-cards in Crossfire mode. While the picture states the SB850 has a PATA controller, it's worth noting that board manufacturers use an add-on chip to provide such functionality. We do not really care if such a port is present, because nowadays anything is SATA and optical drives are cheap as chips. The link between IGP and Southbride has been doubled, so 2GB/s is healthy for possible RAID 0 SATA 6Gbps.

OS:
All tests are performed with XP SP3. As 64-bit software is still not very common, we used the 32-bit version.
Prev Next »
Last modified on 08 September 2010
Rate this item
(0 votes)
Tagged under
More in this category: « Cooler Master HAF 912 and HAF 912 Plus previewed Point of View / TGT GTX 480 Beast reviewed »
back to top