We tried the HR-02 on a few motherboards and in two different computer cases. Most of our testing was performed in Corsair Obsidian 800D case with the rest in CoolerMaster's HAF-X. Both cases were strapped with default fans at maximum RPM and our room temperature was at 22°C. We pushed all the available cores to 100% using Prime 95 (Small FFT) so bear in mind that these results are the worst case scenarios that are very unlikely to occur in practice. In our gaming tests, temperatures on both coolers were about 15°C lower.

We compared the HR-02 with Prolimatech’s Armageddon. Thermalright HR-02 hasn’t managed to beat Armageddon with high margin when we strapped both coolers with fans, but semi-passive mode worked out in HR-02’s favor. The following tests have been performed on EVGA’s X58 FTW3 motherboard in Obsidian 800D case, where Armageddon couldn’t stop our Core i7 930 from going over 100°C. We measured and recorded average temperatures from all the CPU cores. 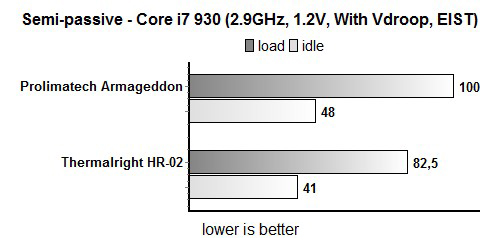 We managed to score significantly lower temperatures on the CPU cores by strapping our coolers with Thermalright's TR-TY-140mm fan, as you can see for yourself from the table below. 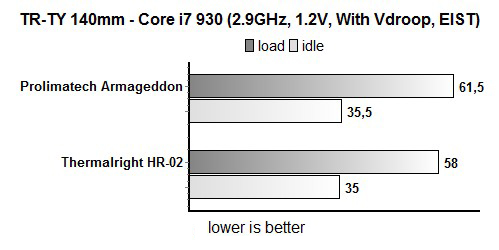 We then overclocked the CPU to 3.6GHz, leaving the fans on the coolers. Overclocking resulted in temperatures over 70°C and Armageddon kept pace with the HR-02, except of course in semi-passive mode.

In our previous tests, we kept the TR-TY 140mm (900-1300RPM) fan running at maximum RPM, but we performed the test with lower RPMs as well. We lowered the aforementioned fan’s RPM from 1300 to inaudible 900RPM, but it barely affected cooling performance. It’s worth noting that TR-TY 140mm fan is capable of 28.3-74CFM airflow. 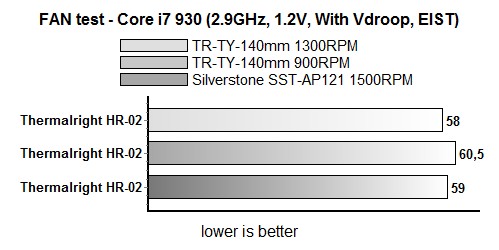 We used Gelid’s GC-Extreme thermal paste in our tests, but we couldn’t resist the urge to try the Chill Factor3 paste, which comes with the HR-02. The results are pretty good, almost as good with Gelid’s. 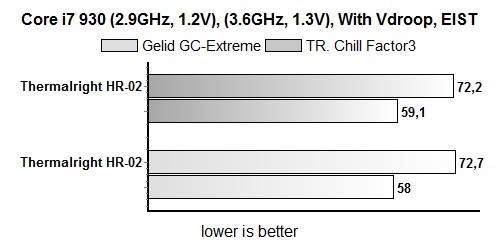 We performed additional HR-02 cooling performance tests in CoolerMaster’s HAF-X, which has more fans than Obsidian 800D. We used EVGA’s 4-Way SLI Classified motherboard, but since the large cooler on the mobo’s chipset got in the way of our cooler, we had to turn the HR-02 towards the case’s top panel fan. We tested it in semi-passive operation on Core i7 Extreme 965, and it’s evident that the top panel fan will dictate much of the HR-02’s performance. In fact, temperatures jumped by more than 20°C when we turned it off. 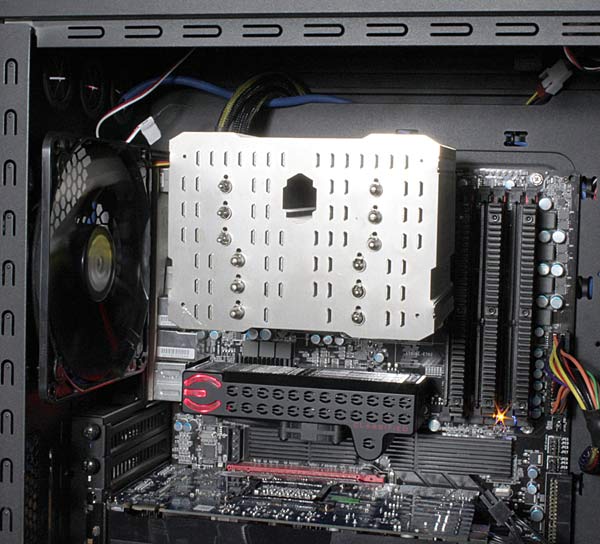 We also thought it would be interesting to see how Thermalright’s  HR-02 performs with older CPUs. We used Intel’s socket 775 motherboard with Core 2 Extreme X6800 processor clocked at 2.9GHz (TDP 75W) and  a passively cooled Gigabyte 9800GT. The test system was in CoolerMaster’s HAF X case with 4 fans. Room temperature was at 23-24°C. In order to push our CPU and graphics to the max we used Prime 95 like in the tests before. This time however, we added a bit of graphics torture with FurMark. The in-case fans ran at max RPM but HAF X didn’t mind and didn’t even run that loud. Compared to the two-year old and much cheaper passive Hyper Z600 cooler, Thermalright HR-02 was much more efficient. 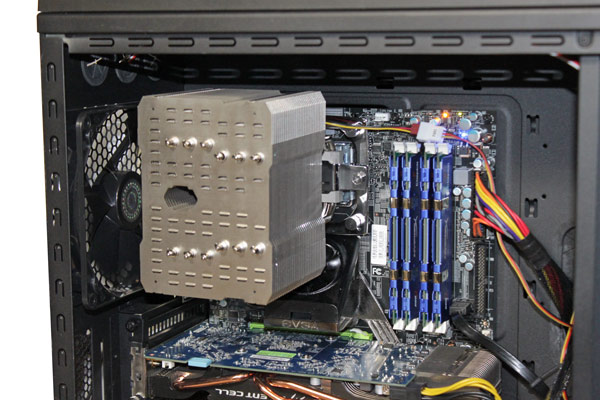 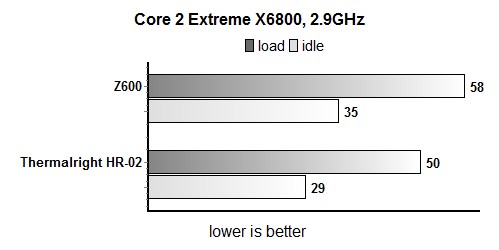