Thin is in when it comes to women and notebooks, but in spite of the latest craze with thin and light notebooks, which is reminiscent of last year's netbook hype, there's still a market for desktop replacement notebooks. You still remember those things don't you? Powerful, well equipped, capable with dealing with most tasks an average non-gamer needs and big enough to kill in a single blow. 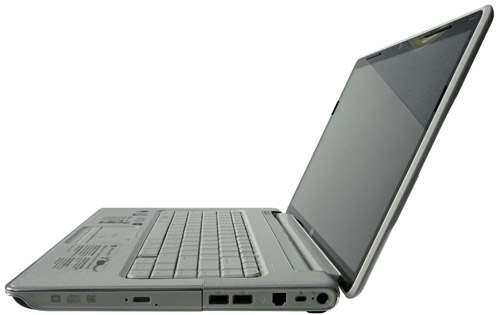 Over the years, HP's Pavilion series has offered quite a few interesting and well priced machines, and the DV5 is no exception. Like most Pavilions, it's available in a bunch of various configurations, with prices ranging from as little as €450 to over €900. 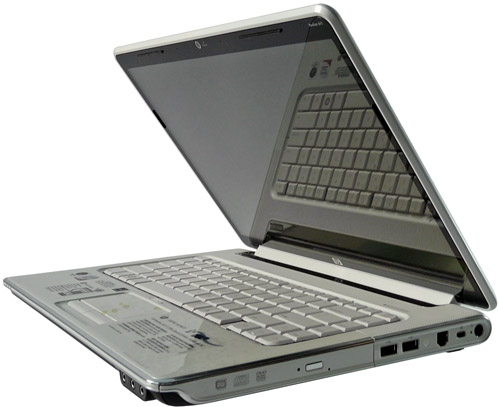 We got ourselves a special edition model, in pearl white, but under the bonnet it's a low end SKU, based on Intel's venerable T5800, with 3GB of DDR2 and 320GB of storage. We like the looks, as the white version is a tad more interesting than the usual diet of silver and chrome. However, HP's DV series sports quite a bit of chrome and gloss in any package, from 12 to 17 inches, and some find it too tacky, and flashy, much like a white Cadillac driven by a bloke with a couple of gold teeth. 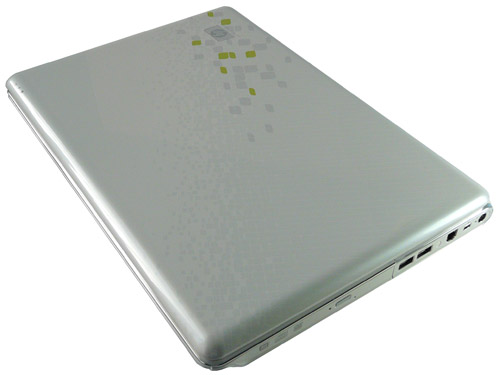 In recent months, we've been spoiled by thin and light notebooks, and the DV5 might seem a bit chubby. Measuring 41.9 x 259 x 357mm, it's by no means small, but it's not too bad either. It weighs just short of 2.7kg, and both in terms of weight and dimensions, it's what we've grown to expect from this particular product class.

There's a thin line between chic and kitsch, and the DV5 is doing a tight rope balancing act on that line. All DV-series notebooks feature the same basic design features, i.e. loads of glossy plastic and chrome. Some love it, some hate it, and frankly, I can't make up my mind, either. Well, at least we can all agree it's a bit different than most 15-inchers, especially in the white finish.

The upshot of using white plastic instead of glossy black is increased resistance to smudging and fingerprints. Bear in mind, the finish is still glossy, and it will pick up quite a bit of dirt, it just won't show as much. The lid, with two overlapping textures in green and grey is a nice touch, if you don't think the green bits are a bit over the top. The lid itself feels very sturdy, it doesn't flex much, and the hinges are great, not that we would expect anything less from an HP, and a rather heavy one.

The HP logo is backlit, bathed in a gentle white light. It looks a bit better than on the black version, as there's less contrast and the effect is more subtle. 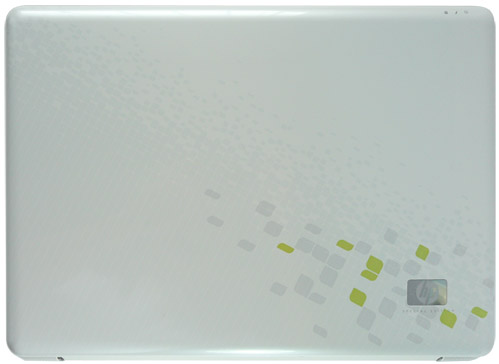 Everything feels pretty solid, and although HP used quite a bit of plastic, it doesn't creak when put under pressure. The only thing that worries us, in the long run, is durability.  The chrome trim on the edges is exposed, and if you're not careful you'll scratch it in no time. This is not an ultraportable machine, so this is not a major concern, as it will spend most of its life on a desk. 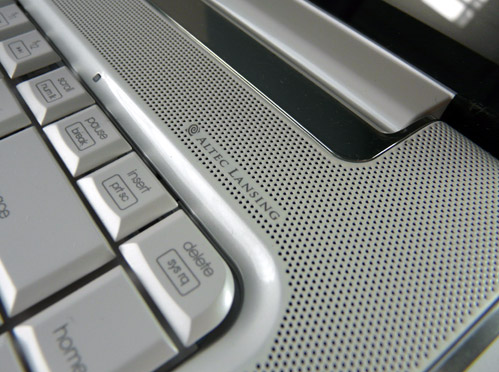 Once you power it up, the chromed strip under the screen lights up like the Las Vegas strip, and offers you all the multimedia controls you could ask for, as well as a Wi-Fi switch. 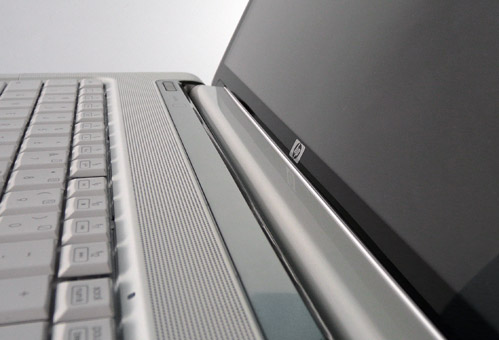 The DV5 is put together quite nicely, too. Nothing seems too flimsy, and you can feel the attention to detail. There's not much flex on the keyboard or wrist rests, and in spite of using a lot of plastic on the chassis, HP still ended up with a pretty robust machine.

The biggest trouble with the glossy finish is the fact that HP though it would be a good idea to use it on the touchpad. Well, it wasn't.