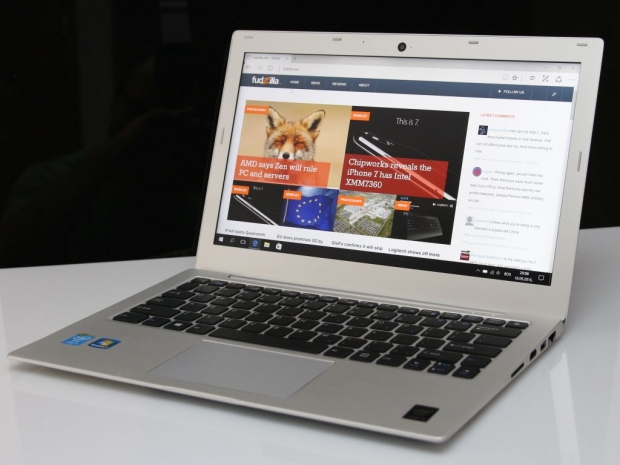 Taking a break from reviewing Intel Atom-based ultraportables and hybrids, we decided to try out something a bit different – the 13.3-inch Martian A8 notebook, based on a Core processor.

If you are tempted to Google the manufacturer’s website and check it out, don’t bother, because the website does not exist. This is a very small brand, and this particular product is just one of many “whitebox” notebooks showing up on the market. 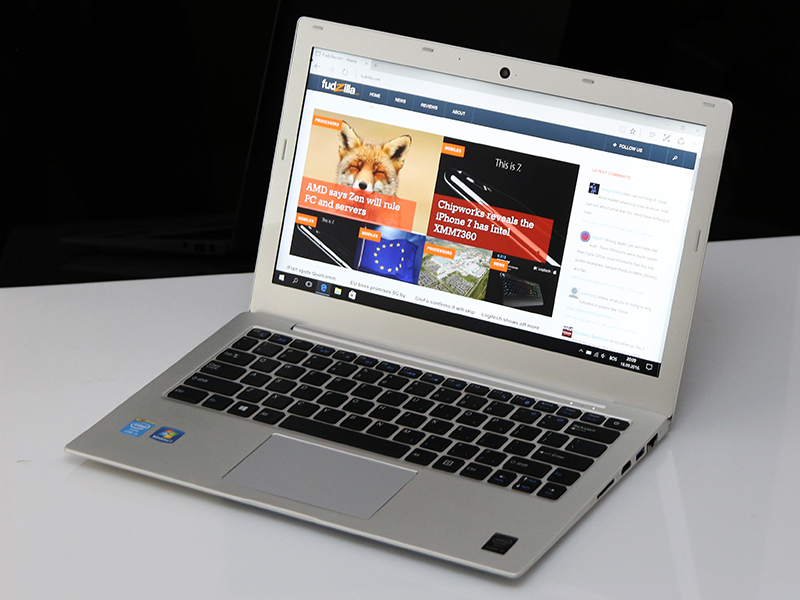 We’ve seen this trend before, especially with tablets and budget phones, but this year we are also seeing a flood of “whitebox” laptops, which probably has something to do with the fact that the tablet market is tanking, and that manufacturers need a new way of shifting their budget gear.

The Martian A8 notebook is available in a few different SKUs, with different Intel Core CPUs, ranging from i3 and i5 parts to Core i7 processors. Different RAM configurations are available as well. Our example is powered by the venerable Intel Core i3-4030U CPU, with 4GB DDR3 RAM and a 128GB SSD. We will get back to the spec later. 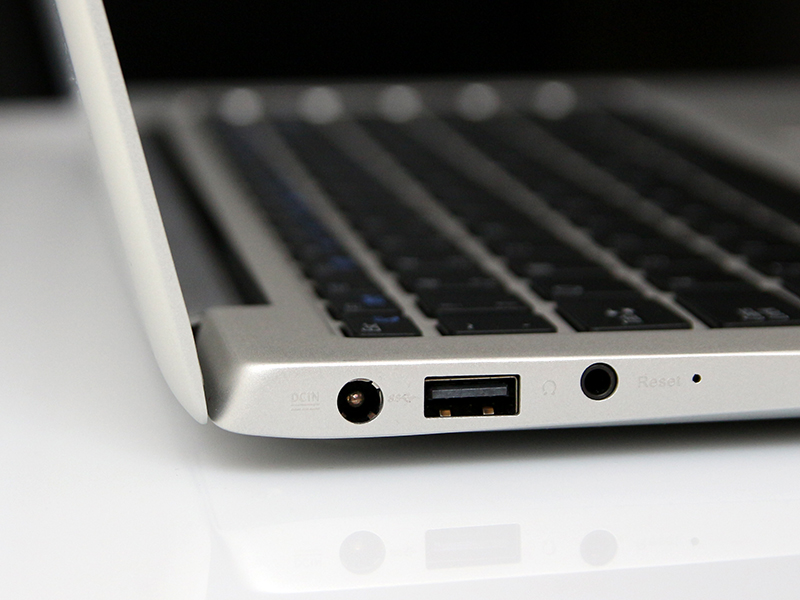 Taking a closer look at the Martian A8 from different angles gives you a reassuring feeling of a solid build and good choice of materials. The chassis is a combination of a nicely machined magnesium – aluminum alloy and plastic parts. It’s very sturdy. 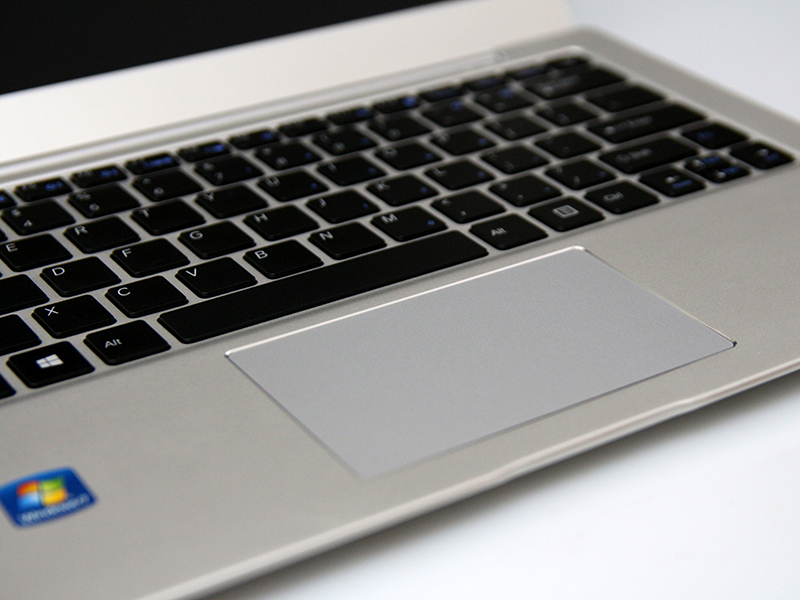 The keyboard and the spacious touchpad are built precisely and perform without a glitch. The oversized touchpad left a very good impression. 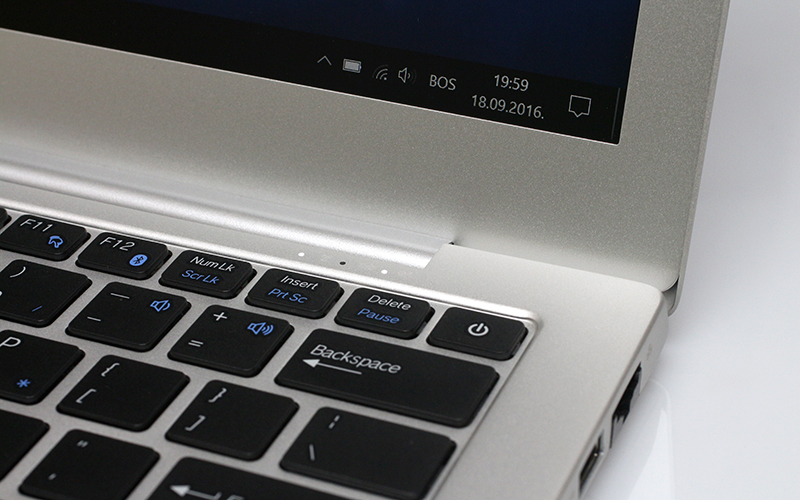 The far right corner of the keyboard holds the power button, another MacBook Air design element. Three small, unobtrusive status LEDs also reside in this corner. Notice the odd corner of the screen lid? We will come back to it a bit later.

As you’d expect from an Air clone, the front edge of the notebook is very thin and elegant, measuring 15mm in height without the rubber feet.

The back is, of course, port – free and cleanly designed, measuring 20mm without the rubber feet.

The left side houses the power connector, a USB 2.0 and a 3.5mm headphones port, and interestingly, a small reset button, much like the ones found on routers.

The right side of the notebook features the SD card reader, a standard HDMI port, a USB 3.0 port and a blast from the past - an RJ-45 LAN connector.

The thin screen lid (measuring 5mm) shows off the company logo, a flaming skull that sort of resembles the Alienware logo with a Bernie Sanders wig on top. The logo would have blended in much better if it was white or gray, rather than black. 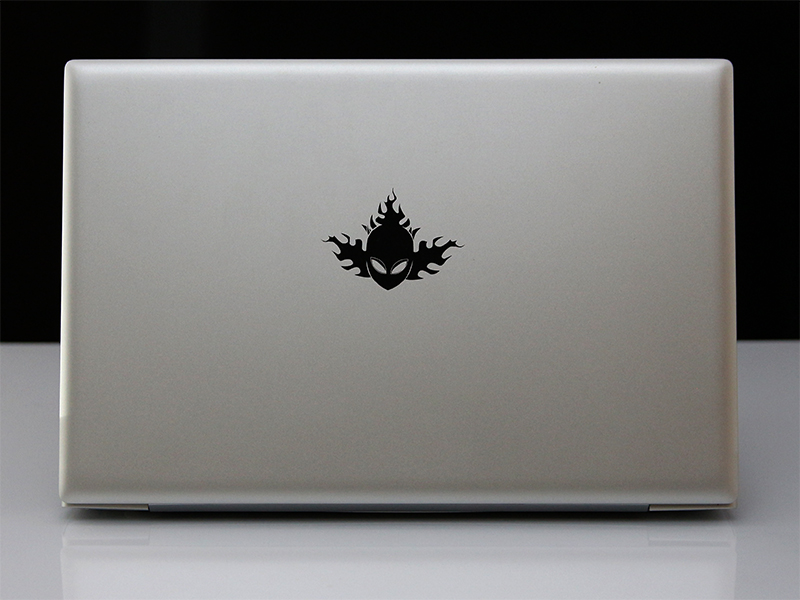 Unfortunately, the reassuring solid feeling we mentioned earlier disappears once you pick up and hold the notebook in your hands, or when you take a look at the bottom side of the case. 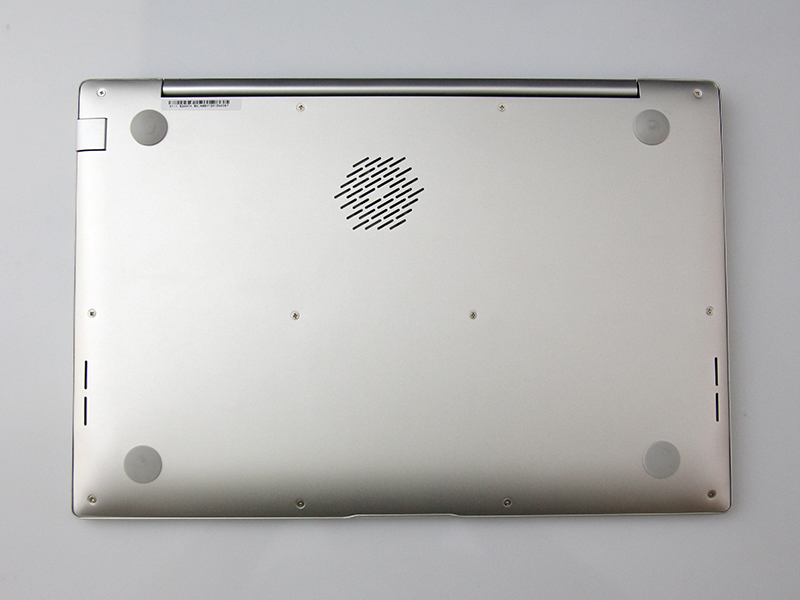 The cooler vents on the bottom of the case ruin the otherwise clean looks. If only they were designed like a horizontal grille, they would have looked much better and blended in with the minimalistic design.

The otherwise solid build quality is let down by the case edges, where the top and bottom halves of the chassis are joined. These edges are too sharp, and the same goes for the screen lid edges. 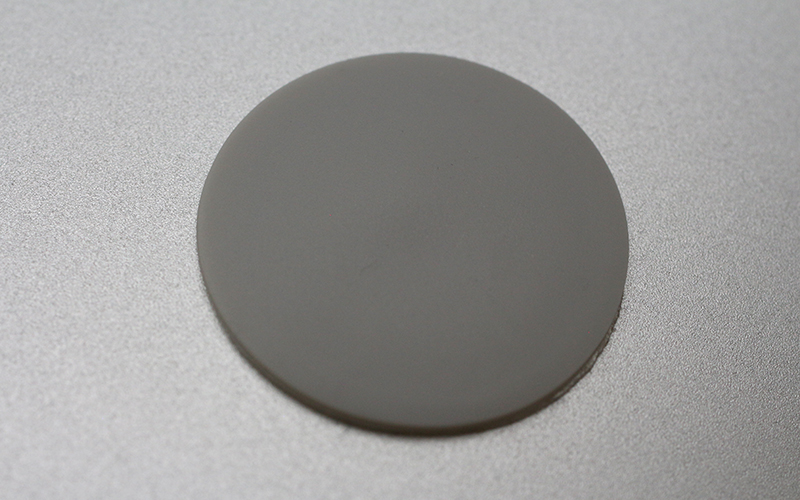 You can forget about the unappealing cooler vent, but every time you pick up the notebook those sharp edges will be there to greet you. 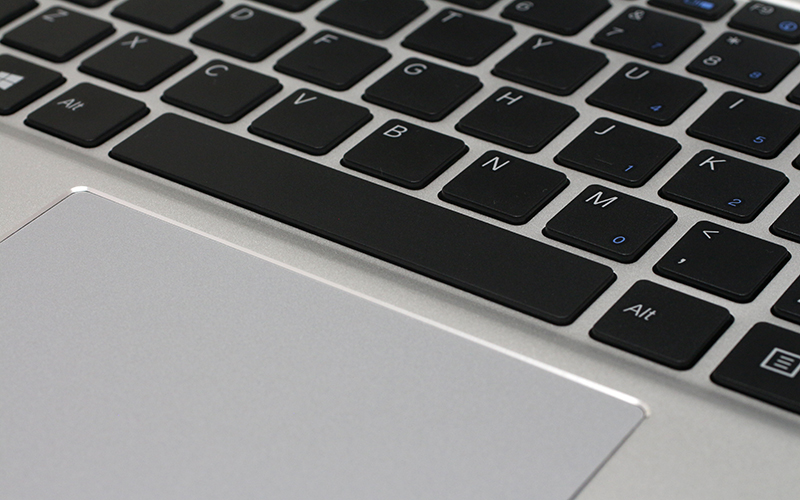 Besides its good looks, the keyboard functions surprisingly well. The keys feel good, key travel and feedback is good and the keyboard is comfortable. 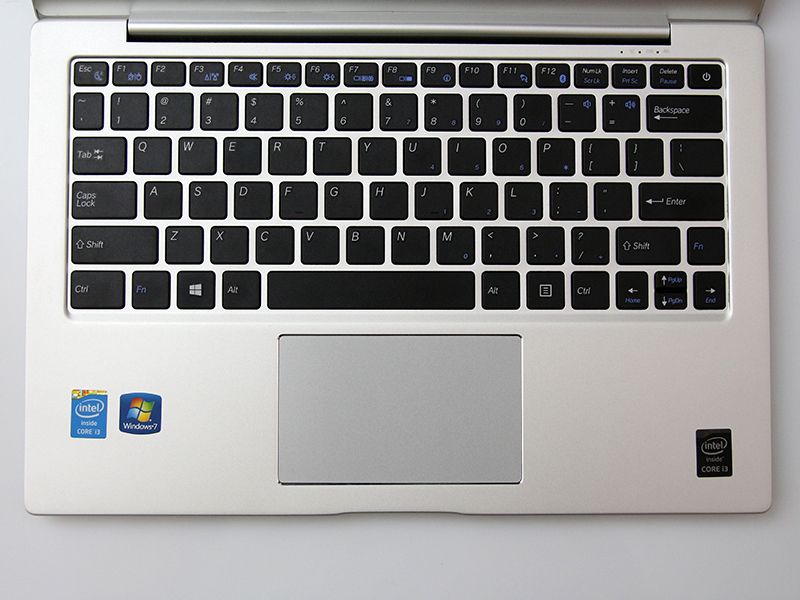 The keyboard layout is more or less standard for 13.3-inch devices, with the function keys a bit smaller than others.

Like we mentioned before, the touchpad is spacious and works quite well. We loved the precise machining of the touchpad bezel; it looks and feels great. 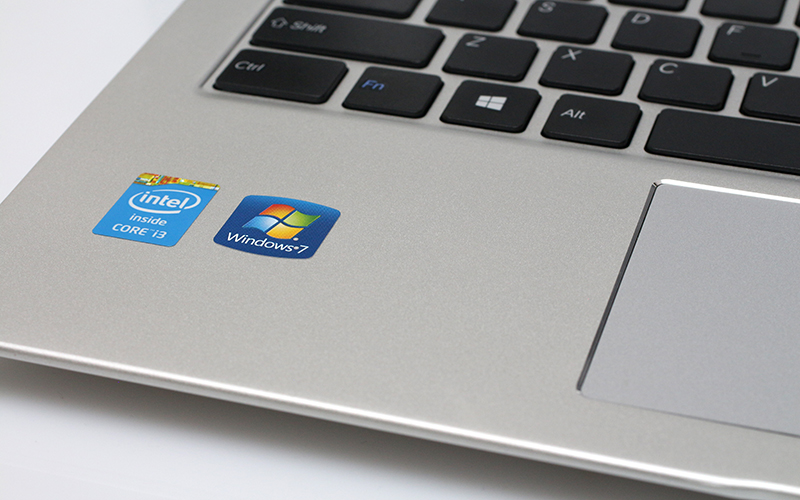 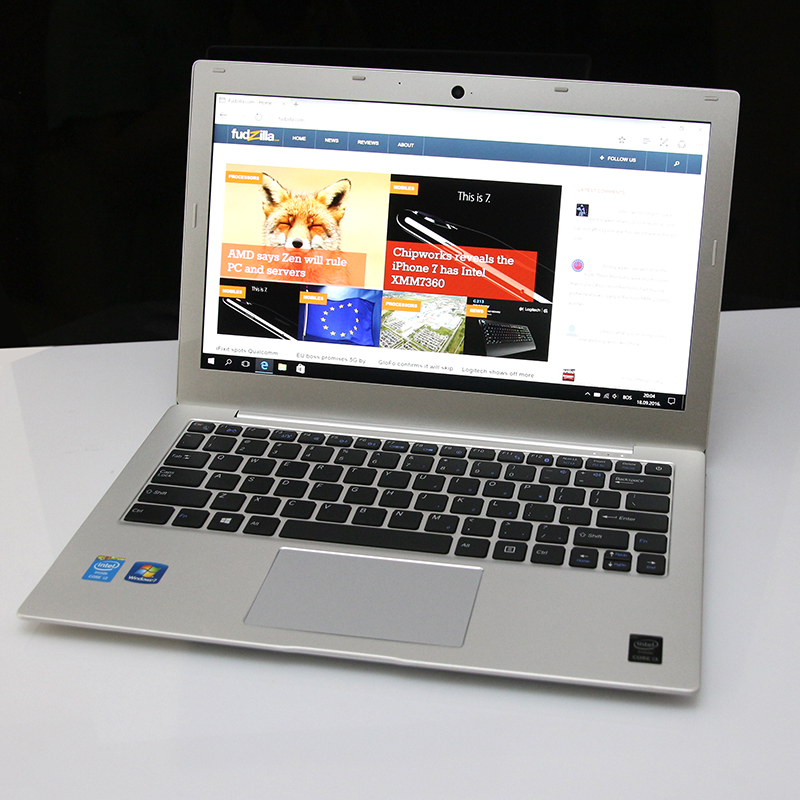 The 13.3-inch IPS Full HD display is definitely the highlight of the A8, thanks to its great image quality, uniform brightness and vivid colors. 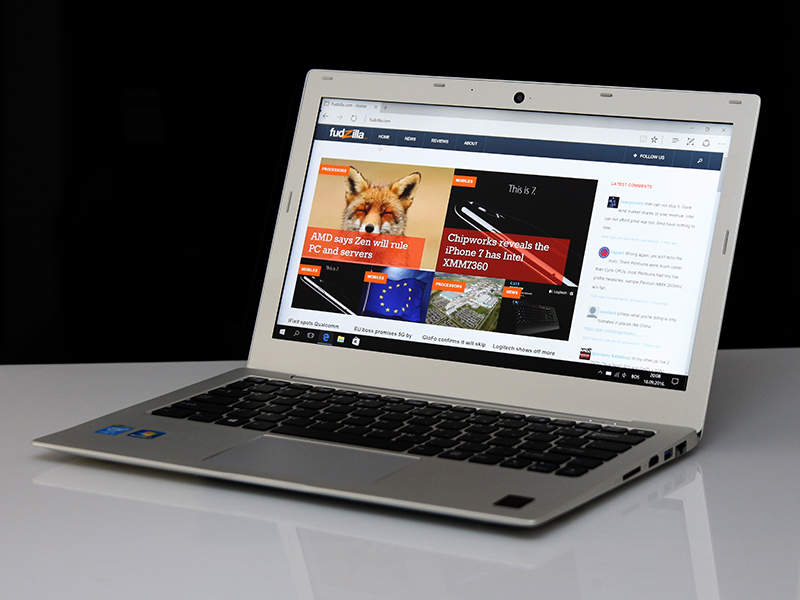 This is not a touchscreen, but there’s one more thing to love about the screen – it’s matte. Matte screens are all but gone from budget notebooks, although some vendors still cling to them in other market segments. It’s been a while since we played around with a matte display on this sort of device, and we have to say the experience is great.

The only obvious drawback is the fact that this is not a touch screen, but we would trade touch functionality for this matte non-touch screen anytime. No contest. 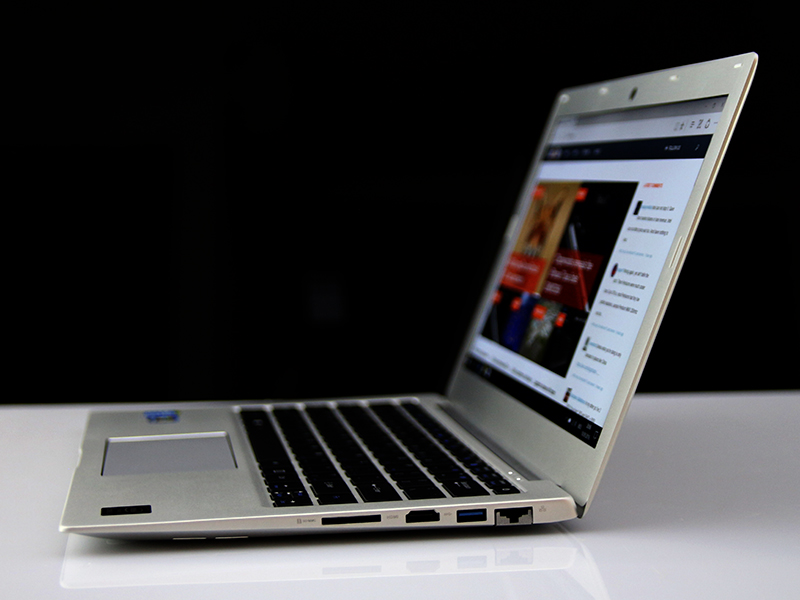 The viewing angles of the IPS display are simply great, and since it’s matte, image quality in well-lit environments or outdoors is better than you’d expect at this price point.


Ergonomics and everyday use

Do not get us wrong, we’re not fans of clones, but cloning a product like MacBook Air brings some nice features closer to budget users. Martian A8 users will clearly benefit from the well thought through ergonomics of the MacBook Air. 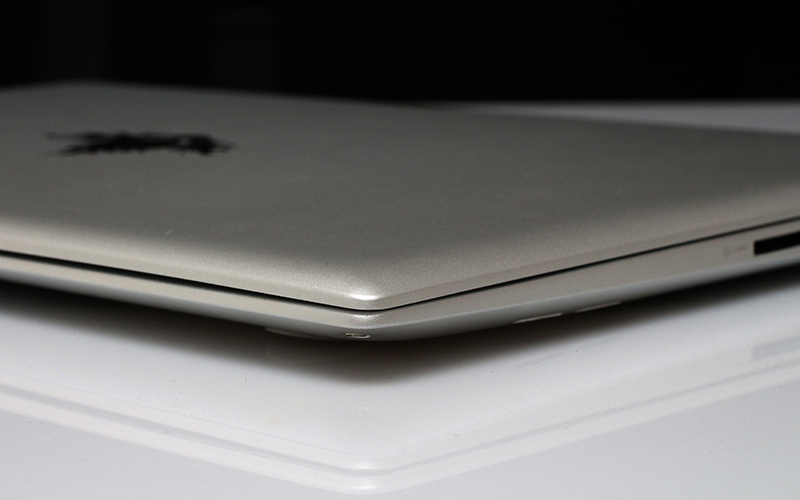 In everyday use, Martian A8 is a very comfortable notebook to live with. The responsive hardware platform makes everyday computing tasks a breeze, the display looks great under all lighting conditions you are likely to encounter, and everything works as advertised.

Thanks to the efficient Intel low-voltage processor, battery life is good, and we managed to get about five hours of video playing time. 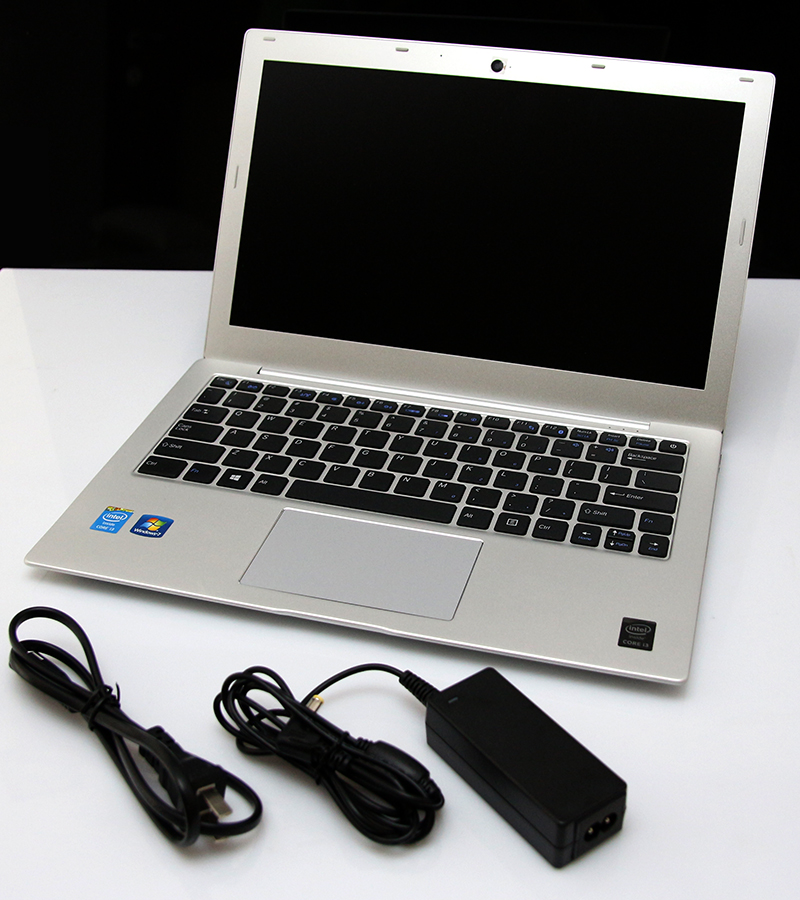 The Martian A8 notebook comes with the following hardware specifications:

The Martian A8 notebook ships without an operating system, so our first step was to install Windows 10. The installation completed without a glitch, and it gave as the first hint to the performance of this notebook – the Martian A8 flew through the installation process. Windows 10 recognized all of the hardware components and installed the necessary drivers automatically, so no problems there.

The Martian A8 is based on a Haswell i3-4030U 22nm CPU maxing out at 1.9GHz, introduced in Q2 2014. You could argue that this is an old chip, and that Martian should have used an i3-5xxx or i3-6xxx, but in a budget 13.3” notebook, this CPU hits the sweet spot between performance and price, and still packs a decent punch. The Haswell i3-4030U CPU is definitely drawing closer to its announced EOL date (January 2017), but it can still be found in many 15.6” notebooks currently on sale.

The first benchmark we ran was the PCMark 8 Home accelerated, and the Martian A8 completed it 38 minutes and 36 seconds, and returned a decent score of 2383. 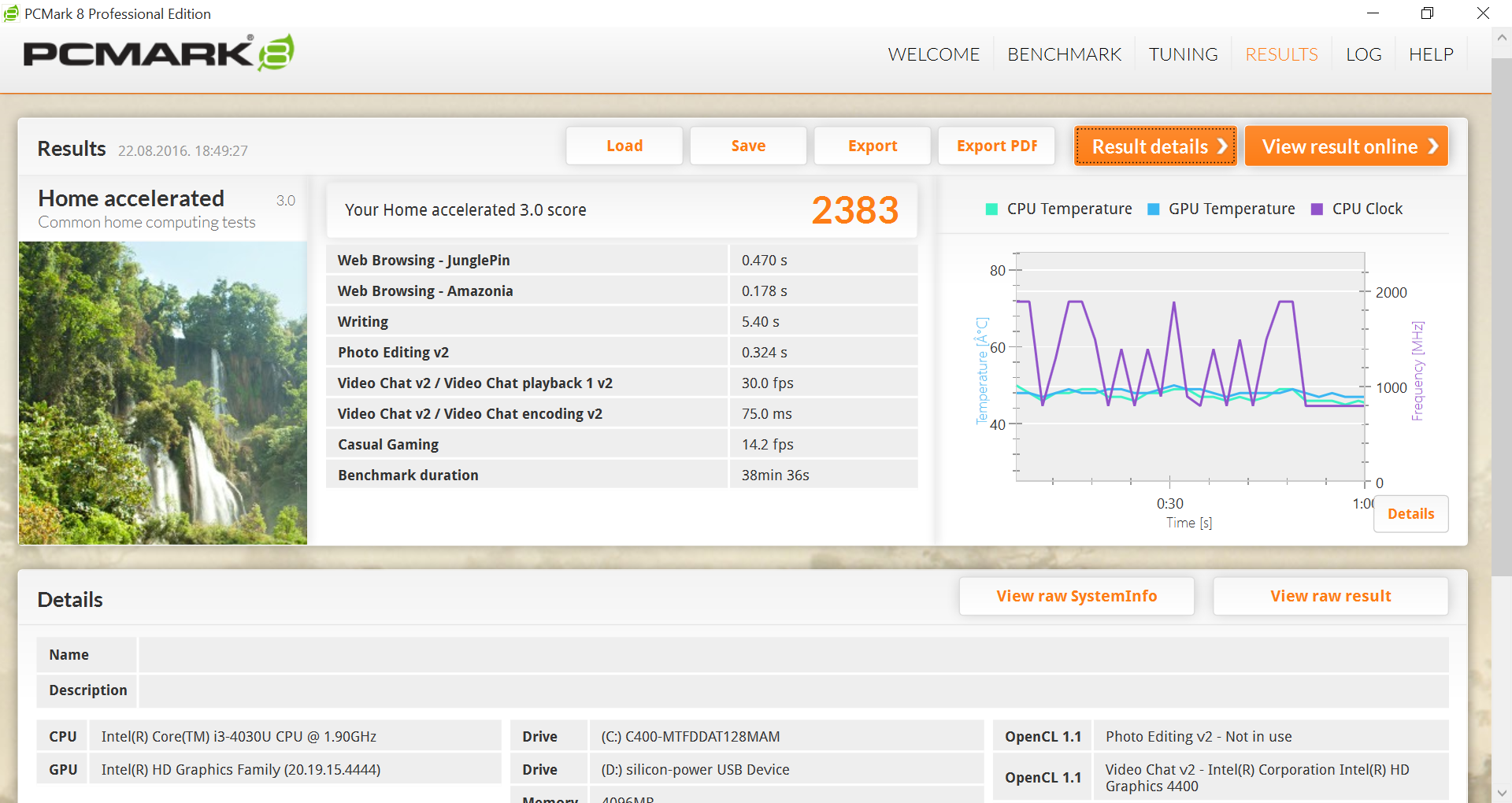 We monitored the thermals during the PCMark 8 benchmark, and the CPU temperature did not exceed 62 C, with the CPU cooler remaining pleasantly quiet at all times.

In 3Dmark Ice storm the Martian A8 managed to score 32417 without any driver or compatibility issues. 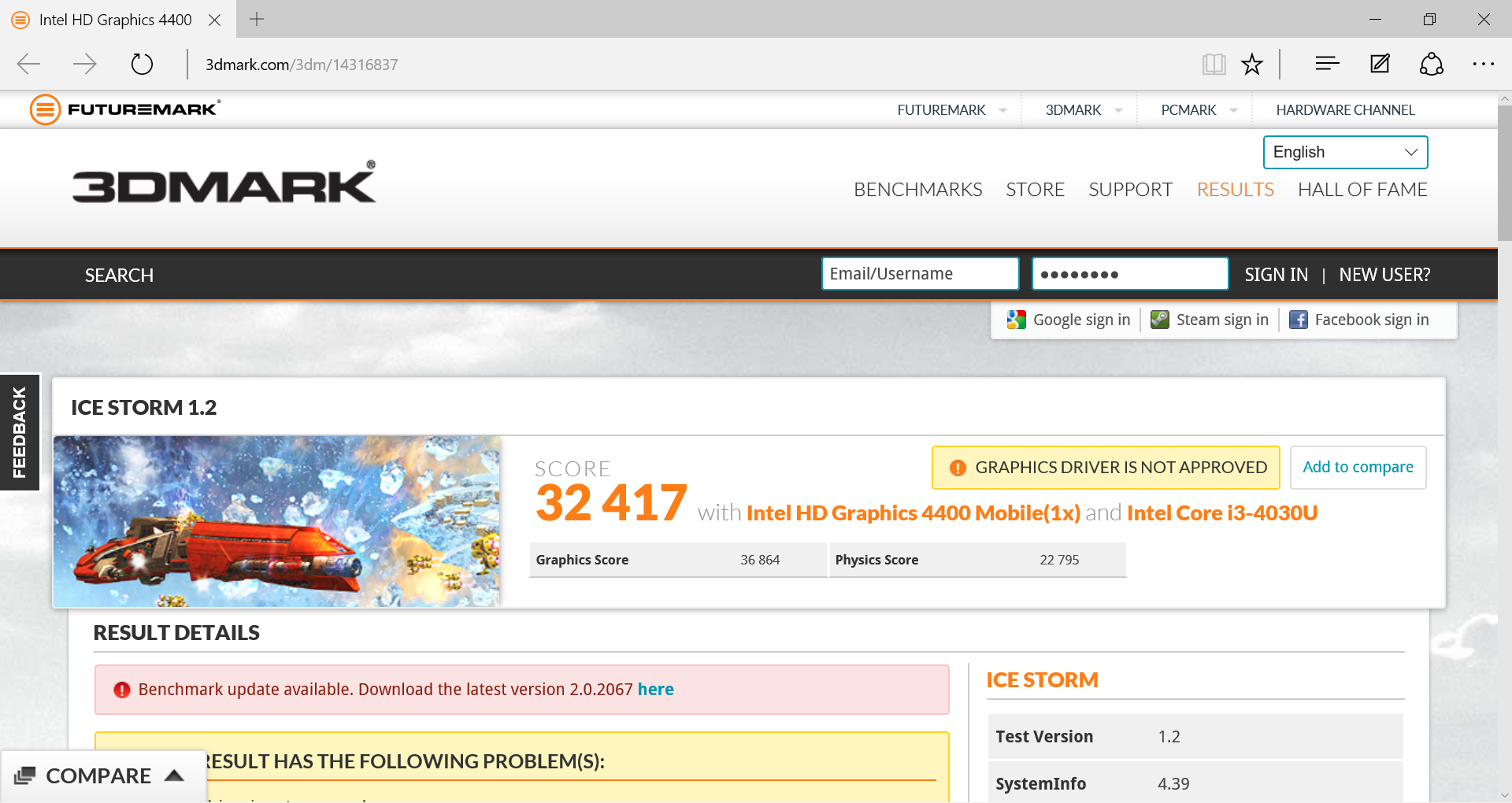 The main culprit for the smooth system performance besides the CPU, is the SSD drive. Running the Crystal Disk Mark revealed very nice performance levels of the Micron 128GB SSD. 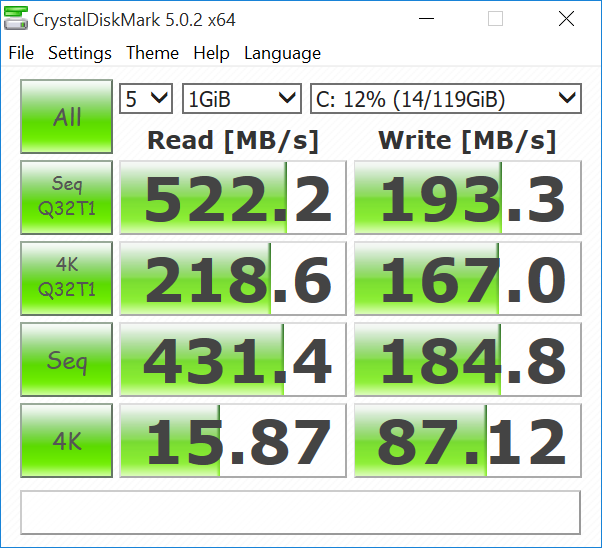 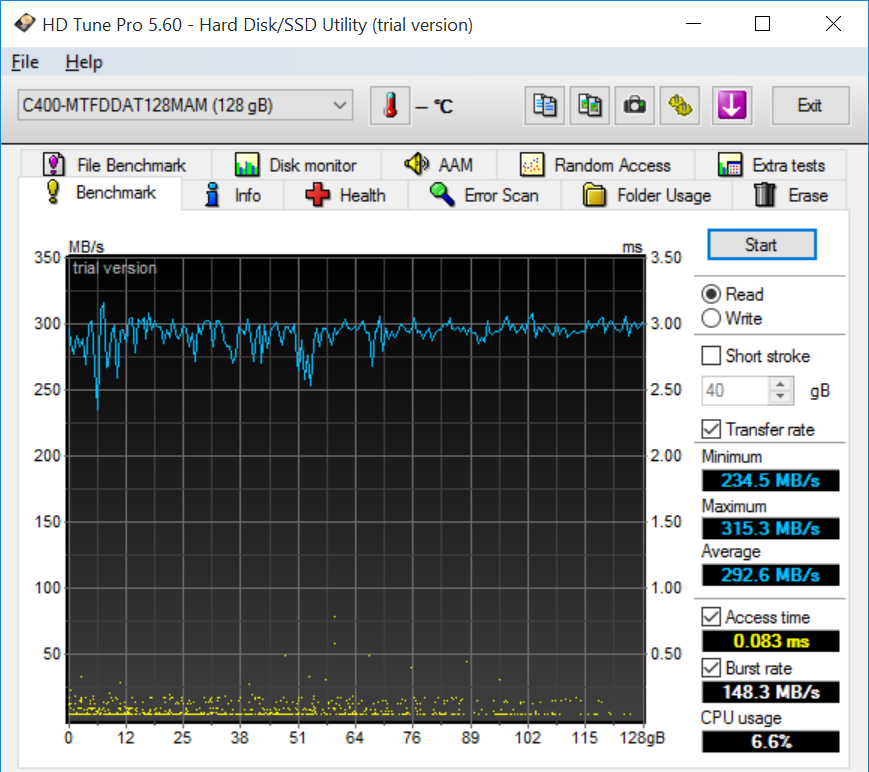 The Martian A8 notebook is available via GearBest, and currently there are seven SKUs to choose from. Prices start at about $350 for the cheapest SKU with a Core i3-4010U processor and 4GB of RAM.  The top SKU, based on the Core i7-4650U processor, is listed at $526. At press time, some SKUs are out of stock, and none of them are on sale. The SKU we tested is priced north of $400, but you can use the “fudzillaA8” coupon to get it down to $362, which sounds like a much better deal.

This is hardly bargain bin pricing, but then again, we’re talking about a proper notebook based on Core-series processors rather than Atoms. Looking at this price bracket in EU markets, we can find a number of similar systems, but most of them ship with glossy 1366x768 panels. FullHD models tend to cost a bit more, and there are next to no comparable devices with a matte display.

There is a lot to like about the A8, but we can’t escape the feeling that the design needed a bit more polish. As far as aesthetics are concerned, the cooling grille on the bottom just looks wrong and compromises the otherwise sleek design. Since it’s based on a two-year-old platform, the A8 also lacks support for 802.11ac wireless and there’s no USB Type-C port.

On the other hand, performance is still adequate, despite the fact that we’re looking at 22nm silicon. New 14nm processors would have been preferable, but they would make the A8 substantially more expensive, which is why it’s understandable the vendor opted to stick to cheaper 22nm processors instead. At $362, you just can’t expect the latest and greatest Intel CPUs.

Martian A8 pros and cons: