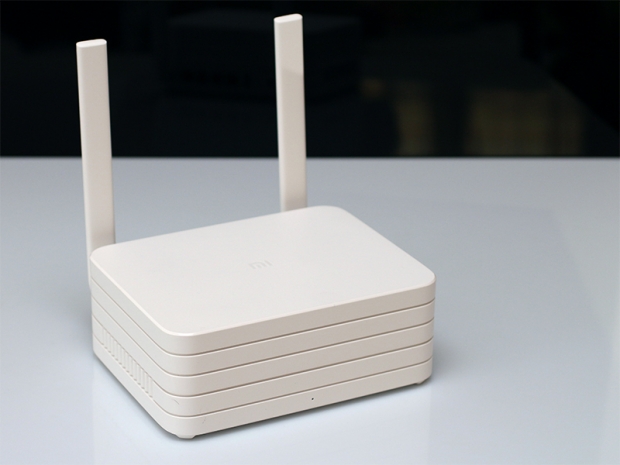 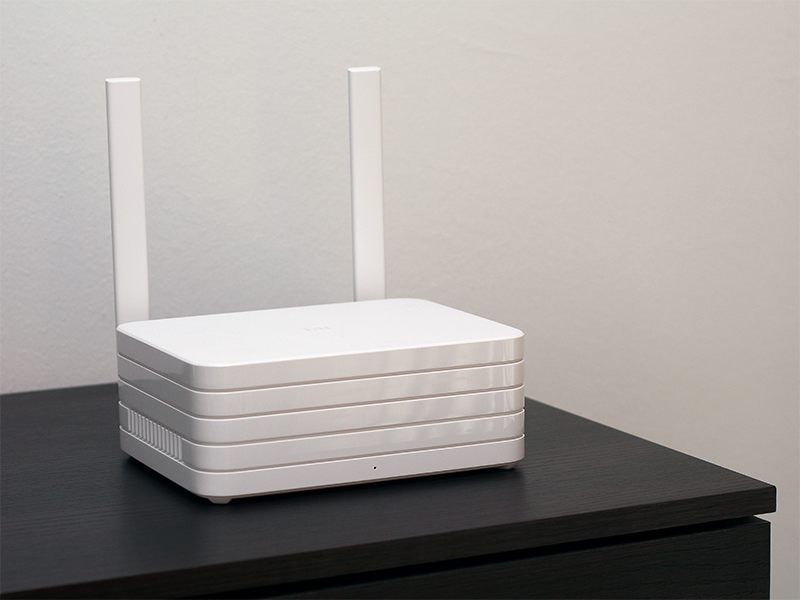 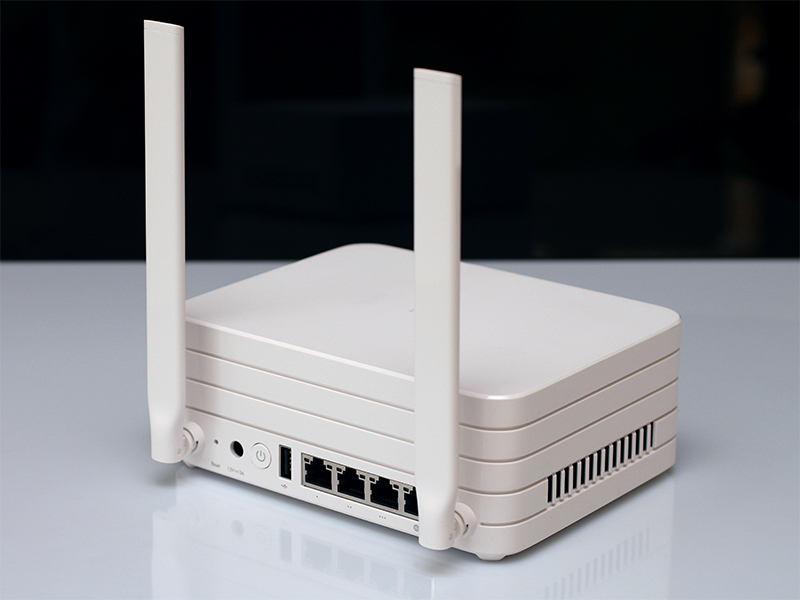 At first, we were surprised with the weight of the device – 1264 grams, the weight of an ultraportable notebook, or two 10-inch tablets! This thing feels heavy and it is built like a tank. Of course, it has to be on the heavy side, as it has a 3.5-inch 1TB hard drive under the bonnet, backed by an active cooling system. 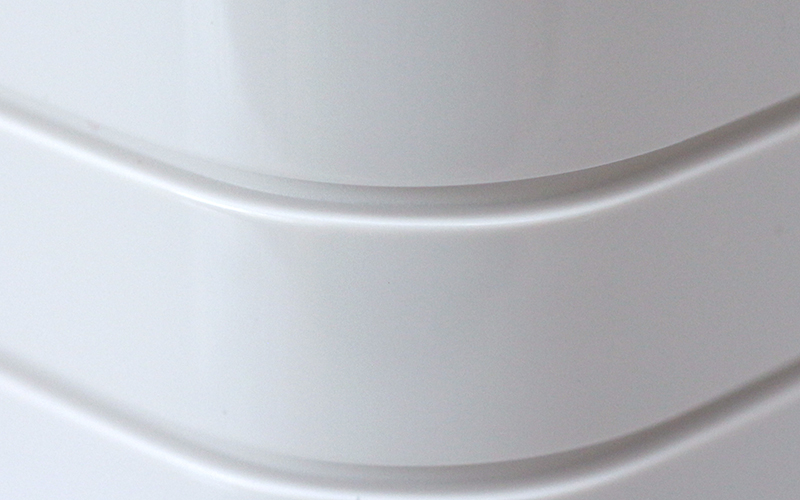 We were expecting a substantial device, but still, we were surprised. The finish looks and feels premium, like something you'd find on a smartphone or mini PC. 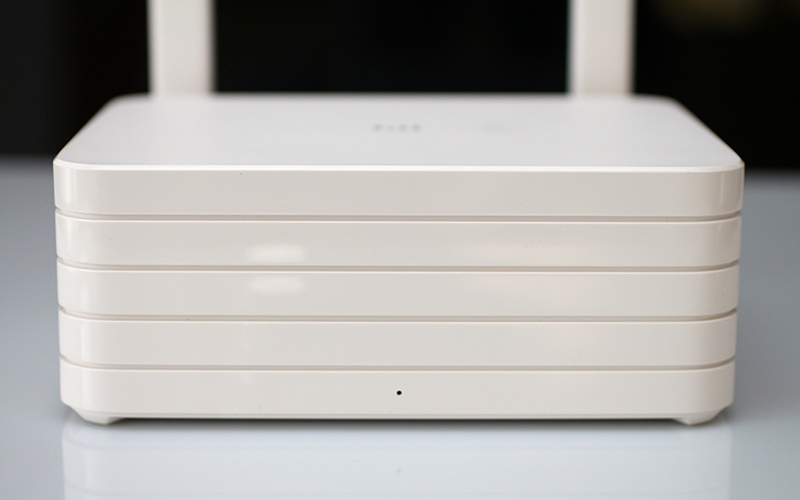 The front side features a single RGB LED that shows the status of the device according to its color: red, yellow or blue. 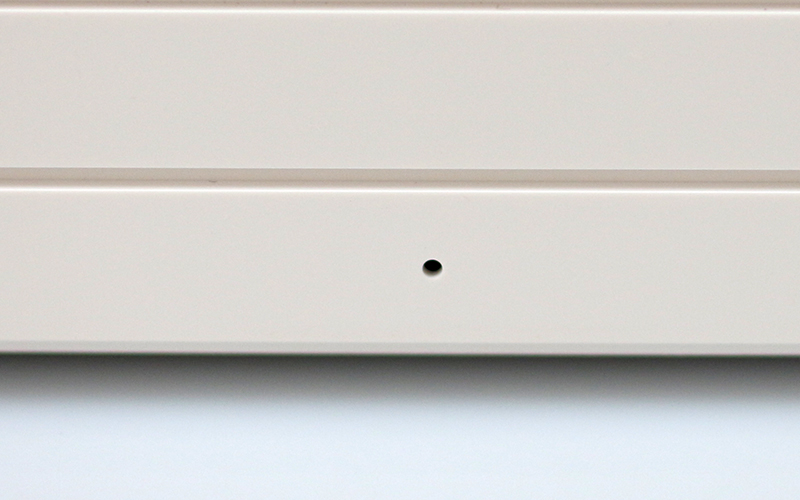 All the connectors are located at the back and everything is laid out logically. The router relies on 12V DC power, and the DC port is flanked by the power and reset buttons. 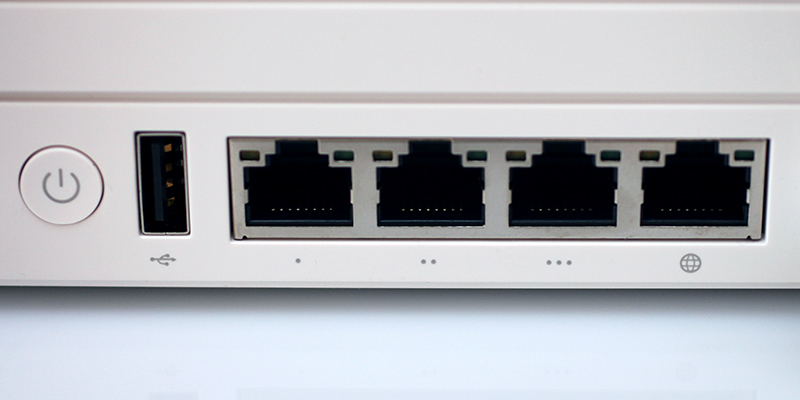 We have only one complaint about the layout – we are accustomed to the WAN port being colored differently than the LAN ports, Xiaomi could have highlighted the WAN port in a different color. 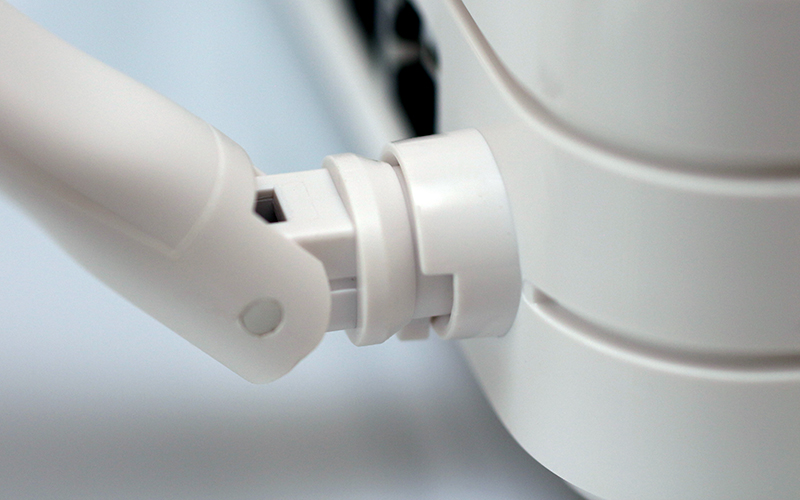 The antennas are located on the sides, as you would expect. 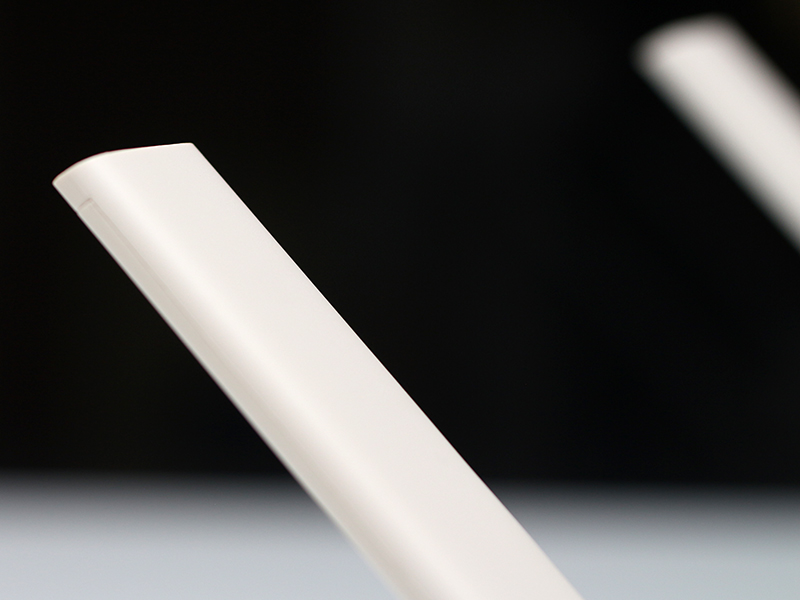 The internals are also well thought through, as this device sports various internal interference shields and an active air cooling system that wouldn’t look out of place on a graphics card. 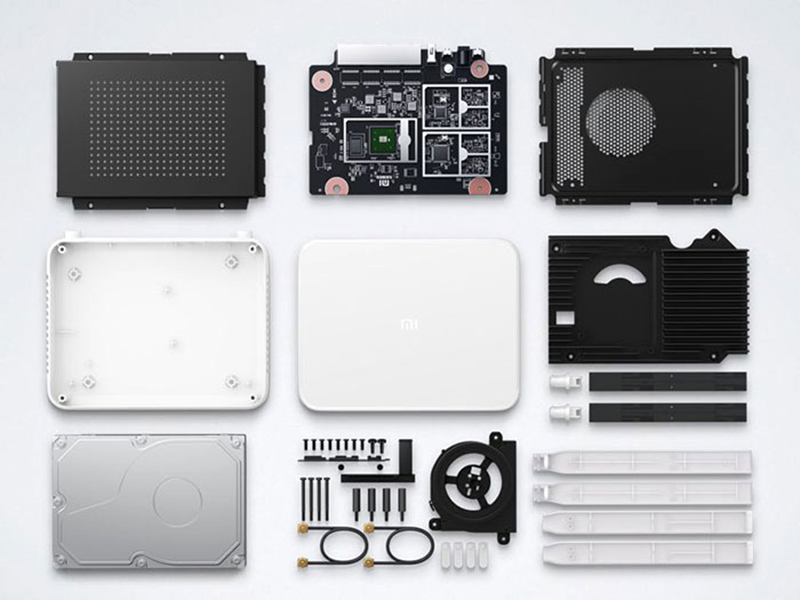 It's basically a blower-fan design, scooping up fresh air on the right and pushing it out through the exaust vents on the left. 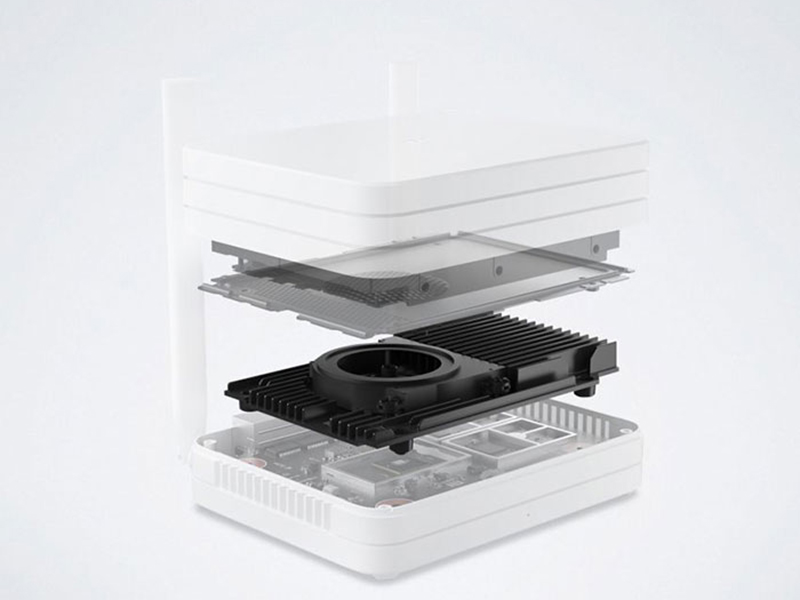 The cooler stays inaudible at all times, which is good if you plan to place the router in your living room or office. 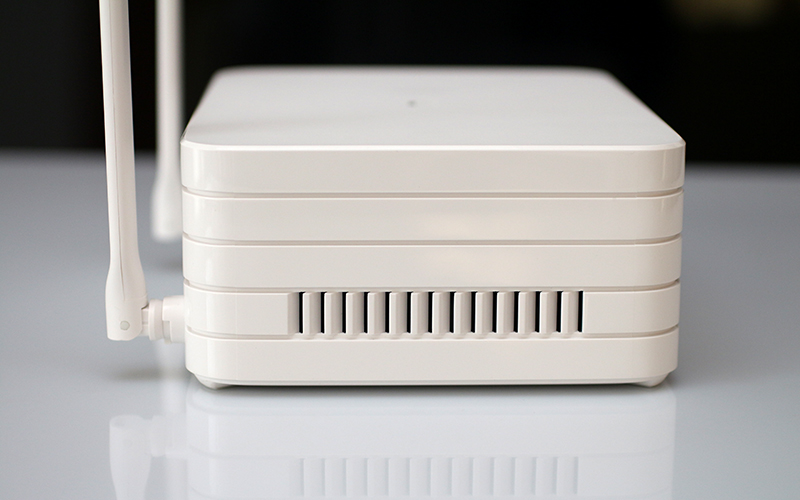 Another welcome feature is the use of two external PCB antennas, which help improve the range and signal coverage. Also, this router features smart signal tracking technology – beamforming – as implemented in the 802.11ac standard. 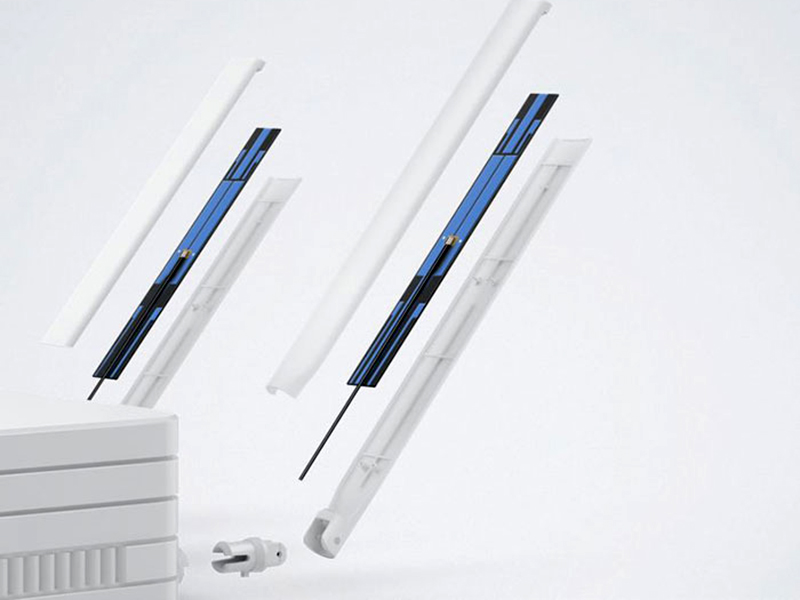 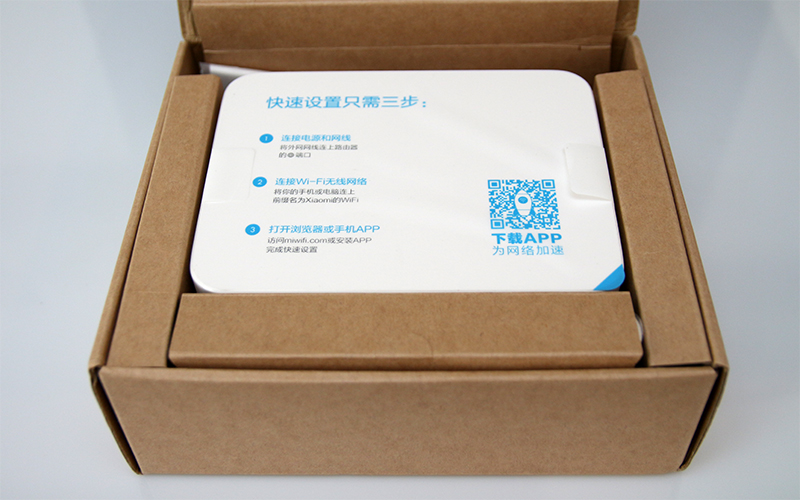 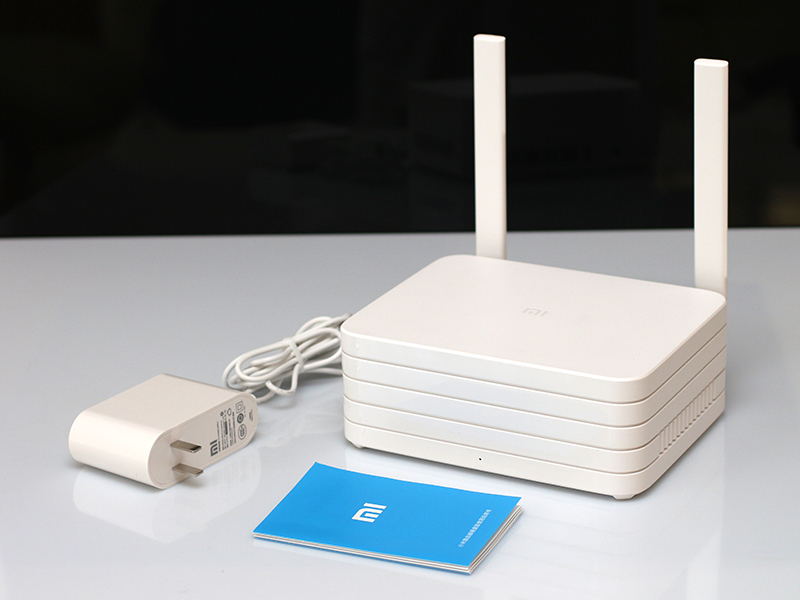 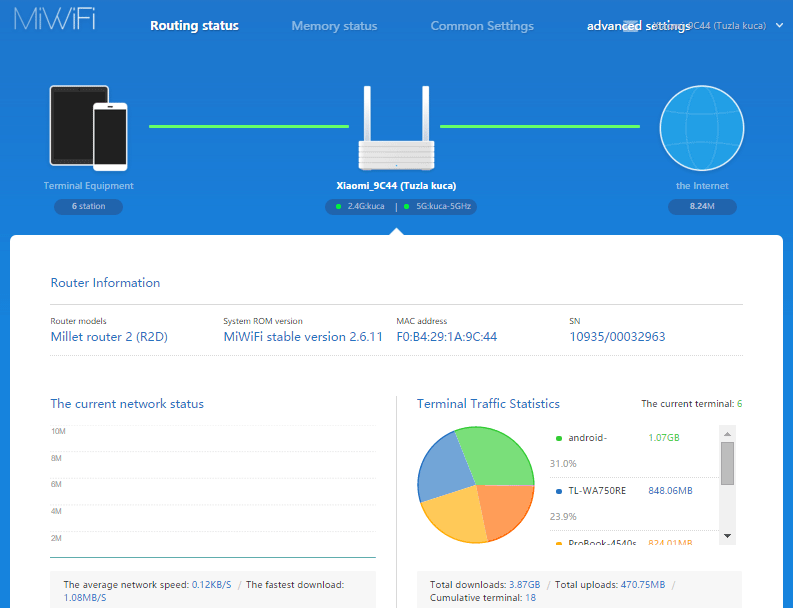 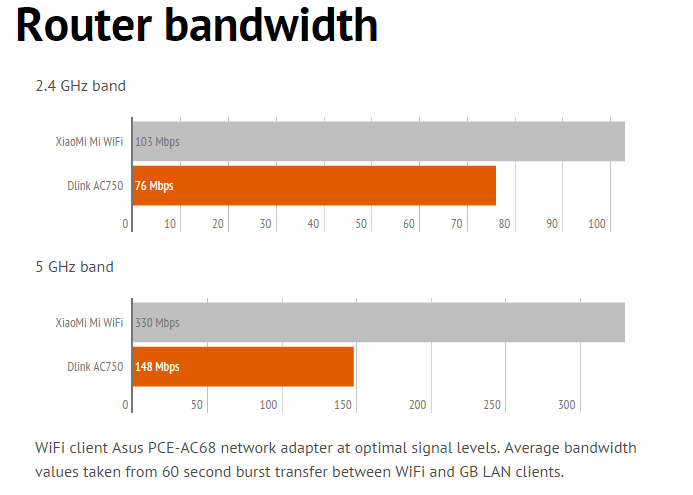 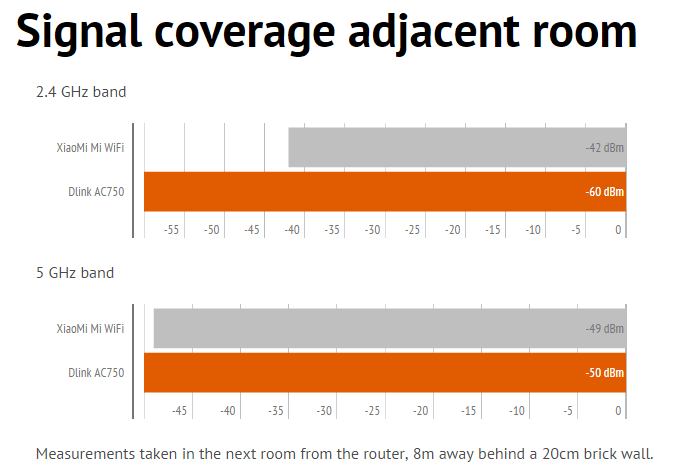 
User interface and everyday use

We noticed that the Xiaomi router app running on Android did not feature settings for the wireless channel, but it had some other settings that we did not find in the router's web UI. Router plugins and HDD management are only accessible from the Android app, there is no trace of these options in the web-based UI. These inconsistencies, along with the lack of proper multilingual support, are the biggest downside to the router.

The Xiaomi router offers all the advanced options commonly found on modern routers: you can create a visitors WLAN network, QoS management by client MAC address, you can assign default IP addresses for clients over their MAC address or block clients from connecting to your network.

There is also a time schedule option that can turn your WLAN networks on or off or schedule the router to power on or off, reboot and check for firmware updates, an automatic backup from USB to router HDD for cameras and other USB storage devices. 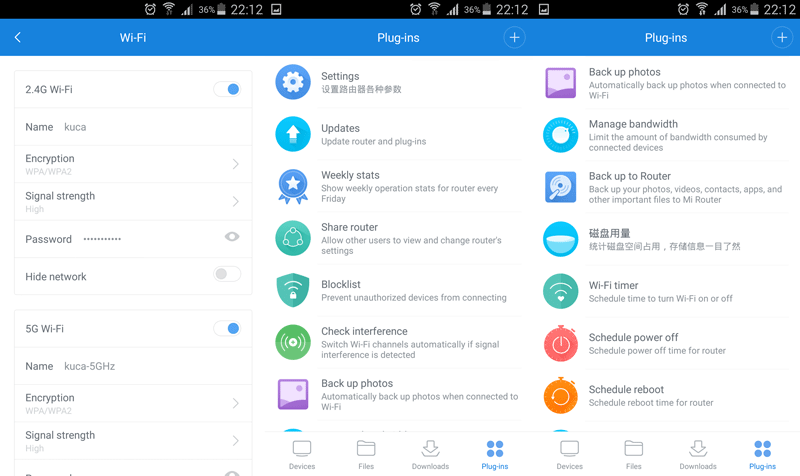 You can also install additional applications and plugins, like download managers, signal quality optimization tools (that messed up our 5GHz channel again), backup tools for smartphones etc. The Xiaomi router app also enables you to control your router and access files saved on its hard drive from anywhere, locally or remotely.

We also tried the Windows router app and we were disappointed to see that it was only available in Chinese, but it also offers different automated tasks like backup to router HDD.

NAS storage and DLNA worked like a charm every time, our TV made good use of the bandwidth of the 5GHz band for DLNA streams from the router's HDD. In theory, this router can do even more, but some of the plugins are in Chinese, so you would have to go through the trouble of translating and trying them out to see what they can do. Google Translate in web app - could be worse.

As usual, this is the biggest issue when it comes to Xiaomi networking gear – these products are designed for mainland China, so international users miss out on some features and services. However, we are happy to report that other Xiaomi gear we had laying around the office worked perfectly; a couple of phones and a Xiaomi TV box recognized the router instantly, and the TV box obviously stands to gain a lot from the added 1TB of storage.

The Xiaomi Mi WiFi Router 2 is a powerful 802.11ac box with a lot of nifty features. The device is available with 1TB or 6TB of storage, although the latter is rather pricey at $622.

We suspect most home users will go for the 1TB version. Of course, you could use the USB port to add a secondary drive should you need more storage. Needless to say, we would have been happier with a USB 3.0 port, but Xiaomi opted for USB 2.0 instead. Too bad Xiaomi doesn’t offer more storage options – we feel a 2TB, 3TB or 4TB version in between the currently available models would make perfect sense. 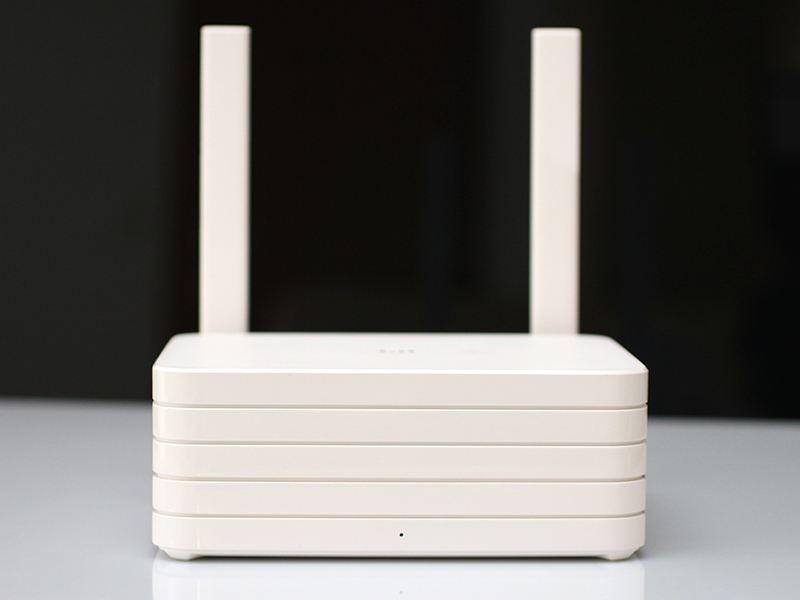 As a router, the device works quite well: The processor if fast enough to keep up with a lot of devices and operations simultaneously, signal strength and bandwidth are good as well. The 1TB drive obviously adds a fair amount of value to the product and makes it more flexible. A decent 1TB NAS drive would set you back about $100, so $169 for a speedy all-in-one router sounds like a good deal.

Like we said, the biggest downside is limited multilingual support. Xiaomi simply isn’t focused on international markets (at least not yet), so the mobile apps and web interface aren’t as good as they should be. For some people, this could be a deal breaker. However, if you don’t plan on playing around with the settings all the time, and if you just want a speedy router with integrated storage, the Xiaomi Mi WiFi Router 2 is a good choice.