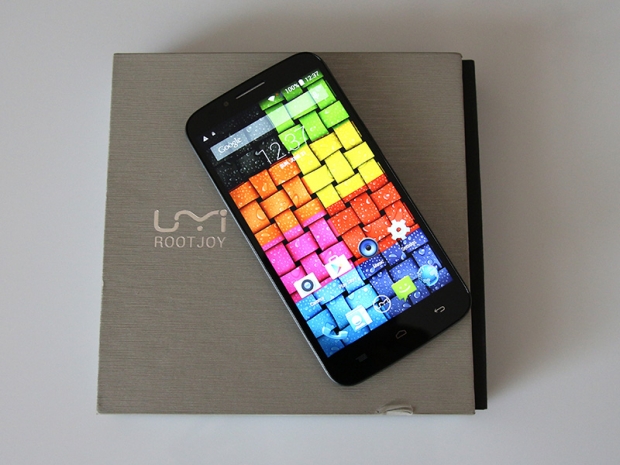 Chinese smartphone maker UMI has been around for a few years, and some westerners may be familiar with the company’s ultrathin Zero handset, or some of its fancy accessories, like stylish headphones.

However, the company’s latest budget phablet is not designed for fashion enthusiasts or audiophiles. The UMI Emax is going after the geek market, with a good price/performance ratio, 1080p screen, and the fact that it ships rooted. 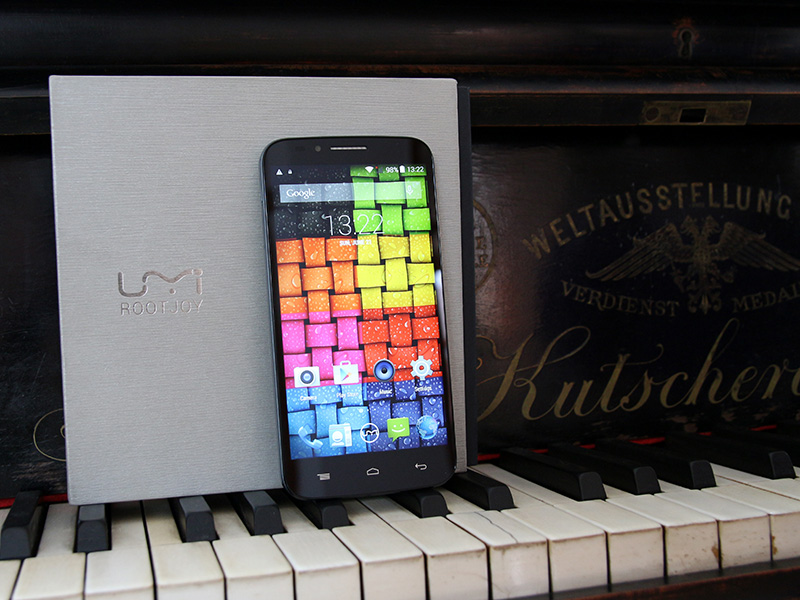 If you checked out some of our previous reviews of MediaTek-based phones, you’ll notice a recurring spec pattern: MT6752 octa-core processor, 2GB of RAM, 16GB of storage, 5.5-inch screen. The phone is available for $159 via GeekBuying. So what makes the Emax different?

Well, for starters the phone ships with an oversized battery that can keep it going for two days. It’s also rooted out of the box, and UMI has another trick up its sleeve, sort of. It’s called Rootjoy, and it should enable users to install stock Android 5.0 Lollipop, MIUI6, EMUI, HTC OS, and a few other ROMs.

It sounds like there are a few neat features to differentiate the UMI Emax from the rest of the field, so let’s take a closer look.

Since this is a $159 phone, you probably won’t be surprised to learn that the build is all plastic. Still, the phone feels solidly put together, there are no creaks and no flex. Measuring 152.3 x 76.5 x 7.9mm, and weighing in at 148g, the Emax is relatively compact for this product category; it’s thinner than most budget phablets, it’s not too tall, and it’s light. 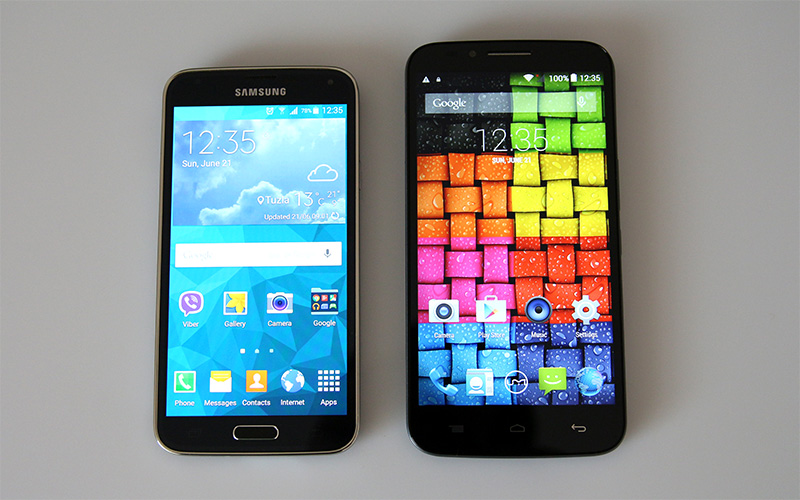 There is no removable back cover and all card slots are accessed from the sides. You can open them with your fingernail, but you’ll need one of those SIM removal tools you always keep losing to get the cards out. 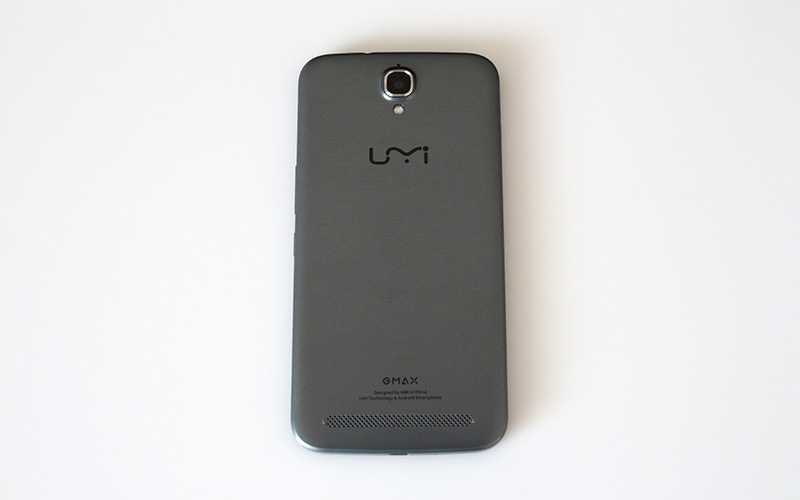 The faux-metal finish is not bad, but could be better. The back looks good and until you pick up the phone, you may mistake it for a brushed aluminium device like the HTC One series. However, the tactile feeling is quite different. We also noticed a few minor imperfections, but nothing too bad. The good news is that the textured finish keeps fingerprints and smudges at bay. 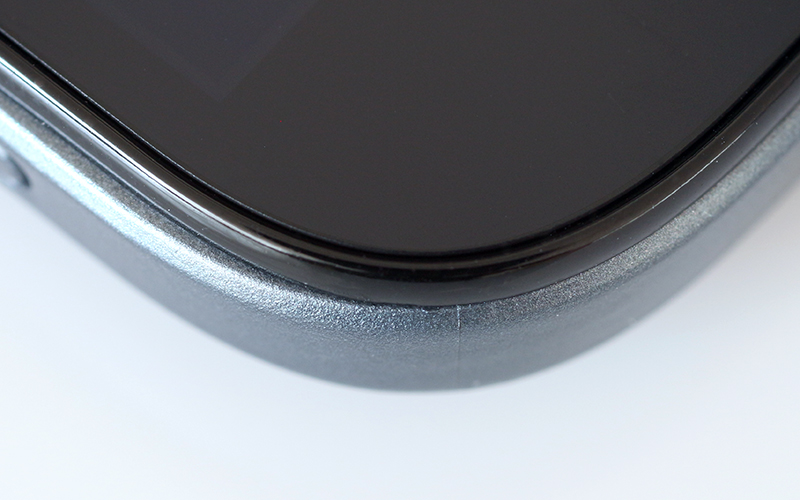 Silver and dark grey colour options are available, and we thing the darker one makes a bit more sense. Apart from some subtle branding, there’s not much to set the phone apart from the competition. 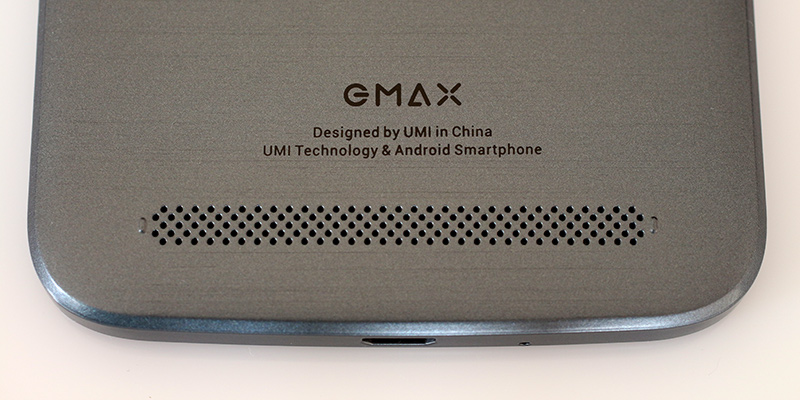 The oversized speaker grille is a nice touch, but don’t get your hopes up – you still get an average mono speaker.

The card slots are covered by plastic flaps attrached to the phone with a bit of rubber. They can be undone with  a fingernail, but you'll still need a SIM-removal tool to pry the cards out.

The camera lens and single LED flash are at the centre of the device, above the UMI logo. 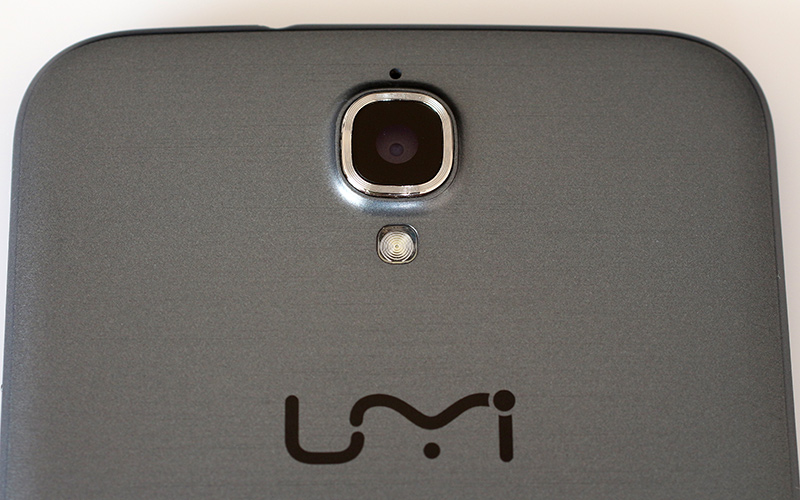 The front is just as plain, if not more so. The capacitive buttons have the “back-on-left” layout, but they don’t use the latest icon designs, introduced with Android 5.0.

Overall, the design is understated and pleasant. The logo might be a tad too big, but it’s understated (at least it’s not chrome or something). It’s not a truly original design, but it’s not a complete rip-off of a bigger brand either. Sure, it has some Motorola DNA and a few HTC genes, but it’s somewhat different than either of them.

Since we tried out our first MT6752 device a few months ago, we’ve come to expect a lot from MediaTek’s mid-range octa SoC. The Emax does not disappoint; it delivers good performance, and it has a few things you usually don’t find in similarly priced phones.

The spec is more or less standard for this type of advice, but the Emax stands out in the display and battery department. A 1080p panel in this price range is still a nice touch, although devices like the Meizu M2 Note and Lenovo K3 Note, which we recently reviewed, offer 1080p at the same price.

The 3780mAh battery is another good selling point. We’ve tested devices with almost the exact same hardware platform with 2600mAh and 2800mAh batteries, so the extra juice is definitely a welcome addition. Plus, it doesn’t add to the girth or weight. The Emax is almost exactly the same weight and thickness as the Lenovo K3 Note, although the latter has a removable back cover. 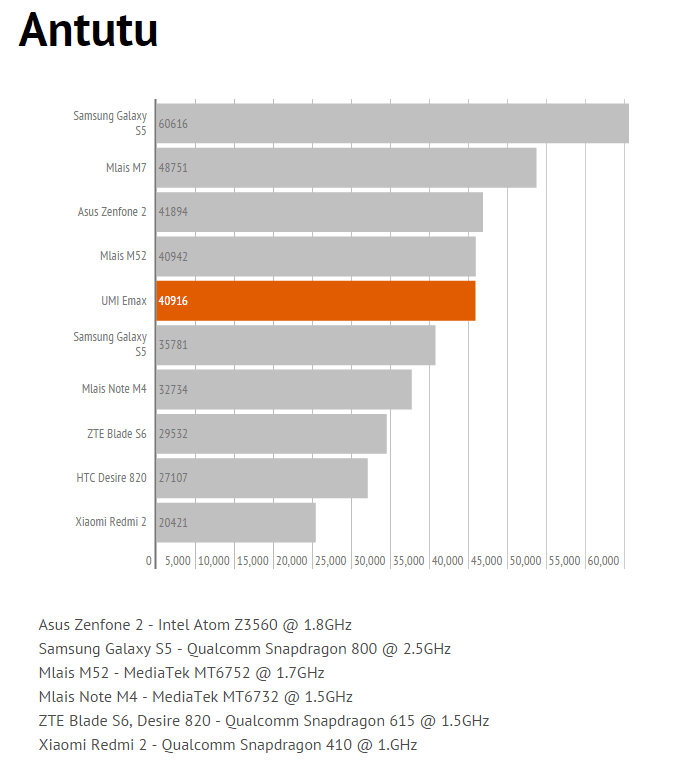 The UMI Emax is a fast device, but it's not as fast as some MT6752 phones we had a chance to test. 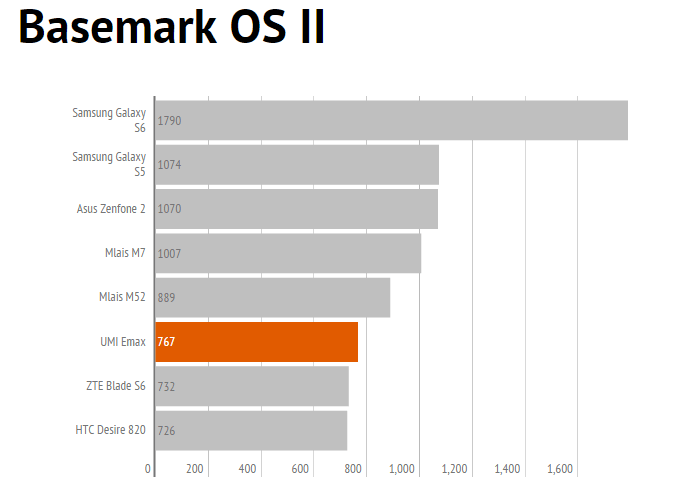 The biggest drawback of using the MT6752 on a 1080p device is that the GPU is simply not powerful enough to keep up with "big-core" processors used in flagship phones. 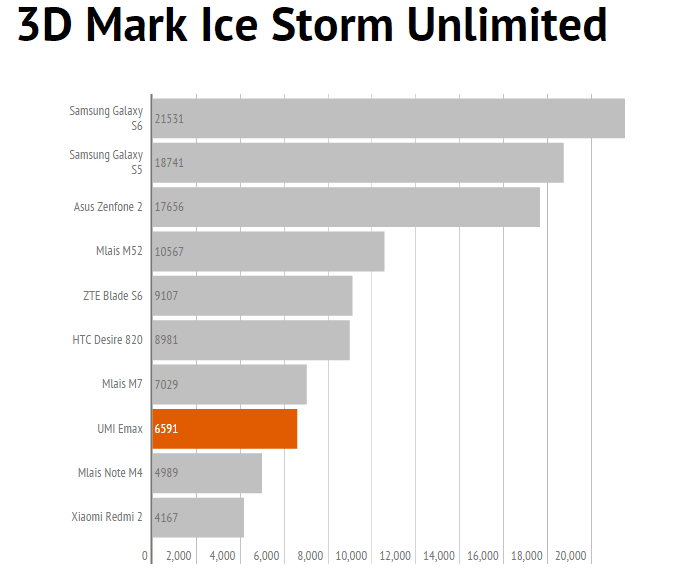 Overall, performance will not be an issue should you choose to get this device. It’s on a par with other devices based on MediaTek’s MT6752, and we’ve already concluded that this is pretty much the best price/performance chip out there today.

Bottom line – if you’re in the market for a sub-$200 phone, you can’t get faster hardware than the MT6752, and there’s really not much more to say.

The 1080p panel is quite good, and somewhat better than the one we had a chance to see on the Lenovo K3 Note. 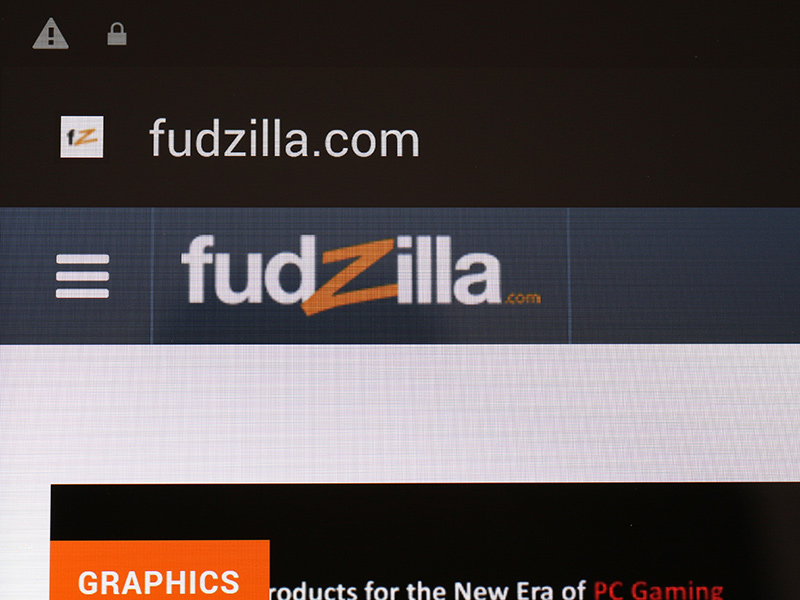 We have no complaints about colour reproduction or viewing angles. Our biggest issue with the screen is that we don’t really know what sort of glass is on top. The spec merely states it’s an OGS fully laminated panel, and that’s it.

Audio quality is average. The rear-firing speaker is adequate, but not spectacular. Call quality is good, everything is loud and clear, nothing to see here, uhm, hear. 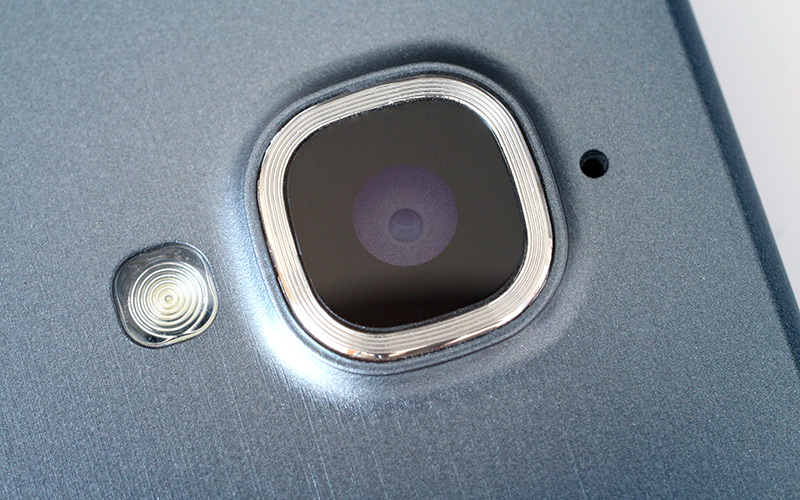 As for the cameras, things could have been better. UMI does not say much about the sensors in its spec sheet. It merely states that the front-facing 5-megapixel shooter has an f2.2 lens, and that’s it. We don’t know what sort of sensor is in either camera.

The main camera delivers below average results. We suspect it doesn’t have a very fast aperture, so low-light shots can be troublesome, but the focus issues will soon make you forget about the aperture. 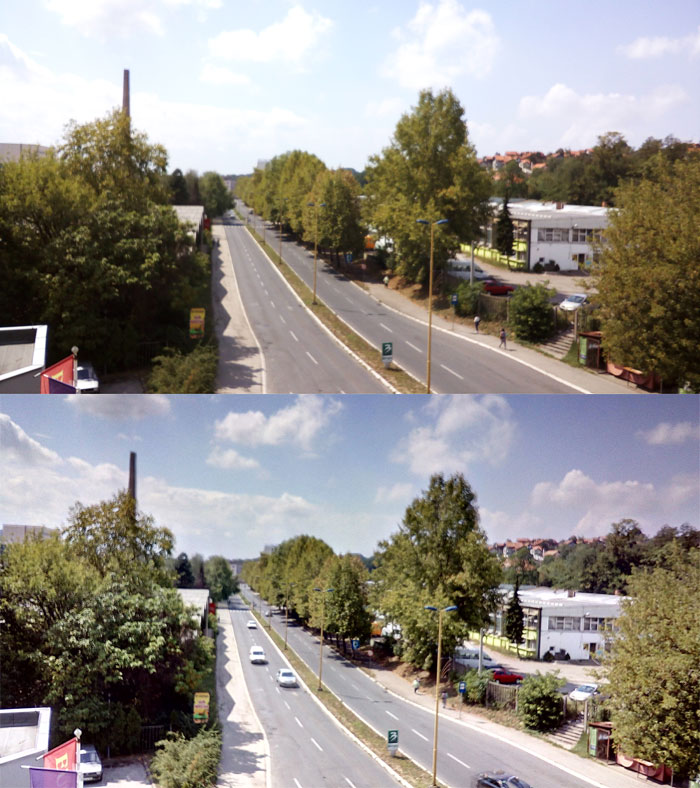 The camera seems to have trouble focusing in certain situations, namely when you need infinite focus, which we found quite odd. HDR helps, but it does not fix the focus issue, and generates a bit of ghosting as well.

Indoors, the situation is somewhat better, as the camera focuses well and produces decent snaps. 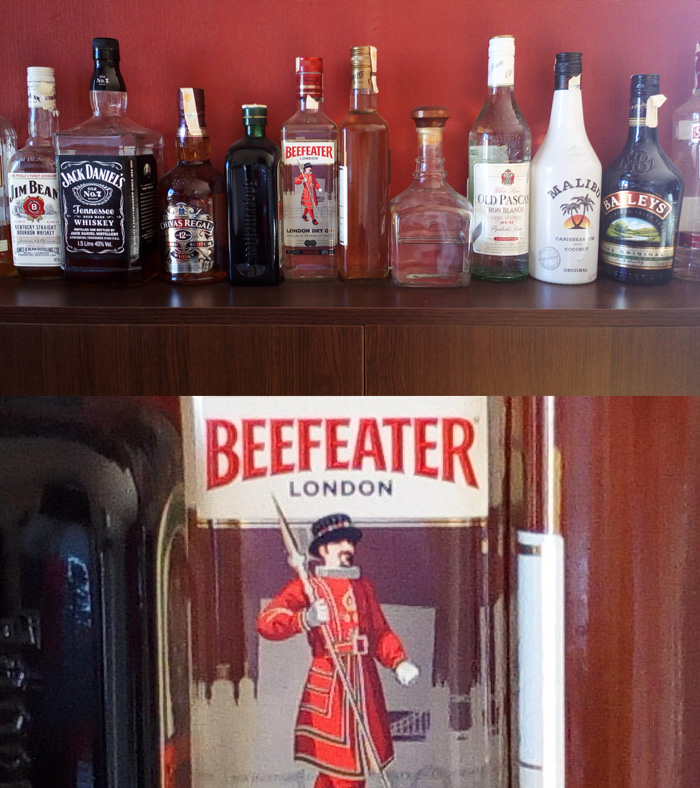 As our 100% crops in daylight and under incandescent light prove, the camera can do a good job. The colours are good, and a lot of detail is preserved even at night. 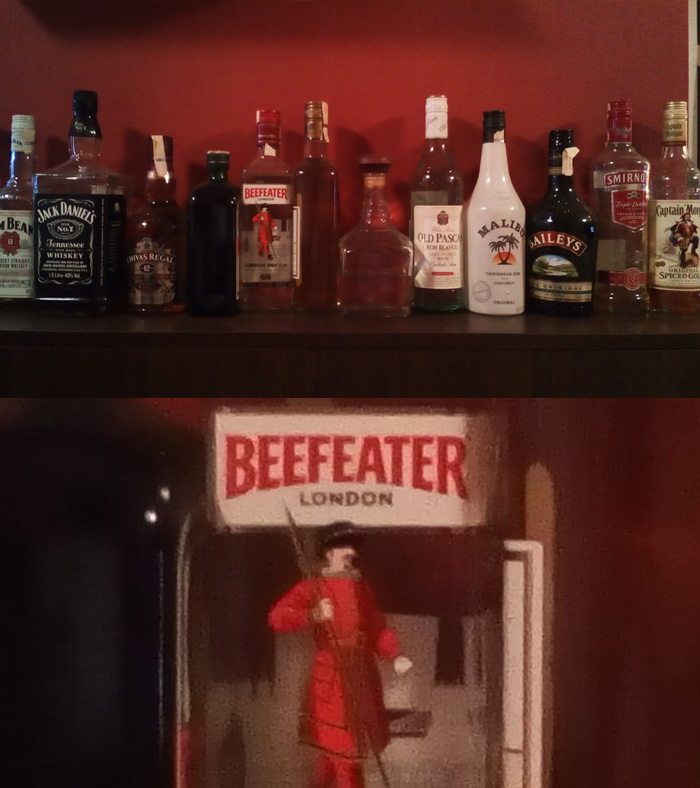 However, the camera is let down by the quirky focus outdoors. Compared to other Chinese phones with 13-megapixel cameras we had a chance to test, the UMI falls short. 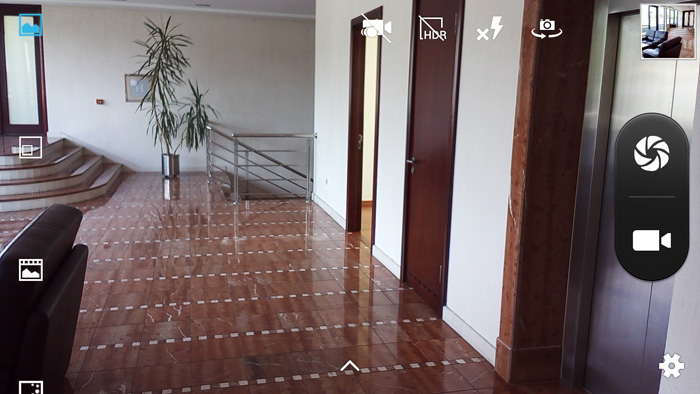 The camera app UI is quick and easy to understand, no complaints there.


OS, UI and Everyday Use

UMI’s idea of shipping pre-rooted phones isn’t new, and it’s Rootjoy software is supposed to allow users to easily go back and forth between different ROMs. Don’t like the look of stock Android? You can make your phone look like a Meizu, HTC or Xiaomi, no problem.

Except there is one: we couldn’t get it to work. Now, this could be down to us and our sample unit, which is a pre-production model. In theory, users should be able to install Rootjoy on their computer and simply flash ROMs as they see fit. Granted, it’s not for everyone, but like we said, UMI is going after the geek crowd with this particular model. It’s really a pity we were unable to test this feature, as it could attract a niche audience. 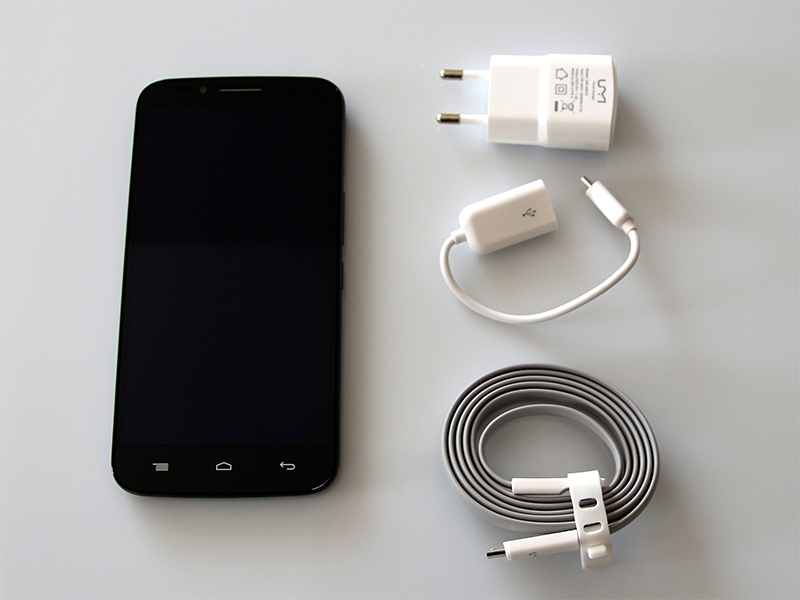 So, we are left with the Emax as a standard phone, and we are happy to report it performs admirably. It’s responsive and the hardware clearly has no trouble dealing with all the usual stuff. Our biggest complaint is that there’s a fair amount of bloatware to deal with. Fortunately you can get rid of it, but we’d rather not get any to begin with. Advanced users should have no problem with this, or the stream of notifications common to rooted phones. It just takes a bit of tweaking and you’re good to go. However, it’s really not a phone you should buy as a Mother’s day gift.

As far as everyday use goes, the best thing about the Emax is the battery. You can get two days out of it, easy. If you are really careful, this can go up to three. This is quite good for an oversized phone, and there’s another feature worth mentioning. UMI ships an OTG cable with the Emax, so you can use it as an emergency powerbank to charge other phones. With 3780mAh on tap, this makes sense, as you can feed a few hundred milliamps to a buddy or your significant other on a hiking trip without starving your own phone. In addition to the OTG cable, the box includes another USB flat cable and a 1-amp travel charger.

We have no complaints about the ergonomics, either, although the tactile response on the buttons could have been better. Thanks to its shape, the phone feels good in the hand, and one-handed operation isn’t much of a problem.

UMI had a good idea with the Emax: provide a well-specced, pre-rooted phone for the masses. Not all enthusiasts can afford to spend a fortune on a new flagship, and the Emax was designed to tackle this niche.

It sounds ambitious, perhaps too ambitious. If Rootjoy worked properly, and if the camera was on par with other phones in the same price range (the Lenovo K3 Note comes to mind), UMI would have ended up with an excellent device for enthusiasts on a budget. The oversized battery is certainly a redeeming feature, but if you’d rather have a good camera than a few more hours of standby time, look elsewhere. 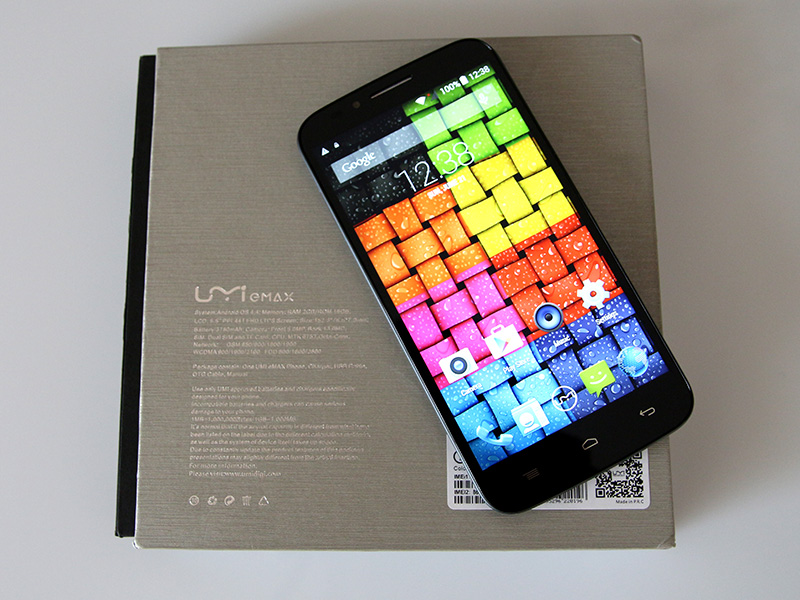 Luckily, value for money is not an issue. In spite of its foibles, the UMI Emax is still a very cheap device with a hefty battery and some interesting features. However, with a few more software tweaks, it could have ended up much better. We can only hope the company will address these issues with future software updates. The UMI Emax is not a bad phone, it has a good screen, great battery and delivers excellent performance on a budget, so it’s still worth considering if you are after a powerful budget phone.

Our biggest problem with the Emax is that it could have been so much better with a bit of careful polish.