Get a Brand New PC For Free, Almost 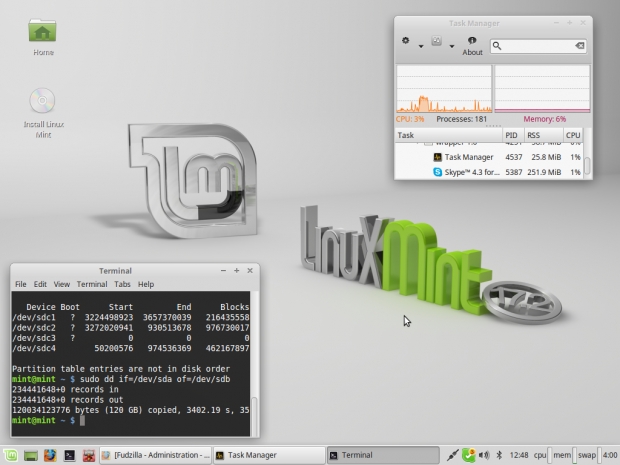 Breathe new life into your old PC with GNU/Linux

Who doesn't know that new-gadget-itch? ...when you *need*  to spend money on the latest and greatest whatever, because the thing you have on your desk or in your pocket is just too damn slow! Or the resolution isn't high enough. Or it doesn't run the latest and greatest software (Windows 10 anyone?). Maybe it's ugly. Or.... Admit it, you're just bored and want a new toy.

Well, yours truly just got a new exciting toy, without spending any money, or going to a shop at all, real or virtual. The story is kind of long and curvy, but bare with me.

This Dell netbook has been with us for five years now. Inspiron Mini 1012, to be exact. It's a 10" netbook, with an Intel Atom N450 processor, single core, dual-thread, ticking away at 1.66 GHz, with 1 GB of RAM. What that specification doesn't really make obvious is that the processor inside the machine you're reading this on is probably between 20 and 30 times faster in common benchmarks. 20 to 30 times! On the other hand, how fast exactly does your computer need to wait for you to type that homework assignment out? ;) The reality is that the vast majority of our processors' time is wasted sitting idly between occasional tasks that actually make use of them. Unless you're an avid gamer (in which case, get a life), or do engineering, image or video processing, of course.

Back to the little Dell. We've been in love with the machine ever since it landed on our doorstep. It's not up to the task of being a main computer, but it's exceedingly portable, durable, it has a really great little keyboard, the touchpad works surprisingly well for a PC laptop (even today it's a miracle to find a good touchpad on anything that costs less than 1.5k of your favorite currency) and it has an SD card slot. That last bit makes it an ideal holiday companion. I usually take many more photos and hours of video than anyone is willing to suffer through, so when the cards get full, I just dump the material onto the Dell and upload it to the cloud when I'm back in WiFi land. The machine has traveled the world many more times than a US presidential candidate, stoically endured all the bumps and bruises, and it still looks way better than Donald Trump.

So, why are we covering it today? Well, Windows 10 arrived and with it lots of spit and polish and general new-ness in various devices around the office. The little Dell with its 1 GB of RAM and the obsolete processor wouldn't even consider upgrading. The old Windows 7 installation on it, on the other hand, has felt ridiculously slow for a long time now. It really falls into that category of "push a button, go make coffee, drink coffee, come back, there is a few seconds left until the completion of whatever the button press started". Something needed to be done, or we were in real danger of clicking "confirm transaction" on one or another online store and the credit card is already worn out anyway. So with a bit of excess time on my hands we turned to our old friend - GNU/Linux.

The free and feature packed Linux Mint recently released its new version. "Rafaela", or version 17.2 is a long term release, set to be supported until 2019. As always, there are 32 and 64 bit flavors of several desktop environments you can choose from: Cinnamon, MATE, KDE and Xfce. Like many of you probably, we would normally choose the one with all the bells and whistles, and in the case of Linux Mint, that would be Cinnamon. However, since we're dealing with such an old and underpowered PC, we downloaded the 32 bit Xfce edition. People say that it is the least taxing in terms of its hardware demands, so let's give it a try.

Before you decide to follow this procedure, make sure you've backed up your data. It's always a good idea to have a separate partition for the data anyway, so even if everything with your OS and programs goes to hell, you don't have to worry, as you can reinstall it all easily. It's losing your data that will bite you in the ass. Consider yourself warned.

A quick download of the Linux Mint 32 bit Xfce ISO, one unused flash drive (pretty much any capacity you can get today will do, we had a 16 GB one lying around) and the experiment was underway. LinuxLive USB Creator is one of many simple Windows programs you can use to put the Linux Mint installation on your flash drive. It creates a "live" version of the OS, which will work directly from the flash drive, not changing anything on your main HDD/SSD. It's great for trying things out, without destroying your old setup – all you need to do to go back to the old ways is reboot the machine without the flash drive plugged in. An added benefit is that, since there is no real installation, your new OS is ready for use within minutes. If you end up liking how everything works, there's an "Install Linux Mint" icon on your desktop, so you can make the switch permanent.

And, our experience with the entire shebang?

Well, suffice it to say that we clicked the "Install Linux Mint" after only a couple of hours of first trying it out. The little Dell feels at least four times faster than under Windows 7, it's like a whole new laptop. It boots in less than quarter of the time, Firefox, Chrome, office and other programs launch pretty much instantly, the whole system feels incomparably more responsive. The 1 GB of RAM all of a sudden feels gigantic, like in the good old days of Cyrix processors. And, this not being windows, there is no constant nagging with updates, or the thousands of virus threats.

Most GNU/Linux distributions these days come with LibreOffice. It's a completely free MS Office-compatible suite of programs, including replacements for Word, Excel and Powerpoint, which has grown into a very competent package. The best part of the newest version, LibreOffice 5.0, is that it is for most people's needs perfectly compatible with MS Office and the developers have focused a lot of their attention on making it lighter and faster. That it’s visually more similar to MS Office 2003 than to 2007-2013 with that crazy ribbon toolbar is an advantage in many a professional's book.

And Linux Mint with Xfce as a whole is also very user friendly. A friend of ours who has absolutely no experience using GNU/Linux could find his way around the OS instantly, without us having to explain anything. That is one major win for the GNU/Linux developers community!

The only caveats we have are:

To summarize, if you feel like it's time to check out the newest hardware offerings now that Windows 10 is out and Intel is starting to launch Skylake generation processors, have a look around. Maybe you too have an unused old PC that you can't stand because of its lack of speed or features. It might very well be that a new operating system will breathe new life into it. In our experience, Linux Mint 17.2 is an excellent candidate! If you do give it, or another GNU/Linux distribution a try, let us know how it went.