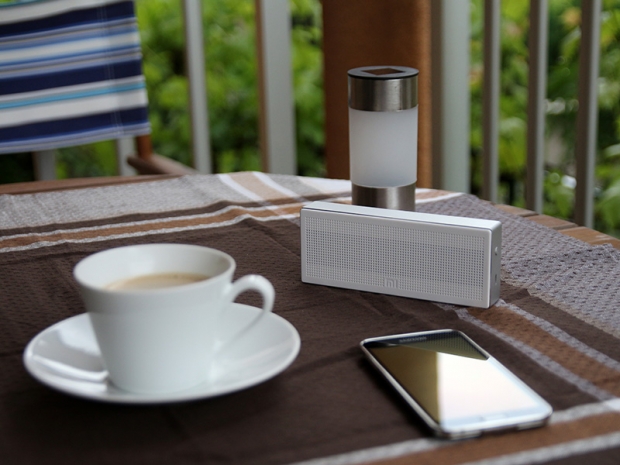 Review: Going stereo on the cheap

Xiaomi’s recent dive into the accessory market has resulted in a number of unusual and interesting product launches, ranging from audio accessories to aluminium mouse pads.

The Chinese mobile giant also introduced a new Bluetooth wireless speaker, and this time around it’s a proper stereo box rather than a single-driver design like the cylindrical Xiaomi speaker we reviewed earlier this year. The differences don’t end there. 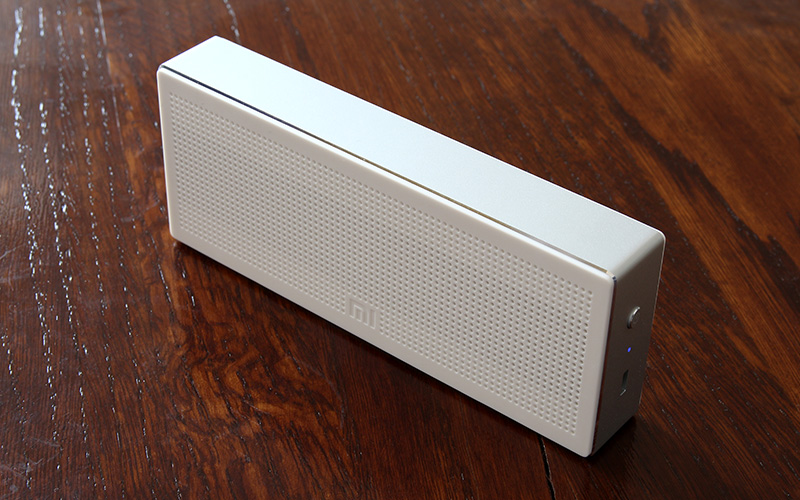 The new stereo boom box features a completely different, rectangular design with a white ABS plastic grille and aluminium chassis. There’s no microphone, either, or on-board controls save for the power button. 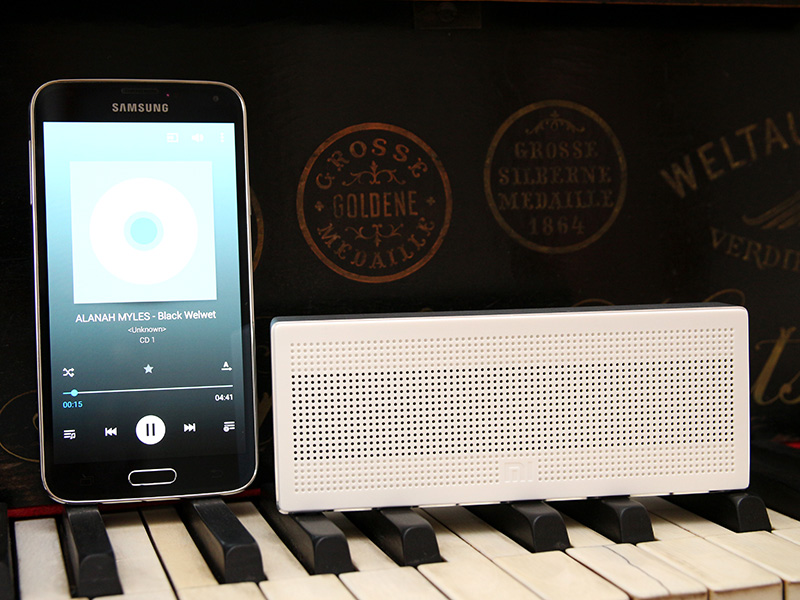 While it’s a new design, it’s unmistakably Xiaomi – and that’s a good thing in our book. 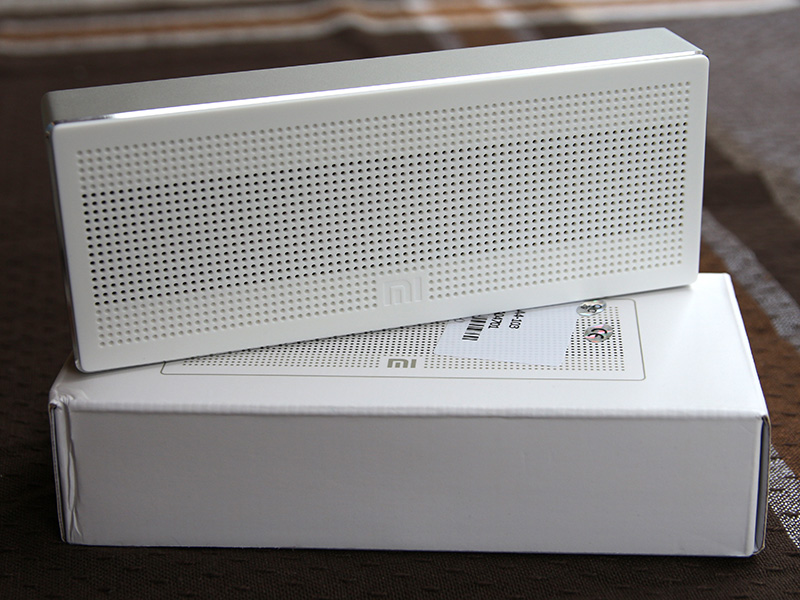 The minimalistic design has Xiaomi written all over it, and build quality is second to none. The appearance and tactile experience don’t leave any room for complaints.

The retro design reminds us of 70s JVC transistor radios and Grundig tape players, the sort our dads used to keep track of Platini’s and Beckenbauer’s latest exploits, or the early days of the Iran-Iraq war.

The chassis is aluminium and it’s crafted to perfection. The thick, ABS grille is milled and feels good. 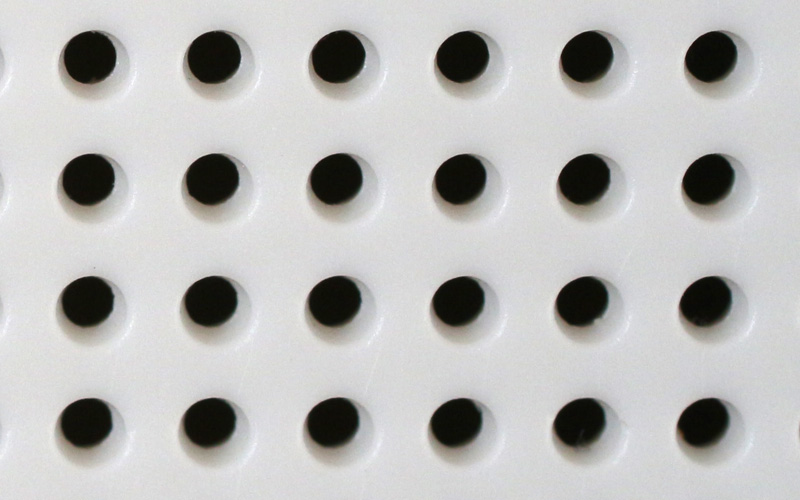 We’ve come to expect exceptional build quality from Xiaomi and we’re not surprised. The new Xiaomi speaker box is beautiful to behold, and overall it looks and feels like a premium product. 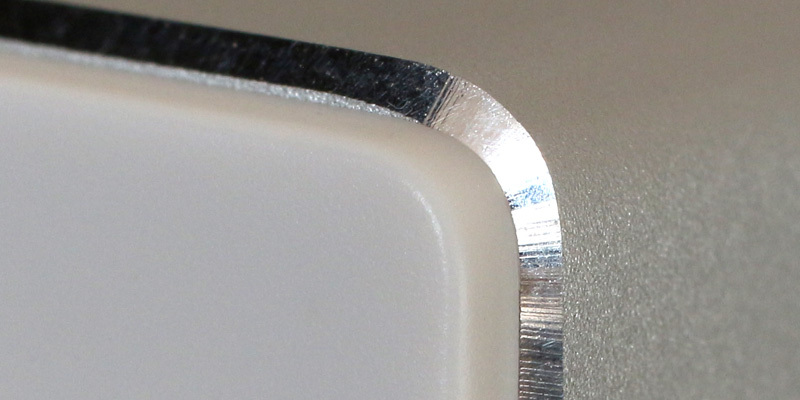 The relatively compact box is roughly the size of two phablets stacked on top of each other, just a tad thicker at 25mm. It weighs 200g, which doesn’t sound like a lot for a dual-driver speaker with an integrated battery. 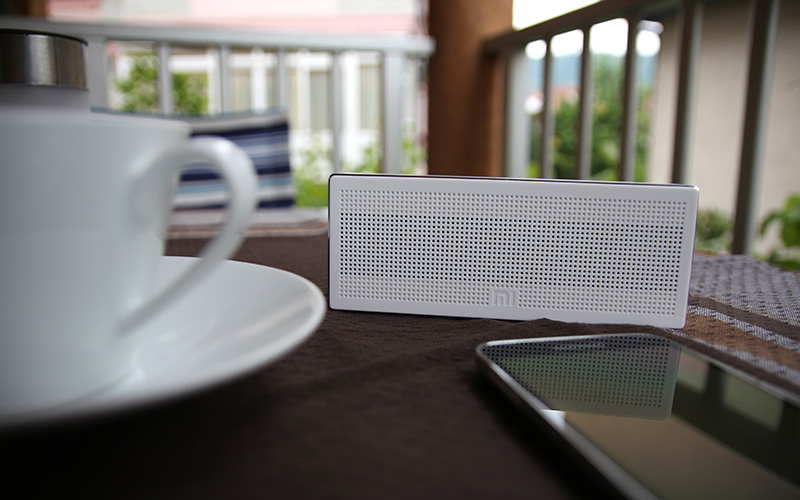 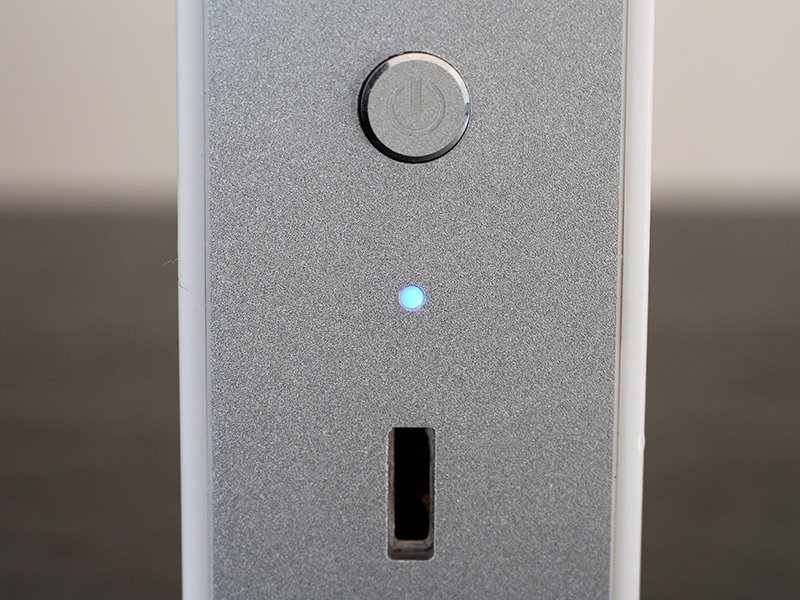 The device is charged via a standard micro USB port. This is a “passive” Bluetooth speaker, there are no controls on the unit, so you’ll have to control playback via your phone. It’s a pity Xiaomi didn’t include a standard 3.5mm line in on the device, since it could have proven useful in some situations.

Apart from the power button, USB port and activity LED, there's nothing on the chassis, except two rubber feet at the bottom. 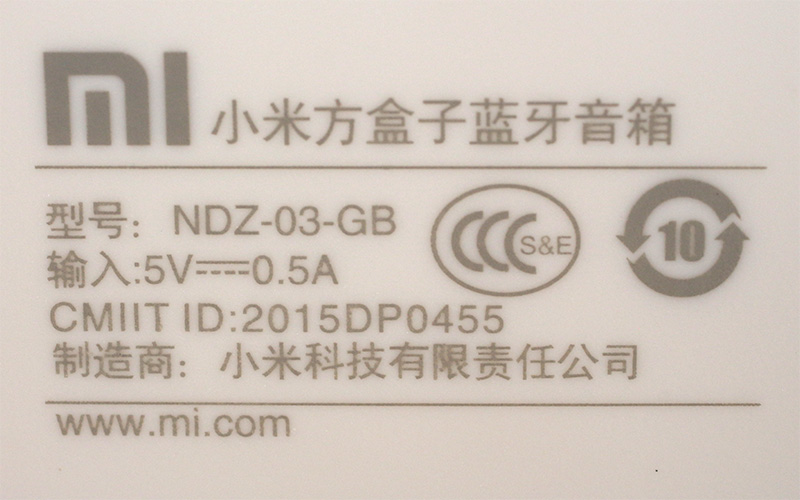 Two tiny 1.8W drivers might not sound like much on paper, but given the compact design and portable nature of the device, they offer quite a lot. In fact, the vast majority of cheap Bluetooth speakers ship with a single 2W driver (or 3W if you’re lucky), so getting two 1.8W units for roughly the same money sounds good, pardon the pun. 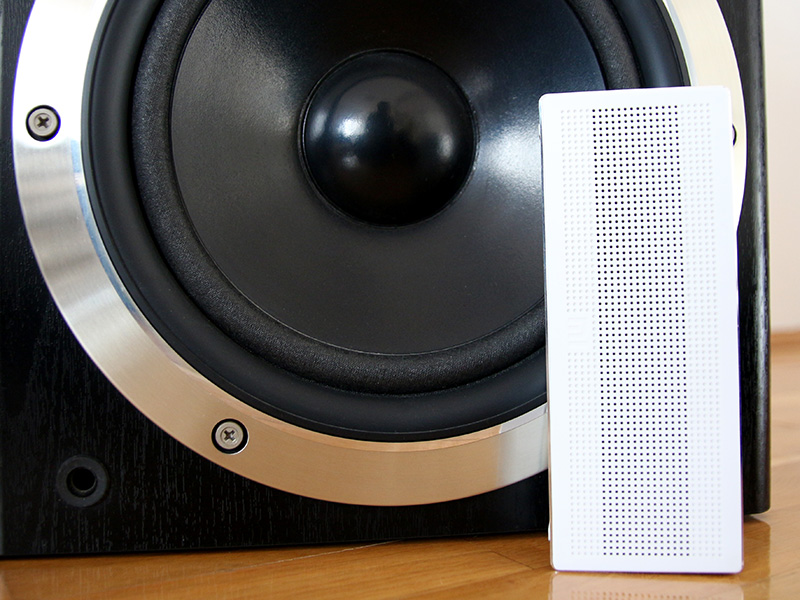 The fact that the speaker can reproduce both channels independently, without having to convert stereo to mono, is the big difference here. The Xiaomi boombox isn’t much bigger than your average one-driver Bluetooth speaker, and it doesn’t cost much more, either.

So what about the audio quality?

The drivers are powerful enough to fill a small to medium room, and despite their relatively low nominal power, bass output is quite good. The sturdy and heavy chassis also helps keep vibrations to a minimum, so there are no nasty surprises when you crank it up.

Considering the fact that this is a $25 product with two tiny drivers, we must admit we were surprised (and impressed) by the audio quality. There’s no secret – you are really getting two 1.8W drivers, which usually isn’t the case on inexpensive devices with questionable specs. 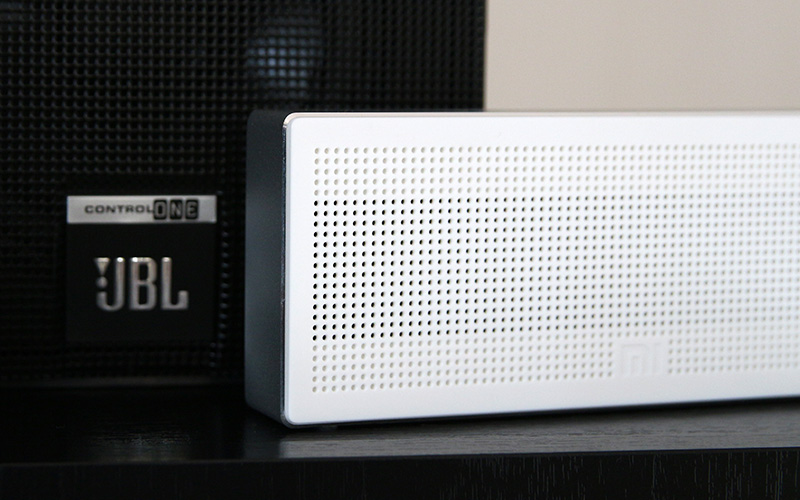 We compared the Bluetooth boombox to a couple of traditional Logitech and Genius PC speakers and can report that audio quality is not an issue. However, since these are wired speakers with much more powerful drivers, they can obviously beat the Xiaomi in a shouting match. It offered vastly superior quality than a pair of USB-powered Canyon speakers, rated at 2x3W.

The Xiaomi is more than powerful enough to enjoy music or video in an average room. It might not be as loud as your TV speakers, but it’s good enough for most scenarios. If you happen to own a Philips TV, it’s probably better than the integrated speakers. (Still didn’t get over it, did you? Ed) 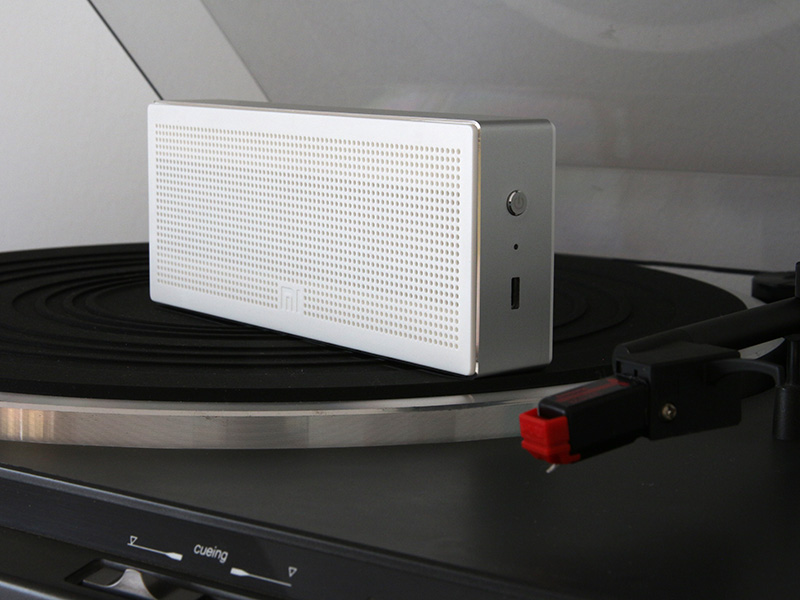 Pitting the tiny Xiaomi speaker against high fidelity gear, like JBL monitors, didn’t make much sense to us, but we did it anyway. While they are obviously not in the same league, the Xiaomi stereo speaker is still good enough unless you really want to crank up the volume. Speaking of which, if Xiaomi ever decides to build a somewhat bigger living room soundbar with a few extra features, it could have a winner on its hands.

The only trouble with pushing the tiny Xiaomi boombox to its limits is the fact that it can move around if you pump up the volume, especially when there’s a lot of bass involved. Obviously, this also depends on the surface.

Like we pointed out, the new Xiaomi “square box” speaker is a passive design, so there are no playback of volume controls on the device. There is no microphone, either.

This was not the case with earlier Xiaomi speakers, which featured clever playback controls and an integrated microphones, so they could be used to pause playback, skip songs, or take calls. Obviously this limits functionality, but the upside is that it keeps manufacturing costs down.

If you want a simple Bluetooth speaker, with no microphone or playback controls, the new stereo unit is the one to go for. However, if you like to have more control over your device, or plan to use it for occasional voice calls or Skype meetings, the single-driver models are obviously a better choice.

This is obviously Xiaomi’s way of diversifying its accessory portfolio – in addition to compact speakers, with on-board controls, voice call support and NFC in some models, the company is now offering a minimalistic design with an emphasis on audio quality. There are no bells and whistles, this time around Xiaomi just wanted to build a stereo speaker at a good price point.

The 1200mAh battery is not user-replaceable. It should suffice for upwards of 8 hours of playback (Xiaomi claims 10 hours, which should be possible if you don’t push it too hard). The battery could have been a tad bigger, but Xiaomi obviously decided to go for a somewhat smaller unit to keep the weight and size down to a minimum. Xiaomi’s one-driver Bluetooth speakers feature a 2000mAh battery. In any case, battery life should not be much of an issue – it’s good enough.

To be honest, the new Xiaomi speaker puzzled us when we first saw it in early April. It looked like a bigger and more serious unit than the company’s mono speakers, but as soon as we got a chance to see the spec, we realised that it lacks NFC, voice support, and on-board controls. However, that was sort of the point – Xiaomi decided to keep it simple and affordable.

In case you want a speaker that can double as a Bluetooth voice unit, or can control playback at the click of a button, you can still get one of Xiaomi’s mono speakers. However, if you want the best bang for your buck and don’t plan to use your wireless speaker for voice calls, you are probably better off with the new, stereo version. 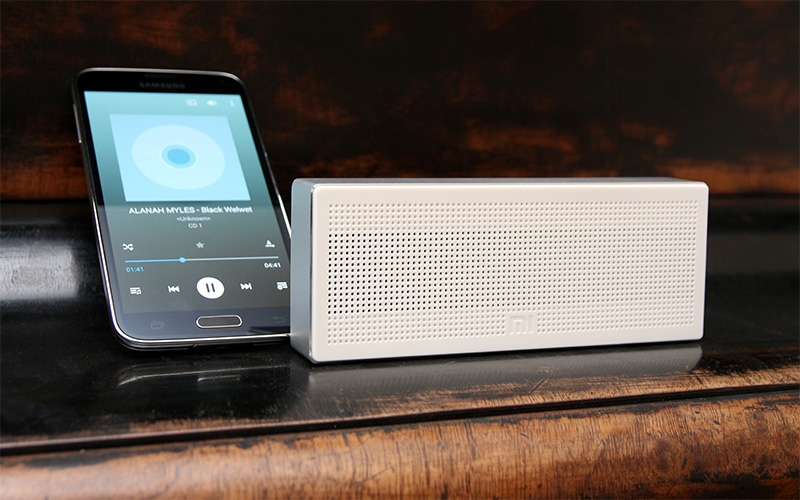 As far as the competition goes, there are a few relatively fresh 2x2W and 2x3W Bluetooth speakers from accessory brands like Rapoo, Audiovox, Denver, Razer, Edifier and others. Most of them feature two 3W drivers, but the trouble is that they tend to cost 50-100% more than the Xiaomi box, and most of them are twice as big, or even bigger. In our book, this means the new Xiaomi stereo Bluetooth speaker is in a league of its own, as these devices can hardly be viewed as direct competitors.

With that in mind, we have no trouble recommending the new Xiaomi to anyone looking for a compact stereo speaker box on a budget. At $25 with free shipping, it’s a very good deal.