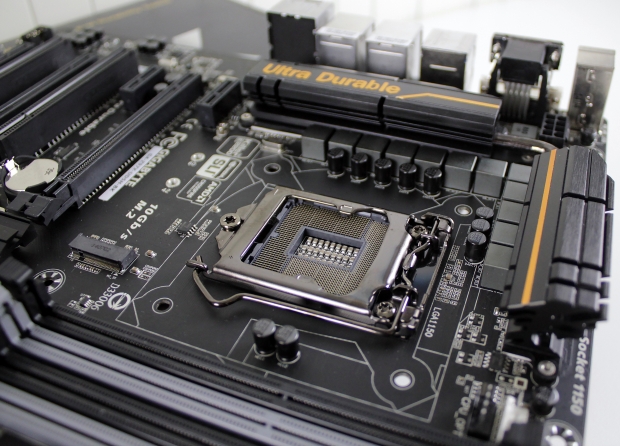 The Gigabyte Z97X-UD5H-BK Black Edition motherboard is aimed at the upper-mid range market. It is an LGA 1150 board based on Intel’s Z97 chipset. Of course, owners of 4th generation Core (Haswell) desktop processors can use their workhorses inside on Z97 motherboards. The new 5th generation Core (Broadwell) CPUs is also supported.

Note that the 9-series chipset has two versions - the Z97 is tailored towards enthusiasts and gamers, while the H97 aims at business and general purpose desktops. Gigabyte offers an incredible 26 different models based on the Z97 chipset.

Our test sample, the Z97X-UD5H-BK Black Edition, offers the M.2 onboard interface (for thin and narrow M.2 SSD drives) that provides extra bandwidth (it tops out at 1GB per second). This is possible due to native PCIe-based storage, but be careful, not all Z97 motherboards come with an M.2 interface. Also SATA Express drives are supported, although the drives are not available yet, but the new standard promises twice the bandwidth of M.2. Both new storage interfaces use multiple PCI Express lanes as a pure PCI Express connection to the storage device.

The Z97X-UD5H-BK Black Edition is listed online as a part of the UltraDurable series. As a Black Edition product, it was subjected to extended server level 168-hour durability tests and is backed by 5-years warranty. 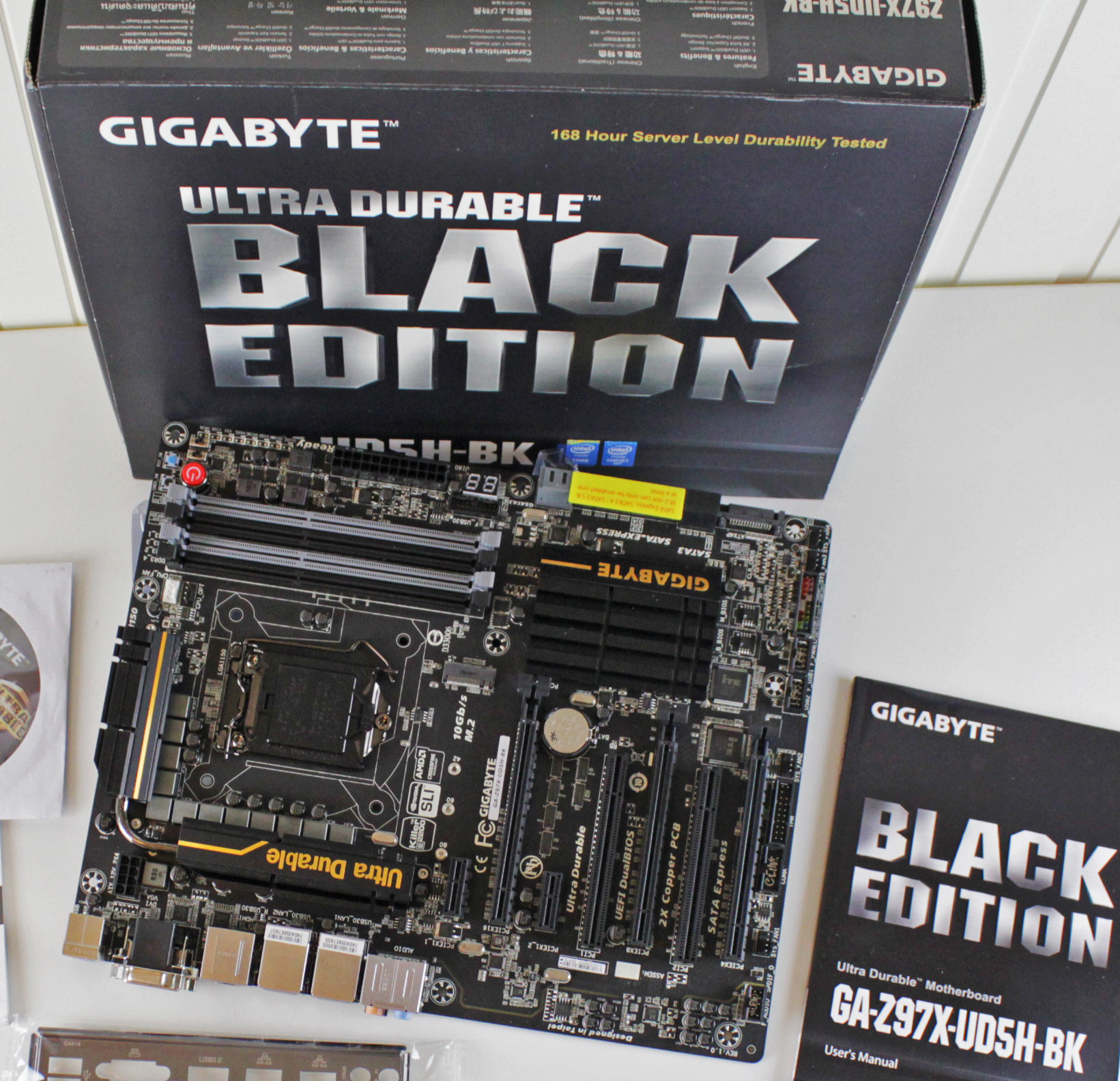 - 1x PCI Express x16 slot, running at x16 (PCIEX16)
* For optimum performance, if only one PCI Express graphics card is to be installed, be sure to install it in the PCIEX16 slot.


The GA-Z97X-UD5H-BK motherboard comes in a nice black package, with a transparent window providing a nice view of the motherboard, which is a nice touch for retail. Plenty of descriptions and specs cannot fully satisfy the discerning shopper, a peek inside the box always helps.

The GA-Z97X-UD5H-BK motherboard comes with three video connectors, one HDMI connector, one DVI-D connector and one D-Sub connector. In the box you will find: 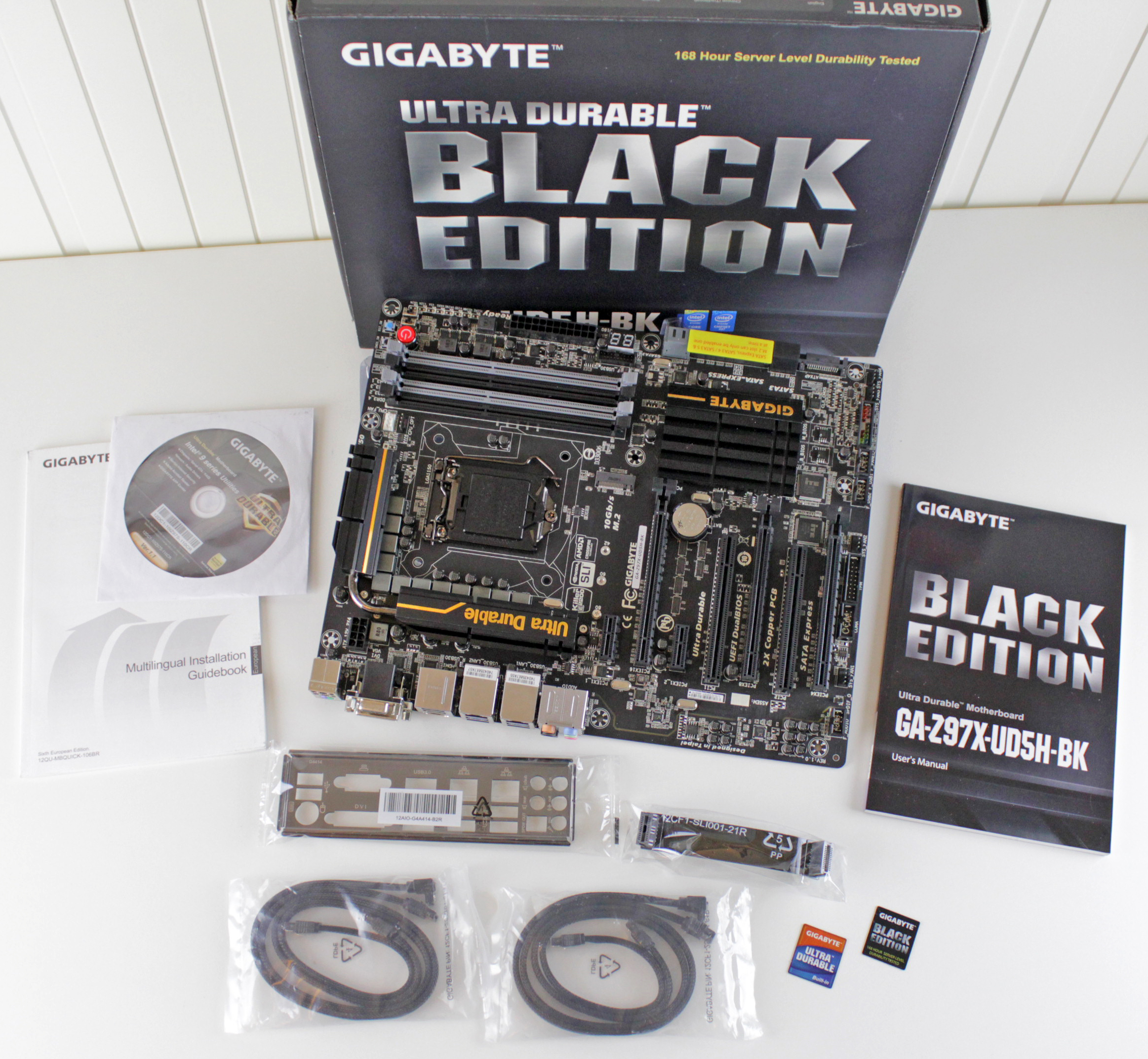 The Gigabyte Z97X-UD5H-BK Black Edition uses a black and gold color scheme which is good if you like classic designs. There is not a lot of gold coloured components, which is good – for example the Z97X-UD5H (non-black edition) features a gold heatsink which is a bit too much. Humidity protection is ensured thanks to the glass fabric PCB. ESD protection is on board, along with, anti-surge support, and short circuit protection. 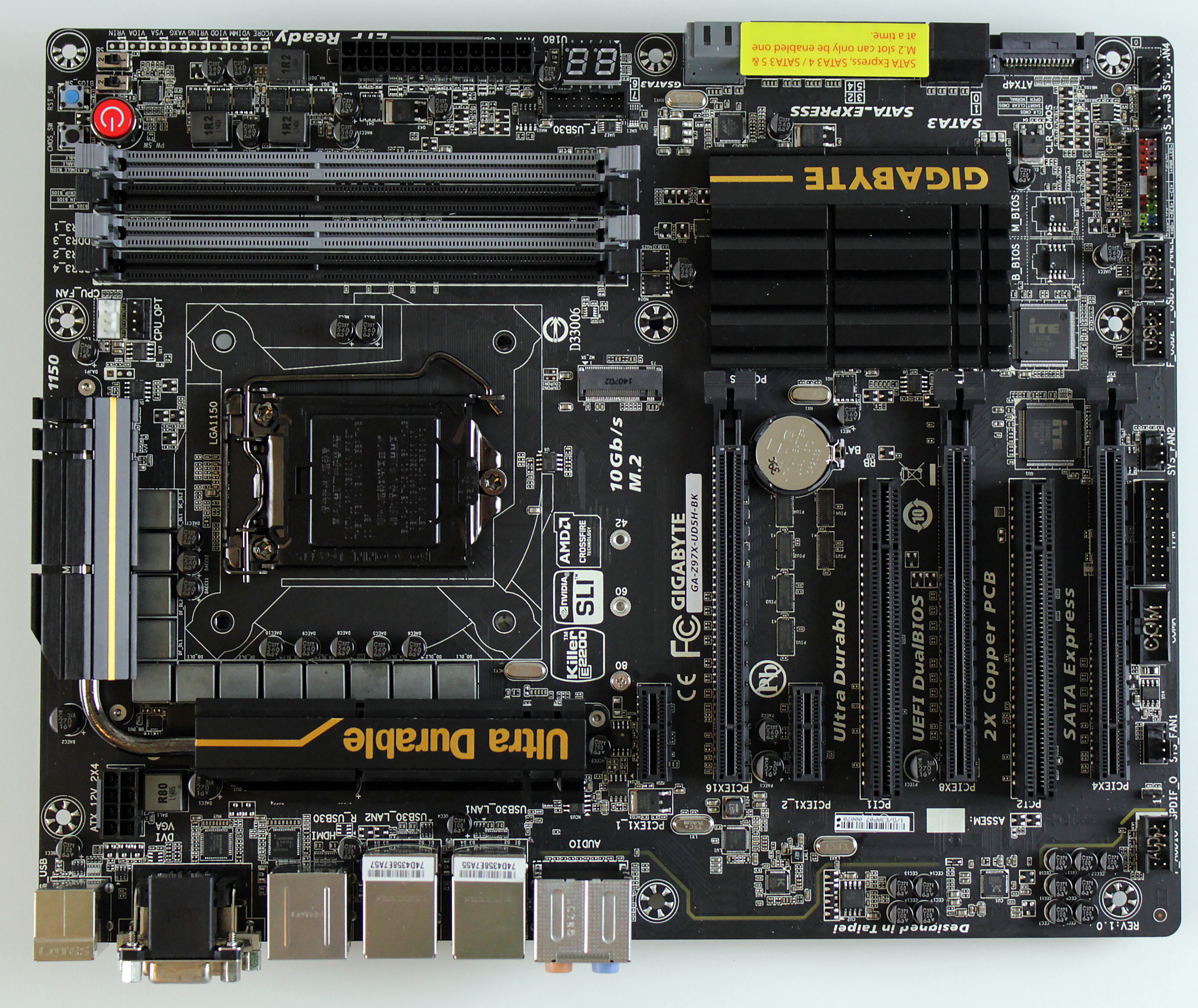 Altogether six fan headers are provided, including four system fan headers, one 3-pin and three 4-pin. Unfortunately they are all placed along the motherboard’s bottom edge. One should have been located near the rear chassis fan and one next to the 24-pin connector. Two 4-pin PWM headers are good choice for the CPU.

Next to the socket you will also find two International Rectifiers 3570A and 3598 controllers designed to control and operate the power delivery system and voltage regulation. Two low profile heatsinks are used to cool the motherboard’s MOSFETs, and are connected via one heatpipe. The M.2 connector is well positioned, between the CPU socket and upper PCIe expansion slot. 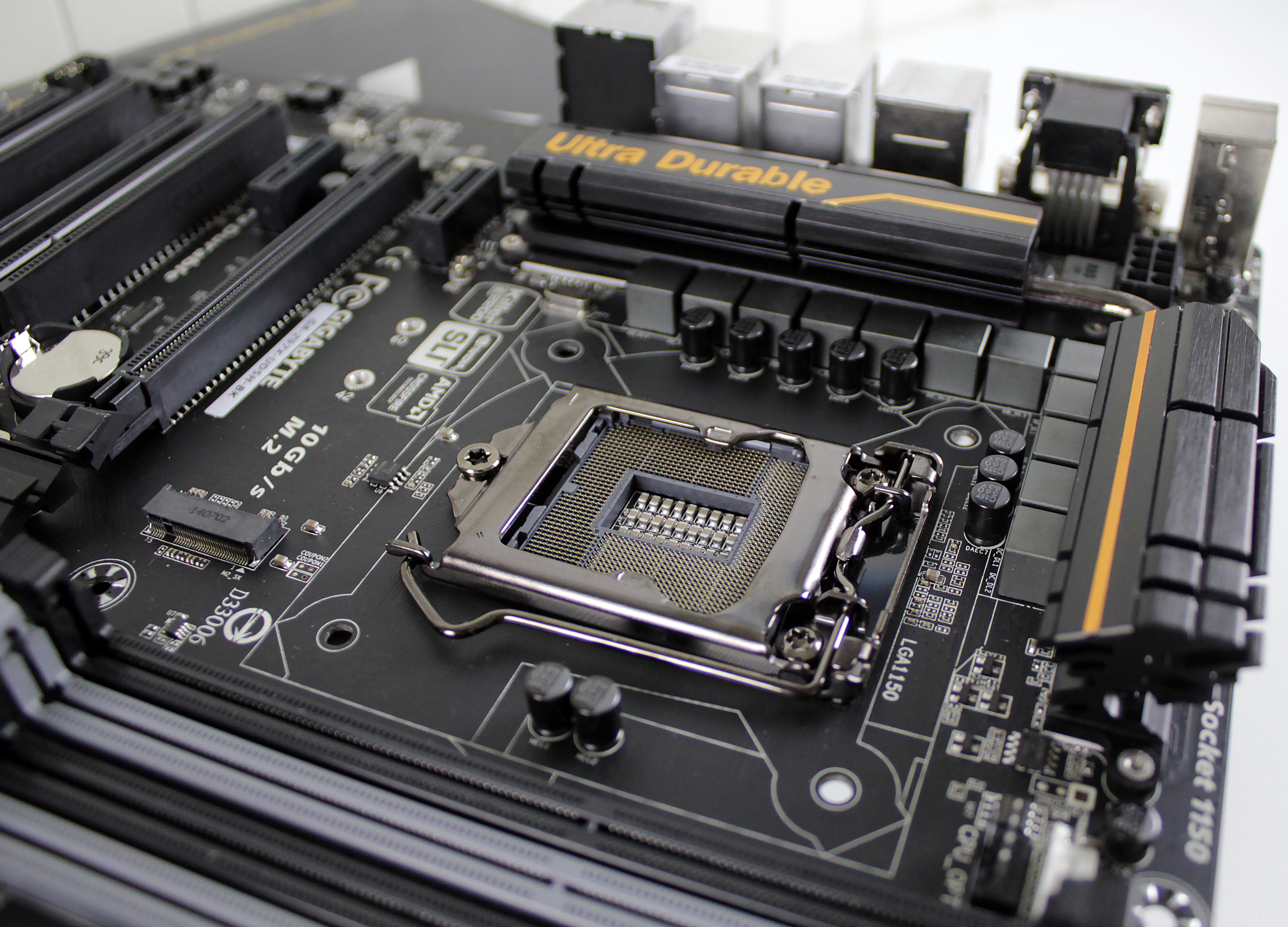 The user can install up to 32GB of memory in four dual-channel slots. According to the official spec, the top memory speed is 1600MHz (as with most Haswell generation parts). However, unofficial support should extend to faster modules, including 3200MHz modules.

The upper right corner is home to the oversized on/off button, as well as clear CMOS and restart buttons. The dual BIOS offers robust durability and redundancy. Using the two BIOS switches, it is possible to choose single or dual BIOS mode. This has been a common feature on Gigabyte motherboards for years and it can come in very handy indeed.

The location of the debug LED leaves much to be desired, because it can be obscured by the USB 3.0 header located right next to the display.

The audio subsystem is improved thanks to the Texas Instruments N5532 amplifier, the Realtek ALC1150 part and signal filtering through a series of capacitors and a discrete PCB layer. 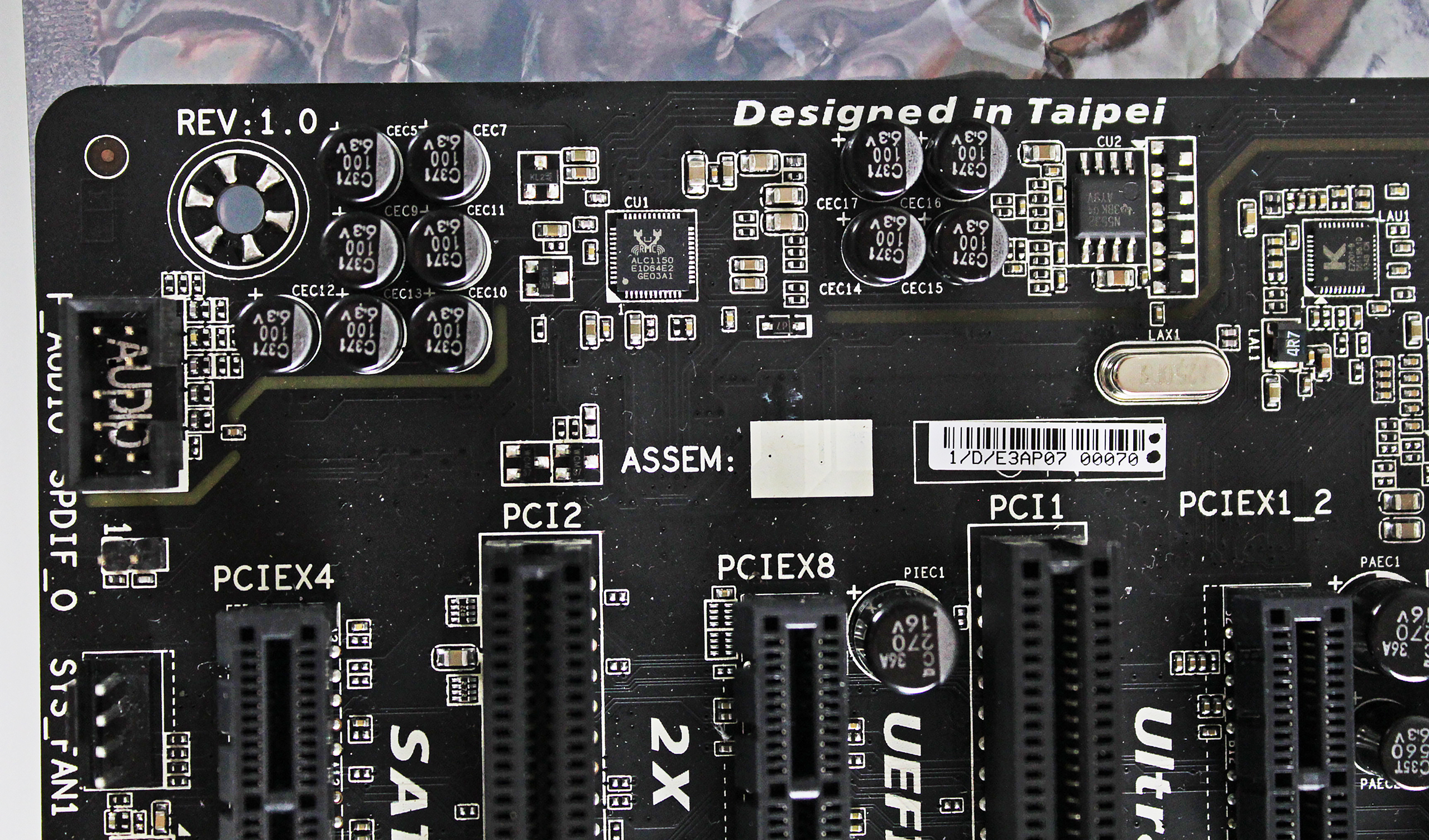 Although the board features three x16 slots, 3-way CrossFire is supported in a x8/x4/x4 configuration, while Nvidia users can build 2-way SLI rigs (since SLI requires PCI x8 connections). The layout should accommodate two triple-slot cards at x8/x8 bandwidth. Note the lack of a PLX chip. The two legacy PCI slots are really not necessary on this sort of product. The Z97 chipset provides six SATA 6Gbps connectors, with a further two ports provided by an add-on Marvell controller. The SATA Express connector is located in front of the chipset.

Bear in mind that you cannot use the M.2 slot alongside a SATA Express connection, more precisely SATA ports 5 and 6. This is made clear by a sticker visible on the next image.

The rear video connectors are fed through the ASMedia ASM1442K and NXP PTN3360DBS chips. 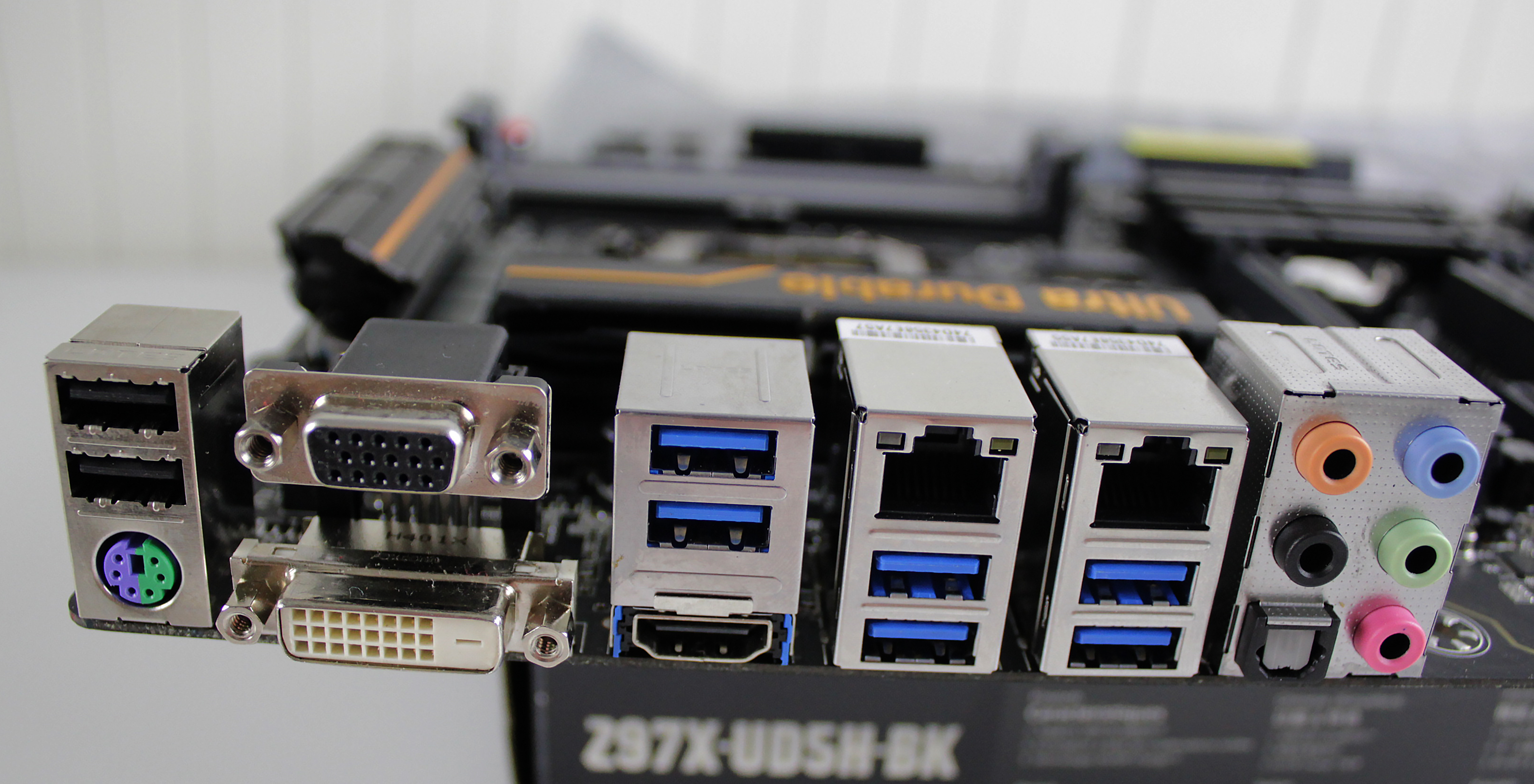 The Gigabyte Z97X-UD5H-BK Black Edition is tested in Gigabyte facilities for stability and reliability. We will not run any ‘altcoin’ (litecoin) cryptocurrency mining software as Gigabyte does when it tests its motherboards prior to shipment. Each motherboard has to pass a seven-day test at Gigabyte.

We will stick to more common tests. The Intel Core i7 4770K processor used in the review worked at a constant clock of 3.9GHz due to forced Turbo. When XMP is enabled, BIOS applies multi-core turbo and forces the CPU to a constant frequency of 3.9GHz. The results related to the PCIe based M.2 storage interface will be added later (we are waiting for the new drive to come). 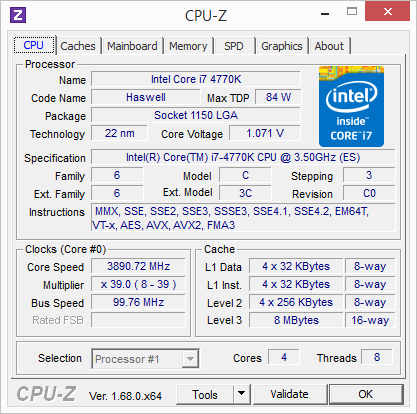 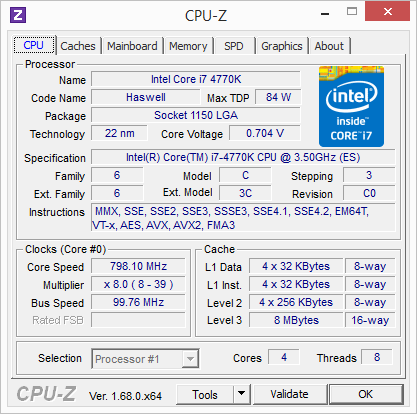 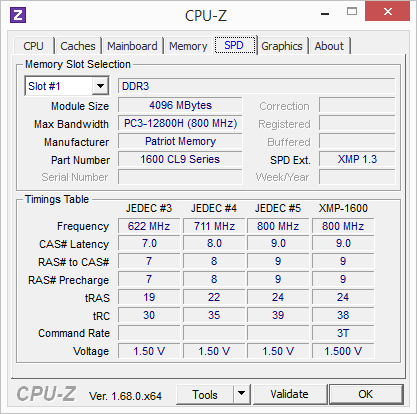 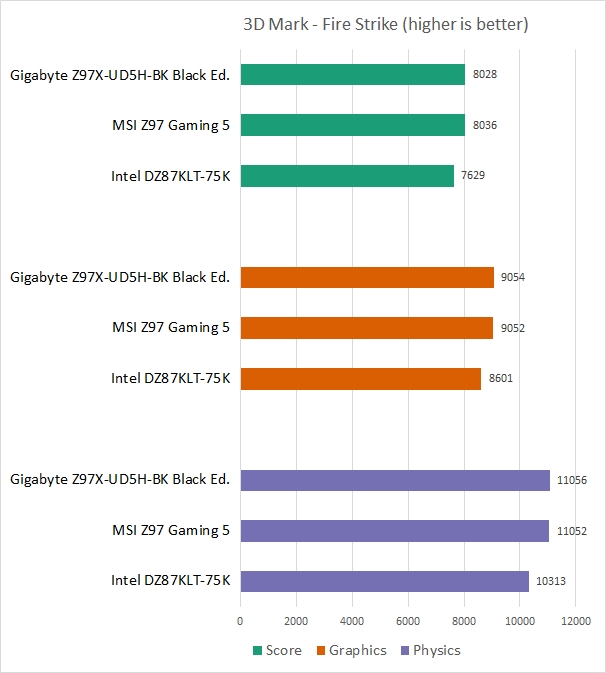 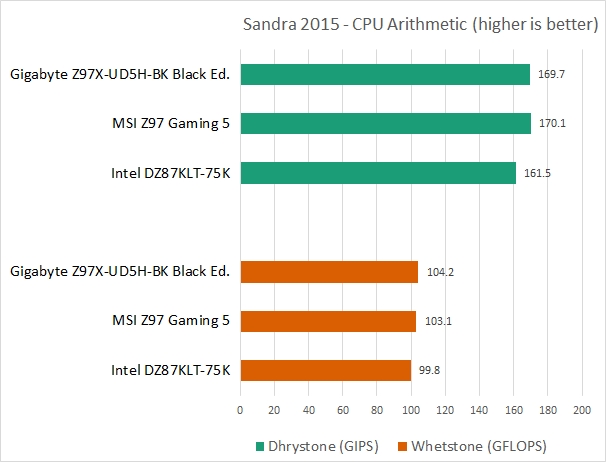 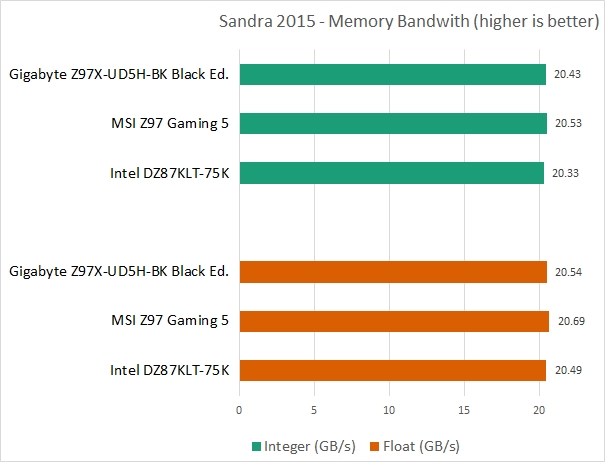 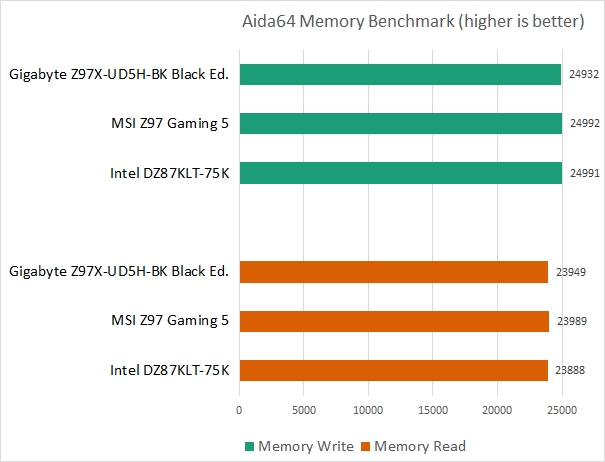 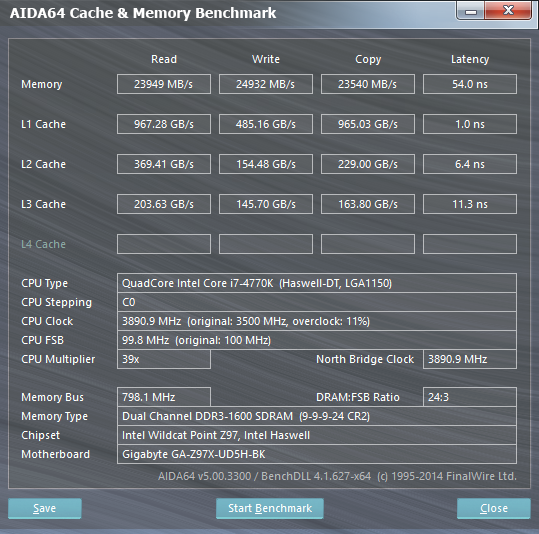 The next set of graphs shows iGPU performance (the Sapphire R9 280X Toxic card was removed during these tests). The Gigabyte Z97X-UD5H-BK Black Edition features three video outs, and all outputs can be used at the same time.

When it comes to Haswell, the on-die GPU is a lot more potent than in previous generations. Results indicate that it can provide enough performance for 1680x1050 gaming in many titles, although more demanding ones will have to be taken down a notch to 720p. This is still not bad for an integrated design.

We used the traditional approach and tried overclocking the system by changing BIOS settings, using the legacy BIOS (which is easier to navigate than UEFI). Gigabyte also continues to offer its EasyTune (ET) software which allows users to view and adjust voltages, frequency, and other overclocking-related settings, as well to monitor vital parameters within the Windows environment.

For proper overclocking you will mostly be looking at the Advanced CPU OC, Advanced DDR OC and 3D Power windows from which you can manually control frequencies and voltages.

We bumped up the CPU clock to 4.5GHz by changing the CPU voltage to 1.26V and multiplier settings (45x on the frequency page).

In case you want to try the ‘Performance Upgrade’ feature, which is an automatic OC feature built into the motherboard’s UEFI, bear in mind that the applied voltages tend to be high, ranging from 1.35v to 1.42v – which is a tad too much for us and our CPU.

The consumption figures are in line with the competition. Overclocking adds a few more watts to the bill, but Gigabyte did a good job with the power delivery system, so overclocking does not result in a huge power consumption increase. 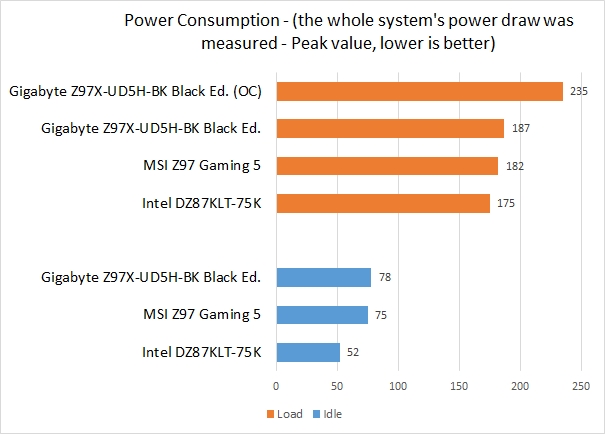 The Gigabyte Z97X-UD5H-BK Black Edition delivers an excellent out-of-the box user experience which comes as no surprise and the Black Edition series is designed to be stable and reliable.

The motherboard did just that – it remained stable throughout our test routine, including overclocking. This feature packed board offers a bit more value for money than its predecessors, which is also a plus.

Owners of Gigabyte’s Black Edition motherboards are encouraged to join the Black Edition Members’ Club and membership extends the warranty on Black Edition boards to five years. Gigabyte is currently offering another promotion that offers members a free upgrade in three years (see more about “Take One Get Two” promotion here).

Guaranteed reliability and durability will cost you about €175. If you are looking for a Z97 chipset based motherboard, we can recommend the Z97X-UD5H-BK Black Edition, not only if you upgrading, but also for building a new system from scratch, as the board supports new Devil’s Canyon parts and will support Broadwell desktop chips once they start shipping.