Review: Mechanical is the way to go


We got a chance to get our hands on one of the first samples of Cooler Master's CM Storm Trigger gaming keyboards and honestly, we did not know what to expect from a mechanical keyboard. The CM Storm Trigger was certainly promising a lot with top-grade Cherry MX Black switches and it is one of the first gaming keyboards done by Cooler Master's CM Storm department.

Over the last couple of months, Cooler Master's CM Storm department has launched a new line of gaming keyboards that includes a compact PS2 QuickFire Rapid that is aimed at gamers on the move, QuickFire Pro that is pretty much a vanilla version of the Trigger, a top of the line full size, fully lit, gaming keyboard with Cherry MX Black switches.

The design of the entire series is something that we're reluctant to comment as this varies from person to person - some like those flashy glossy keyboards and some like their keyboards to be simple. Cooler Master's CM Storm Trigger is one of those keyboards that keep things as simple as possible and has, sort of, military feel to it. With a large rubber coated wrist rest, subtle full red LED lightning with different modes and level of lightning, top grade Cherry MX switches, 18k gold plated USB plugs with braded cable, five macro keys with 64KB on-board memory for profile storage, anti-ghosting 6-key rollover. 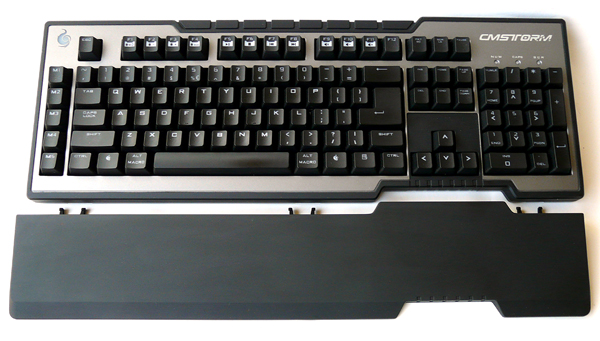 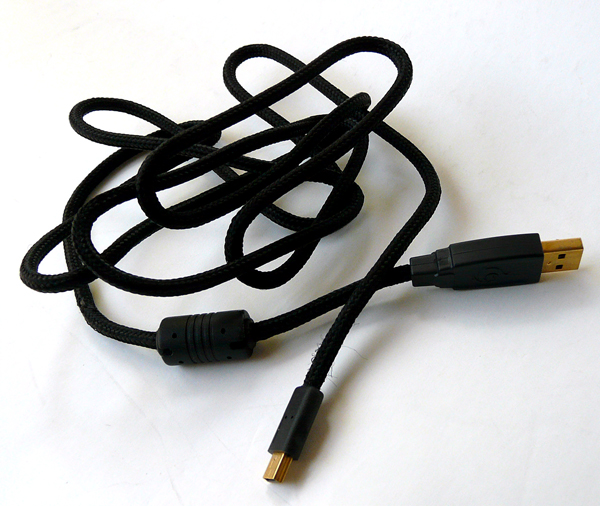 We briefly mentioned the MX Cherry Black switches but actually the Trigger ships with all four different Cherry MX switches. These include black, blue, red and brown, depending on the SKU, but we will get to that a bit later.

The CM Storm Trigger measures 475(L)x162(W)x25(H) mm (18.7(L)x6.5(W)x0.98(H) inch) and weighs in at hefty 1260g (2.78lbs). The weight actually comes in handy, since it prevents the keyboard from sliding all over the place in those long gaming sessions. The build quality is quite impressive as well and although we are looking at a plastic keyboard, the Trigger is as sturdy as it can be with no squeaking and bending whatsoever. 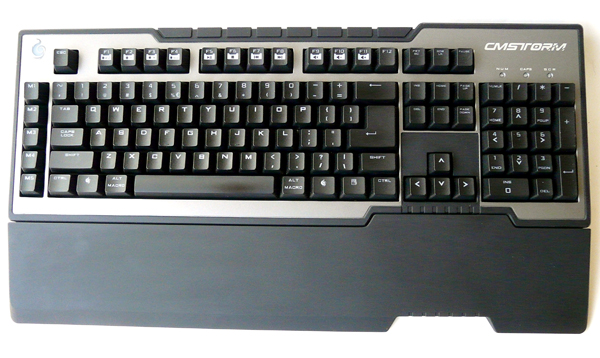 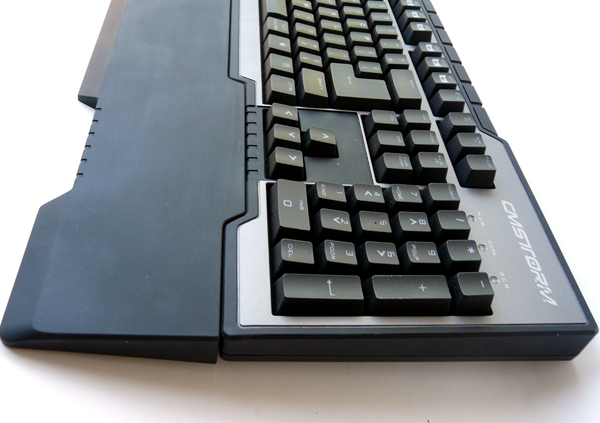 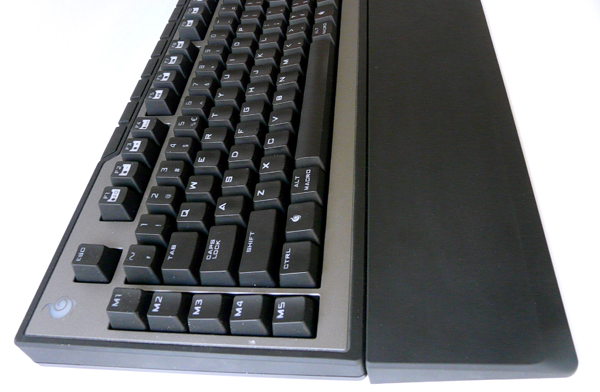 The bottom is rather plain looking and features six rubber stands as well as two rubber legs in case you prefer your keyboard to be positioned at an angle. The wrist rest is quite easily attached and held by three plastic clips. Unfortunately, removal is a bit trickier as we were honestly afraid to break them but luckily, they are sturdier than they look. 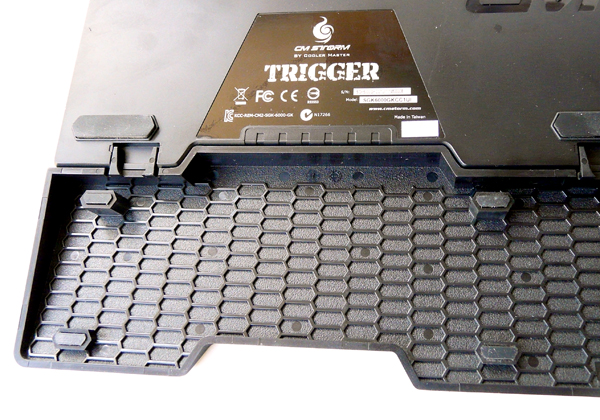 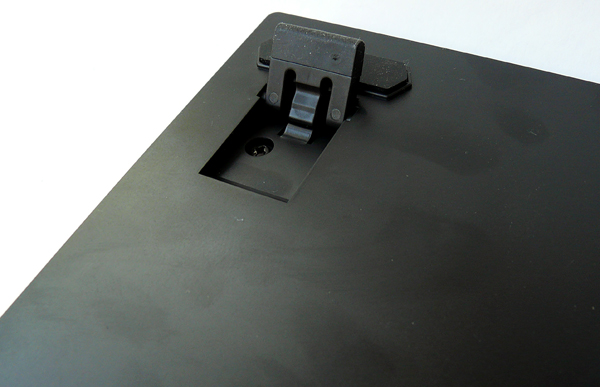 As far as the design goes, CM Storm Trigger uses a simple grey/black color scheme with red LED backlight. The layout is pretty good but since it actually depends on the region, it is pretty much pointless to talk about it. As a matter of fact, our sample came with US layout and we were quite happy about it, especially considering that all our previous keyboards used the same layout. While we're sure we'd get used to another layout, who wants to do that, eh? The CM Storm Trigger uses a font that we found much better than what we see on other keyboards. It looks cool and it is easier to read even in dark with backlight enabled.

The media keys, or rather media shortcuts, are placed on F1 to F11 keys while the five macro key are set on the left side.

The red LED lightning (something that is quite hard to photograph) is quite weird, at least until you take off the key and see what is below. To be quite honest we like it, since using Cherry MX key switches meant that LEDs were placed behind it, thus preventing it to light up the lower part of the key and functions accessed by “shift + key”. 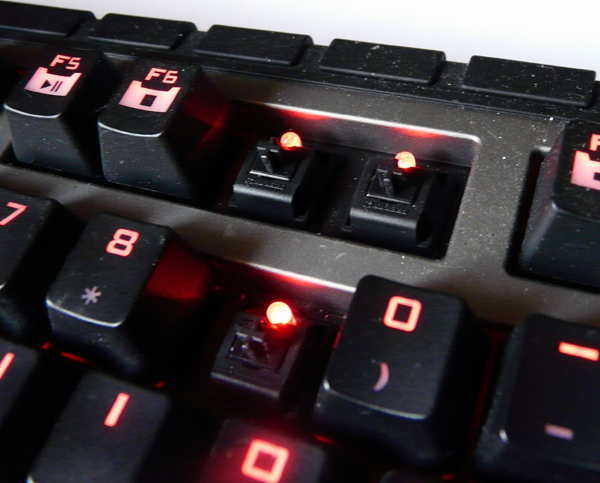 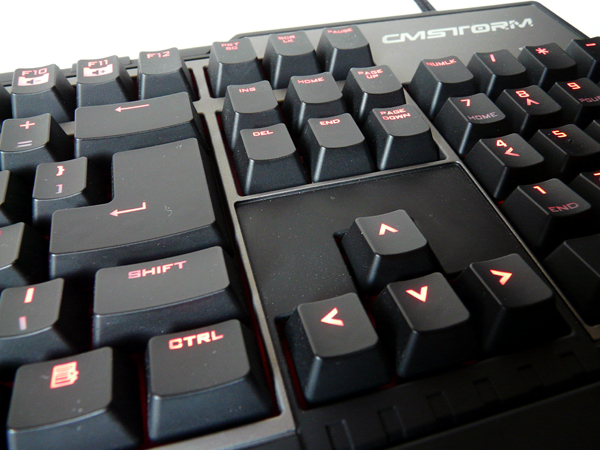 The last but not least is a “gaming mode” that shuts all LEDs except those under the logo, macro keys, WASD cluster, arrow keys and of course NUM, CAPS and SCR lock LEDs. 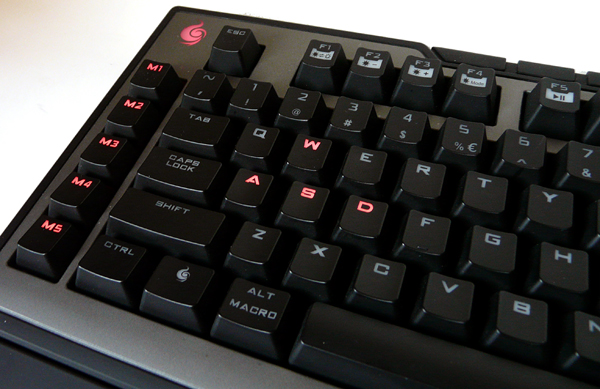 In both fully lit and gaming modes, you can adjust the level of lightning. The three levels available out-of-the box are separated pretty good and you can see the difference between fully dimmed and pushed to the maximum.

You might have noticed that we said “three levels available out-of-the box” as, in addition to USB hub and USB 2.0 port for keyboard, Trigger also features a DC 5V input. When paired up with a standard DC adapter (not included in the box), this one allows for additional two more levels of brightness as well as an ability to support power hungry USB flash drives and HDDs, in case you want to use them with Trigger’s USB hub. 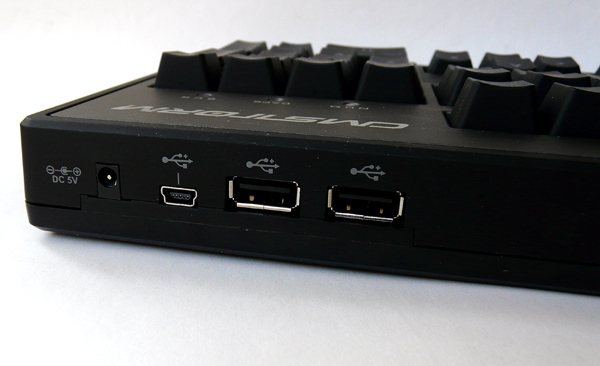 Our Trigger came in a review sample box but CM was more than kind to supply us with a picture of the actual box, in case you're planning on getting your hands on the Trigger. 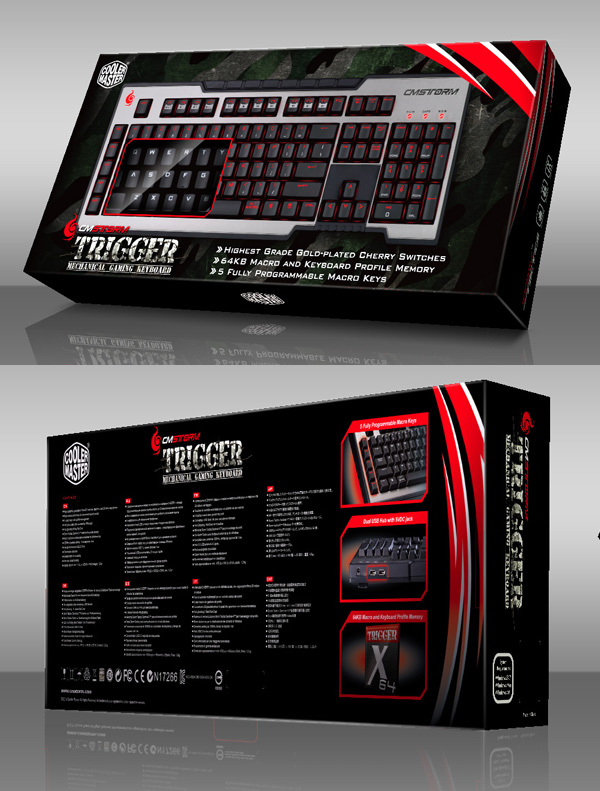 We already briefly mentioned that the CM Storm Trigger will ship with all four different versions of Cherry MX mechanical switches, and we were lucky to get the one with Black version - the creme of the crop when it comes to mechanical switches.

There are actually quite a few differences between those four different versions of Cherry MX switches. Cherry MX Brown switches are considered middle ground between typing and "gaming" switches. They have a light, tactile feel half way through the key press that lets you know the switch has activated. Cherry MX Blue switches are the best for typing. The tactile bump can easily be felt, and the resistance is similar to your average keyboard. Cherry MX-Red's are another switch that can be considered a "gaming" switch. It's essentially a lighter version of the MX Black, requiring less force to actuate.

The last but not least are the Cherry MX Black switches that are linear (non-tactile) switches and are considered one of the best switch types for gaming. They are described as switches that have high actuation force and are not prone, or rather immune, to accidental key presses.

Mechanical keyboards are becoming quite popular these days. Although we were quite skeptical when it comes to actual typing, which is naturally a big deal considering our line of work, the mechanical switches are not that uncomfortable at all, quite the other way around. 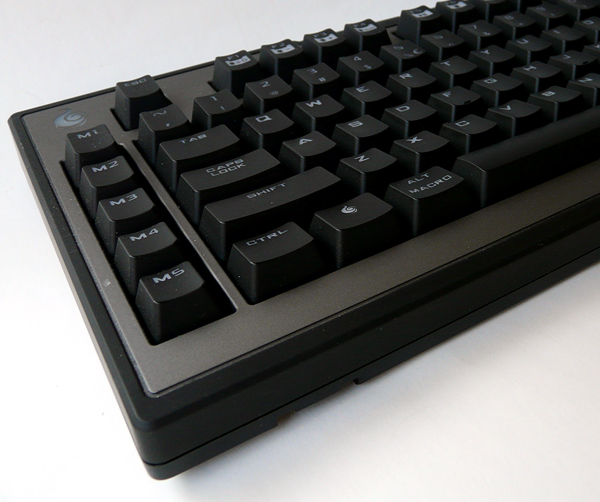 Of course, this is also matter of preference as you either like your keyboard to be soft and silent or provide an audible sound that we actually missed on our previous keyboards, and put a certain feedback on your fingers when you press the key. To be quite honest we tend to describe the Trigger as the keyboard that fights you while you type on it and as weird as it sounds, we liked it, and liked it a lot.

The provided software for the CM Storm Trigger is a bit complicated at first but once you get a hang of it you can get along with it quite fine. It includes macro set-up and profile editing that is stored in keyboard memory. There is also a possibility for on-the-fly macro recording as well. 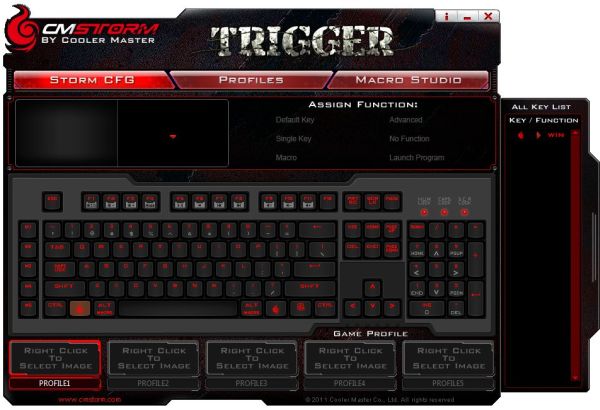 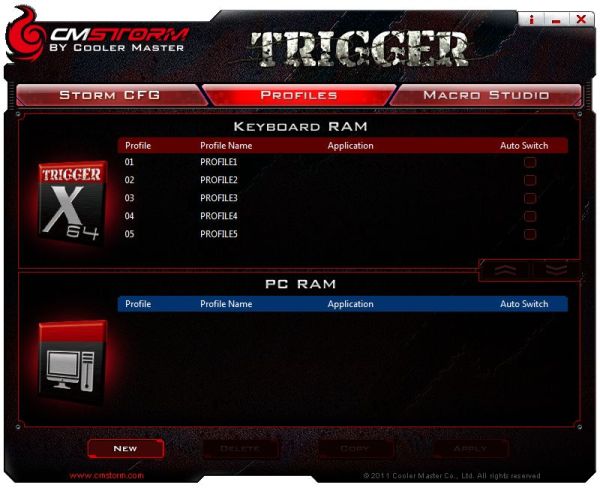 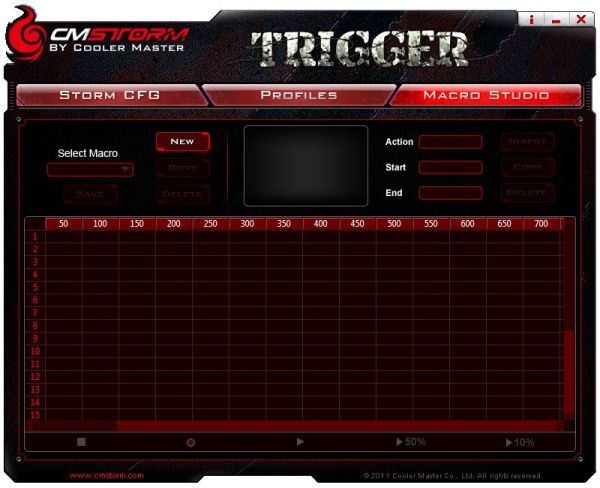 The only thing that we actually did not like is the fact that we received a keyboard with “CM Storm buttons” set to, well, CM Storm, rather than Window key. In case you got used to Windows shortcuts this tends to be a problem. Luckily, it is easily fixable by storing a new button assignment in the CM Storm driver software.

We tried the CM Storm Trigger in various scenarios from light surfing, review and news writing, and gaming, including some of the latest FPS and RTS titles.

When it comes to gaming, the CM Storm performs admirably. Impressive feedback, more than enough 6-key roll-over, and good response time, are just some of the key features that we liked on this keyboard, and full LED backlight is certainly a nice touch for those long night gaming scenarios. We simply did not have any problems with it and it worked like charm.

The typing sessions are a bit different story. The people we asked to try it out said it is too rough for typing but we beg to differ as, although it takes a bit time to get used to it, we tend to like it and our typing sessions were quite an enjoyment. As if happens more often than not with such products, mechanical keyboards are something that you either like or do not, and need time to get used to it.

The price for the Cooler Master Trigger is set at US $119 in the USA, and around €110 in Europe. This is a pretty steep price but we think that it is worth it. There are quite a few mechanical keyboards on the market today and the choice is yours, but CM Storm Trigger certainly deserves a place on that list.

The CM Storm Trigger is certainly a keyboard that can easily impress you with its build quality, set of features and a flare of enjoyment that only a mechanical keyboard can offer. With these in mind, we can easily recommend it without losing a night of sleep over it.