Lenovo’s affordable Ideapad A1 put to the test


A few months ago Amazon and Barnes & Noble introduced two relatively inexpensive 7-inch tablets with rather impressive results. The Kindle Fire is already the best selling Android tablet on the market. Although most manufacturers and consumers alike still stick to the 10-inch form factor, dirt cheap 7-inchers seem to be the flavor of the month.

We got our hands on one of them, and it’s not the Kindle or Nook. Lenovo’s Ideapad A1 was also introduced late last year, but unlike the overhyped Kindle and Nook it got a lukewarm reception. Unlike the competition, the A1 is a run of the mill Android tablet with Android Marketplace and a pretty straightforward Gingerbread UI, with only minor tweaks on top. 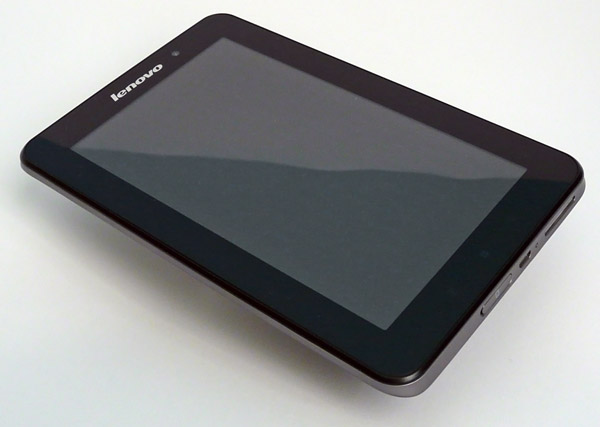 Before we start we need to get something out of the way. The Ideapad A1 sells for €150+, so it is quite a bit cheaper than the competition. Of course, in designing such a cheap device Lenovo had to cut some corners, so there are a few compromises worth mentioning.

It is powered by a Texas Instruments OMAP 3622 chip, a 1GHz Cortex A8 part with PowerVR SGX530 graphics. Not exactly state of the art in this day and age, but it gets the job done. It has 512MB of RAM and 16GB of built-in storage, but it also features a microSD slot for expansion. Basically it has the processor and memory of a previous generation Android smartphone, but it also packs generous storage. 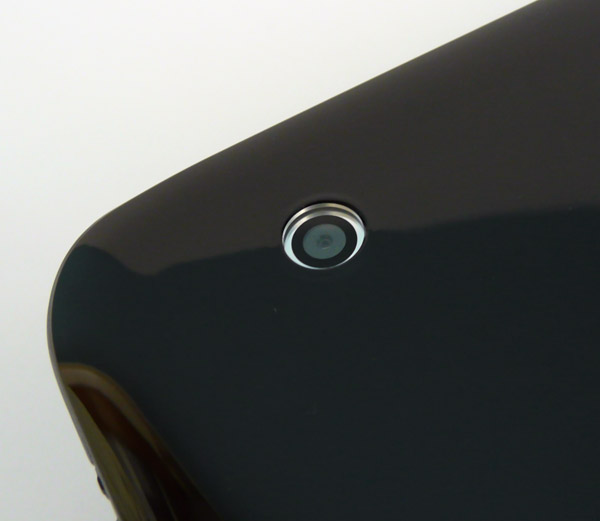 Unlike the Kindle Fire, the A1 has a 3MP camera along with a VGA front facing camera. It also has a volume rocker and rotation lock switch, something the Kindle Fire does without. A proper offline GPS receiver is also on board, so the A1 can double as a pretty good navigation device as well. The capacitive 7-inch 1024x600 screen is the main issue here, but we will get to it later. 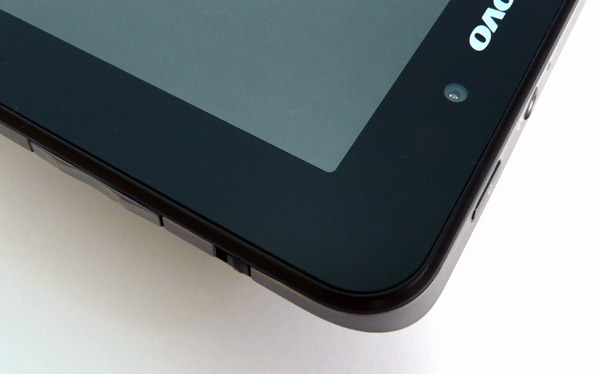 As for the looks, Lenovo is offering the A1 in four colour options: piano black, white, pink and blue. We think the white version is the one to go for. Overall the design is pretty good. It won’t turn heads but it’s pretty sleek, especially if you factor in the price. On the aesthetic side, our only complaint is the size of Lenovo logos, both at the front and at the back. They are just a bit too big for our liking. 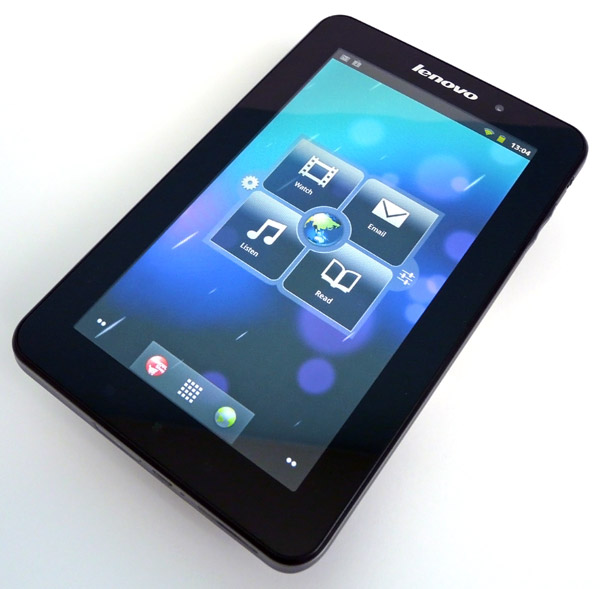 So, Lenovo did not pinch pennies in the design department.

The Ideapad A1 feels like a pretty solid lump of hardware. Build quality is pretty good for such an affordable device. Although there are no fancy materials like magnesium or aluminium, the all-plastic A1 does not look or feel cheap. It measures 195x124x11.7mm and it weighs in at just 400 grams. 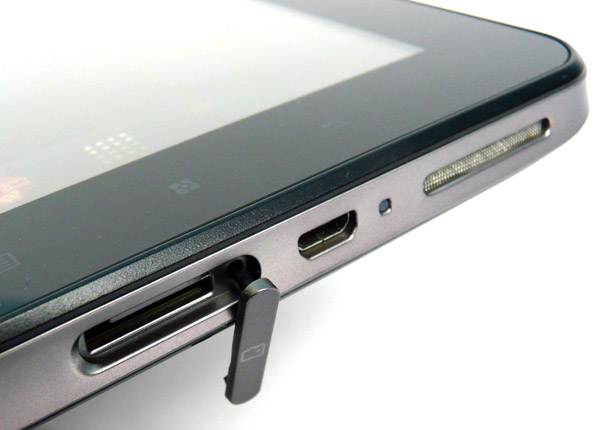 The microSD slot feels a tad flimsy and it is not very easy to access, but in this price range we reckon most users will stick with internal storage anyway.

It would be unfair to compare it to high end tablets, but for €150, the Ideapad A1 looks and feels great.

The A1 ships with a custom preinstalled Go keyboard, which is a tad better than the stock Android 2.3 keyboard, but it is nothing to write home about. Typing in landscape or portrait is a breeze, but this has more to do with the compact 7-inch form factor than the keyboard itself. Of course, the beauty of Android is that you can download any keyboard you like, but the Go keyboard gets the job done. 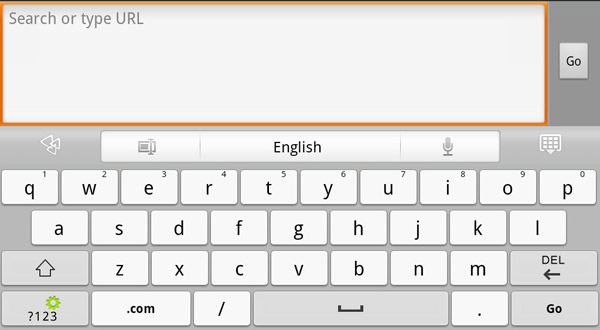 There is no haptic feedback support, not even on the three navigation buttons under the screen. On a separate note, these buttons can be pretty annoying. For some reason the backlight powers down just a couple of seconds after you touch them, rendering them invisible. Of course, with time users will get used to this awkward glitch, but Lenovo should have included some backlight controls for the buttons. [Gods, you have big fingers. Ed]

And now we get to the elephant in the room, the display. Of course, it supports multitouch, but it is limited to two-finger gestures. There is no pinch to zoom in the gallery app, although pinch to zoom works pretty well in the browser. However, our main beef with the screen is not touch input, which worked quite well, but display quality. 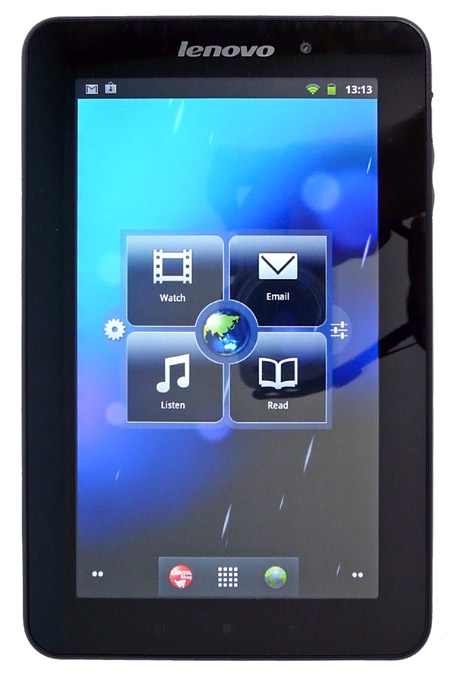 Of course, the A1 does not feature an IPS display like high-end 10-inch tablets and we were not expecting any miracles. The resolution is more than adequate, as it ends up with more pixels per inch than an iPad. We could also overlook relatively low brightness, but the real issue here has more to do with viewing angles than anything else. 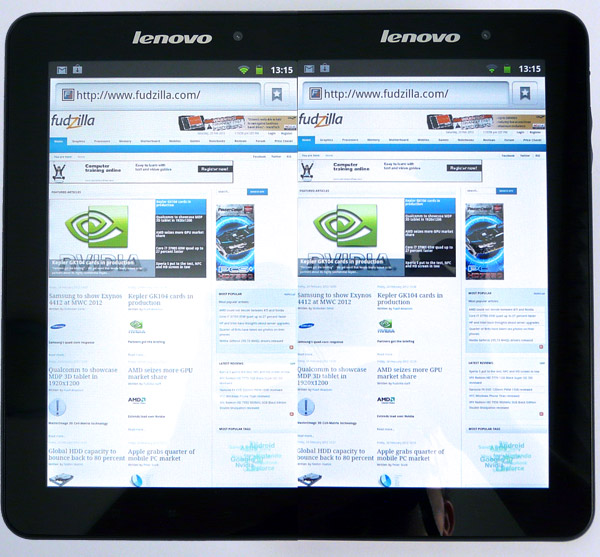 It might be hard to explain what I’m on about, so here’s a photoshopped demonstration. Note the differences in contrast and color rendition between the shots, captured from two different points, less than 10cm apart. Basically it is like a 3D screen done wrong.

It might be a dirt cheap tablet, but Lenovo really should have gone for a better screen.

The layout is pretty straightforward and there is really not much to talk about here.

The right hand side features the volume rocker and screen rotation lock switch. The rocker feels very sturdy and, of course, the rotation lock comes in handy.

The left side features... nothing.

At the bottom you will find a microSD slot, micro USB connector, status LED and single mono speaker. Audio quality is average, the sound is somewhat louder than on a smartphone, but it is barely adequate for i.e. video. This pretty much applies to all tablets.

The power button and a standard 3.5mm headphone jack are on top. There is no HDMI output and there would really be no point in having it. Due to hardware limitations, the A1 can’t play HD content anyway.

The 1GHz A8 processor with SGX530 cannot cope with HD and it is pretty easy to push the small Lenovo to its limits. Bear in mind that we are talking about previous generation hardware, running an equally outdated OS. In spite of its limitations, the A1 still manages to deliver a decent user experience. It will allow you to watch YouTube or any sort of SD video, but it starts dropping frames as soon as you go for 720p, while 1080p is off the table completely. The Android 2.3 browser still does a pretty good job and although it might not deliver the smoothness of last generation dual-core devices, it soldiers on and manages quite well.

Angry Birds run just fine, as do some other games, even Osmos HD and Air Attack HD, which are quite a bit more demanding than Angry Birds. Of course, the A1 does not have enough muscle to run games designed for dual-cores with the latest graphics cores. 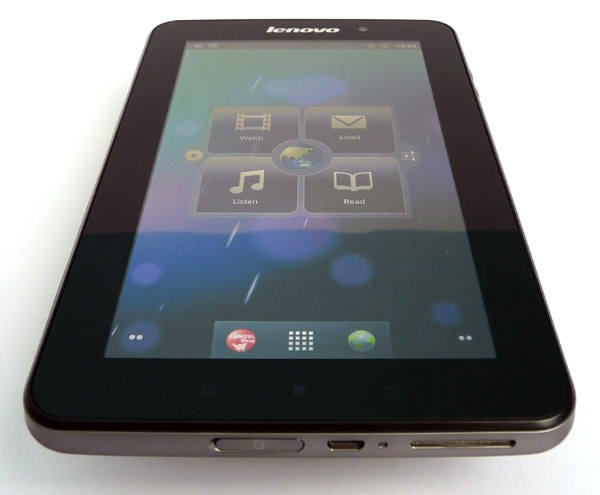 Lenovo did not go overboard with customizations. In fact, aside from the keyboard and huge Lenovo widget at the home screen, it is pretty much a vanilla Gingerbread experience. Installing another launcher can be helpful, and we found that GO Launcher is a tad snappier. Overall, the A1 is not fast, but we wouldn’t call it laggy either.

There is not a lot of bloatware, either. Lenovo ships the A1 with eBuddy, Documents to Go 3, Lenovo Market and a few other apps, including NavDroyd. We have to stress that offline GPS is a redeeming feature as far as we are concerned. You won’t get it even on much pricier tablets, let alone a €150 device. 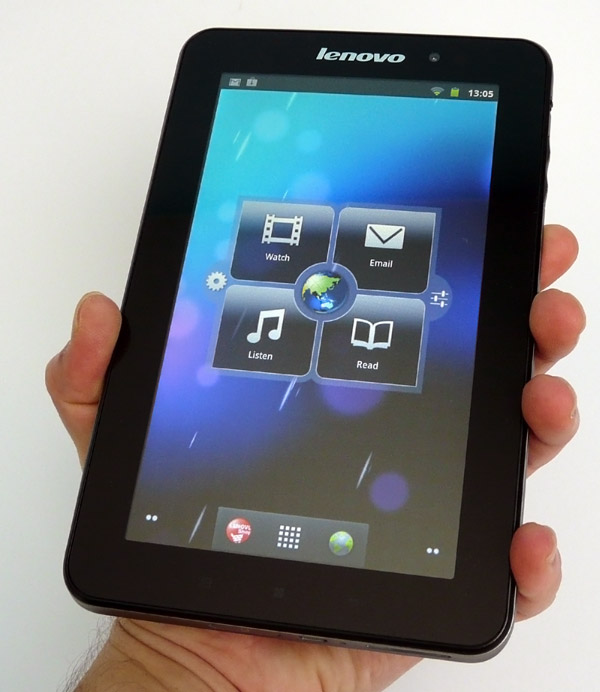 Although 7-inch tablets are often looked down upon as nothing but a cheaper alternative to high end 10-inchers, their compact size and weight can also come in handy. For example, people who consume a lot of e-books might find that a 7-incher is a pretty good choice. They weigh less than 10-inch tablets and the screen size will suffice, as a 7-inch screen is roughly the size of a paperback page. Navigation might be another example, as you can fit a 7-incher on a car dashboard with relative ease. 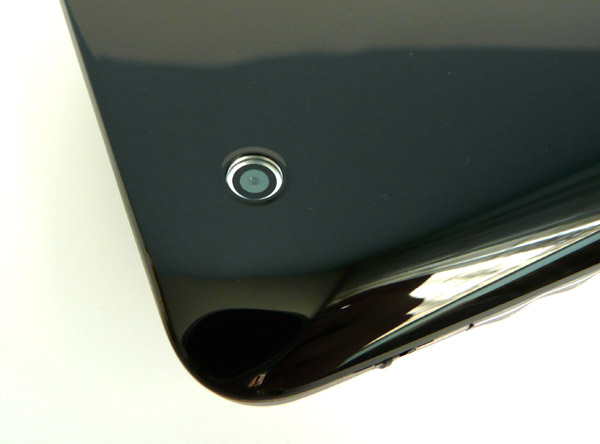 Unsurprisingly, the cameras aren’t impressive either. The 3MP main camera, sans LED, delivers average photos in daylight and it can’t cope with poor lighting. It will come in handy for augmented reality apps and it can capture VGA video, which looks decent. The front facing 0.3MP unit is equally unimpressive, but we can’t say we expected anything better. In all fairness, the Kindle Fire does not have any cameras, so it’s really a one-horse race. 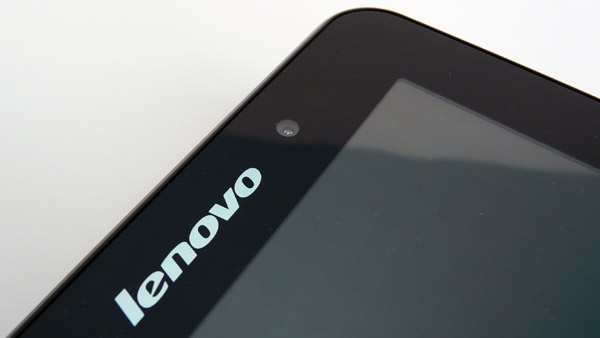 As you’ve probably guessed by now, the A1 does not do well in benchmarks. We pitted it against the old Nexus S, the world’s first Gingerbread device and LG’s Optimus 2X, the first dual-core phone, also running Gingerbread.

Even the Nexus outpaces the A1, with a wide margin in graphics tests. The Nexus features a similar CPU core, but it has SGX 540 graphics, so it comes in handy for graphics performance comparison. The LG is powered by a Tegra 2 dual-core, used in many Honeycomb tablets, so it is also a good reference. 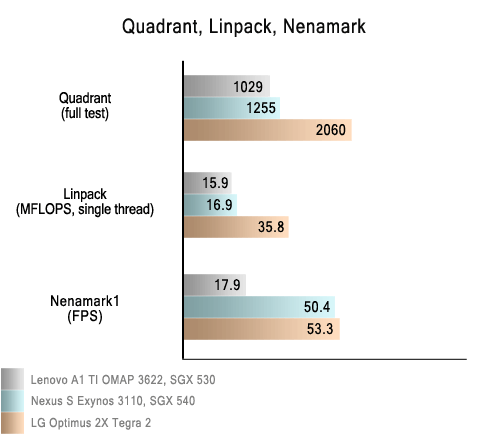 Basically the Tegra 2, with two A9 cores, wipes to floor with A8-based single cores. Even the SGX 540 proves vastly superior to the SGX 530 graphics core used on the A1. Frankly the figures are not surprising, but merely serve to show the pace of progress in the ARM world. With 28nm parts and A15 just around the corner, the future looks very promising indeed. 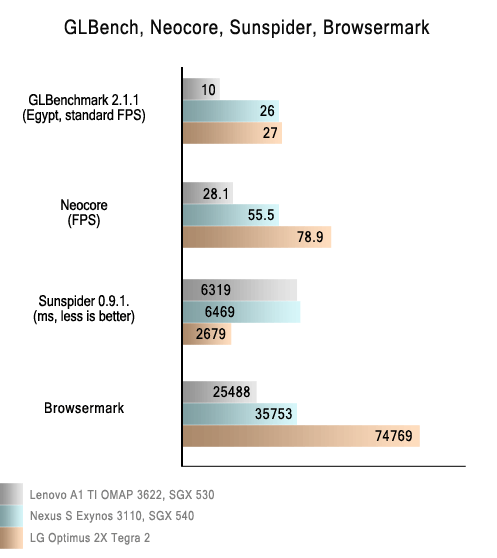 So what about the A1 then? Well, we did not have a chance to test the Kindle Fire or Nook, but we can safely say that they would eat Lenovo’s lunch, as they both feature dual-core A9 processors.

Oddly enough, in spite of antiquated hardware, the A1 delivers excellent battery life. Under moderate load, including browsing, video and some Angry Birds, the A1 managed about six hours, which was surprisingly good. Lenovo promises seven hours of battery life in a browsing-only scenario and its estimate is not far off the mark. If you use the A1 as an e-book reader, with barely any backlight, it will drain less than 10 percent of its battery per hour. It takes roughly three and a half hours to fully recharge the battery. It might sound painfully slow, but all Android phones and tablets are plagued by the same issue, as USB simply lacks amps.

The Lenovo A1 is a mixed bag to say the least and frankly I’m not sure what to make of it.

Just looking at the price and spec sheet would make me slap a Top Value award at the end of the review and get it over with. A brand name Android tablet with 16GB of storage, great battery life and GPS for €154? This makes it cheaper than some e-book readers, let alone proper tablets.

However, it is impossible to overlook its shortcomings. Clearly, it lacks processing power, but even so it offers a decent user experience for the money, so this sounds like a fair trade-off. The poor screen on the other hand is a major issue, even for a value product.

In the end, it is really a matter of personal choice. If you are on a tight budget, the A1 will do the job. Also, if you prefer storage or GPS functionality over performance, particularly in games, it also makes sense. Basically, if you are interested, make sure you go down to your local shop and see the screen in action before you reach for your wallet. Maybe it’s just me, some people might not mind the limited viewing angles as much as I do.

On another note, the A1 seems like the perfect choice for kids, too. It is dirt cheap, robust, it has a couple of cameras to play around with and it is available in white, pink and blue.

Last modified on 26 February 2012
Rate this item
(0 votes)
Tagged under
More in this category: « Asus Transformer Slider reviewed HTC One S put to the test »
back to top