Asus Transformer was one of the first Tegra 2 devices on the market and one of the first, right after Motorola Xoom, to get the Android 3.0, also known as Honeycomb. This operating system made things much better for tablets and it started the Android tablet movement. Many have followed and today Asus Transformer boasts version 3.1 (version 3.2 is listed on Asus’ portal but currently unavailable).

We managed to grab this tablet for the third if not fourth time this year in order to spend a bit more time with it and compare it with sexy, banned by Apple, Samsung Galaxy tab 10.1 and find the key difference. Both tablets come with optional docking stations (picture below). We’d say that Asus’ solution is much more functional, but we’ll analyze this in more depth later in the review. 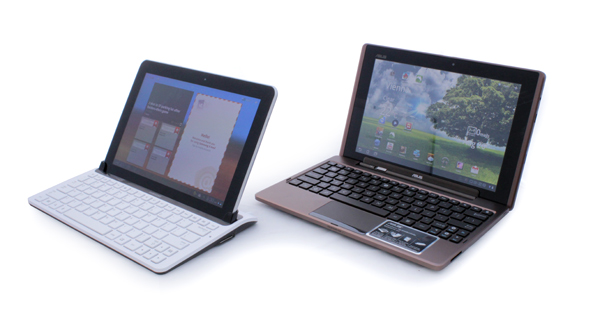 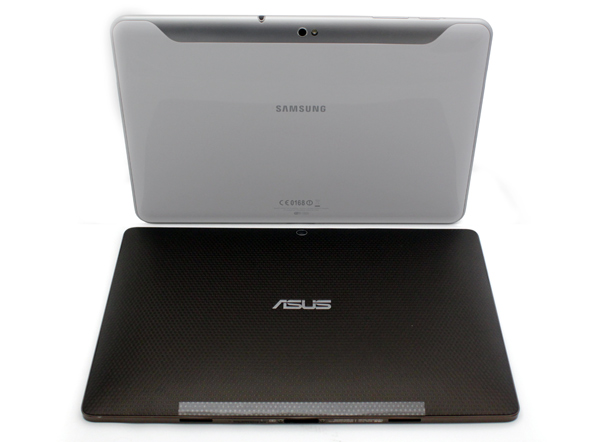 While the devices are almost identical from the technical side of things, design is definitely something that will help tell them apart. Samsung Galaxy Tab 10.1 is the thinnest Android tablet, which reminds of Apple’s iPad, whereas the T101 is more robust as well as a bit heavier and wider.  Galaxy Tab 10.1 weighs 565 grams while the Transformer weighs in at 680 grams.

Back of the Transformer is made of hard, textured plastics, which pretty much kills any chance of it slipping. The plastics will not bend under pressure. 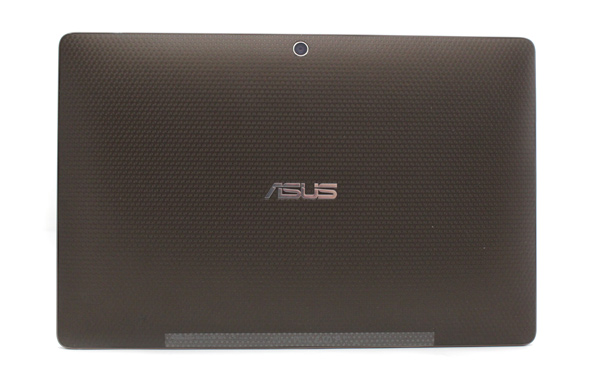 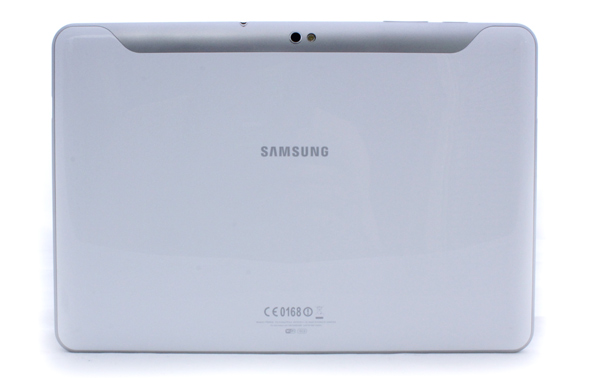 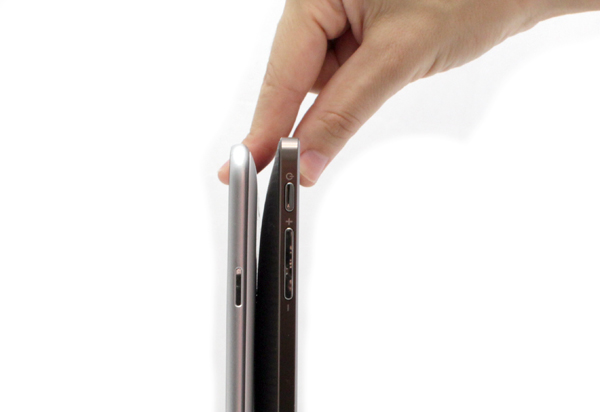 Back of the Transformer is oval towards the center, meaning that it’s quite comfortable to hold. On the other hand, ergonomics is something that you’d best try for yourself and find your preference.

Transformer’s power on key is on the left, whereas Galaxy Tab 10.1 has one on the top part. Both tablets are easy to adjust to, but we did notice a minor design flaw on the Transformer. Namely, speakers are better on the Samsung, as Asus’ speakers have worse placement and can get covered with your hand. 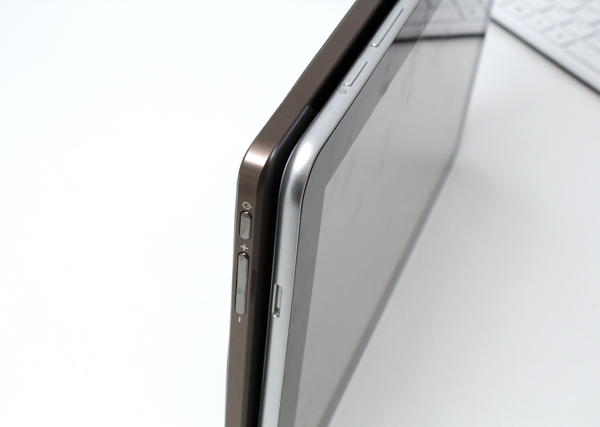 Overall Samsung has better sound when paying music, video or YouTube; the bass is better. 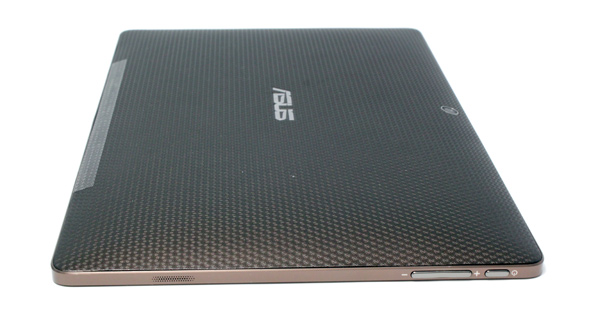 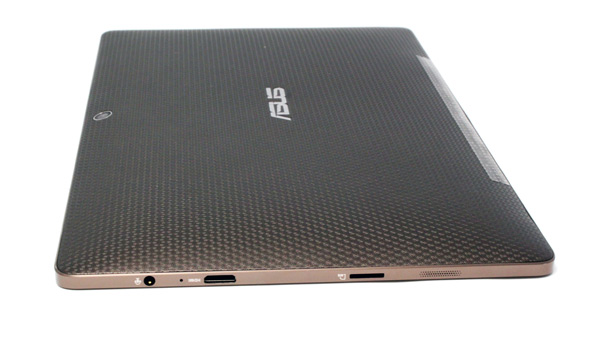 At a glance, Galaxy Tab 10.1 looks a bit plasticky but material quality is very good, just like on the Transformer. 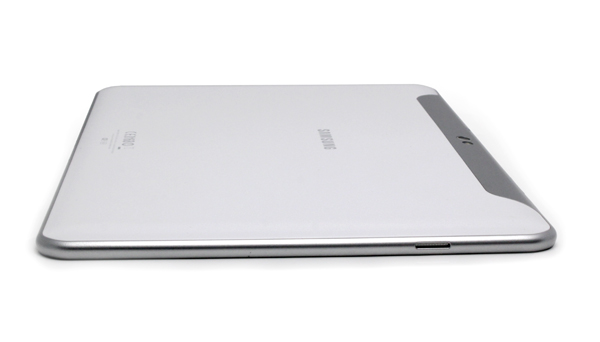 Another key difference are cameras. Transformer makes much better pictures. Asus Transformer has a 5 Mpixel camera while Galaxy tab 10.1 only has a 3 Mpixel one.

The Transformer has a 1.2 Mpixel camera, compared to 2.0 Mpixel camera on the Samsung. If you care to take pictures and videos with tablets, Asus might be a better option, but your face will be better in Skype on Samsung Galaxy Tab 10.1 tab. We have to admit that Samsung has a better screen, sharper edges of zoomed letters and overall better colors. You can clearly see that from a picture below. 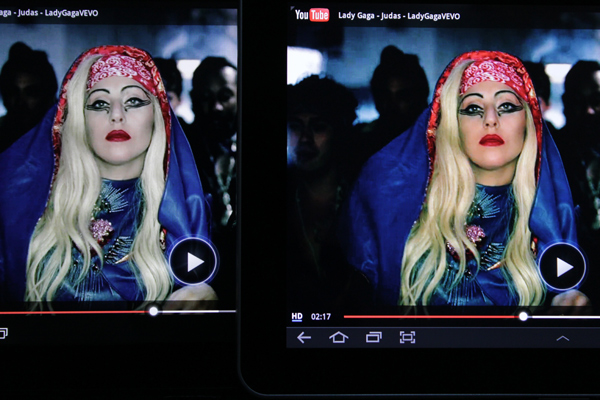 Galaxy Tab 10.1 WiFi is very limited when it comes to connectors – all you’ll get are 3.5mm jack (stereo line-out port) and a 30 pin port connector, The latter is used for everything, be it charging, syncing, connecting to a docking station, vide out, etc. Naturally, all these require additional dongles, which in turn will cost you.

Galaxy Tab 10.1 WiFi Edition has no HSDPA/HSUPA capabilities, but neither does Asus’ Transformer TF101. In other words, wireless LAN is the only way to go online. HSDPA version of Galaxy Tab 10.1 comes with a SIM connector.

On the other hand, Asus Transformer TF101 comes with a few more connectors by default, including a mini-HDMI and microSD card reader. Transformer’s 40-pin port can also be used for additional connections, such as 4-in-1 card reader, USB dongle, etc.

Battery life on both of our today’s samples is pretty similar. While looping video, Asus hit about 9.5 hours whereas Samsung managed 10. With a little help from Transformer’s docking station, you can extend battery life to 16 hours, which is more than most need. 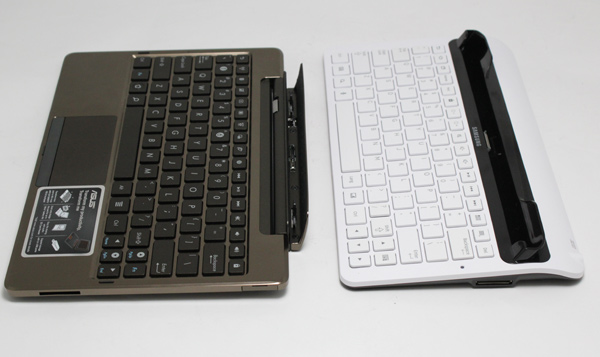 Samsung Galaxy Tab 10.1 also has a docking station, but we’d dare to say that it looks plasticky. Furthermore, it does not have a battery so this round definitely goes to Asus. 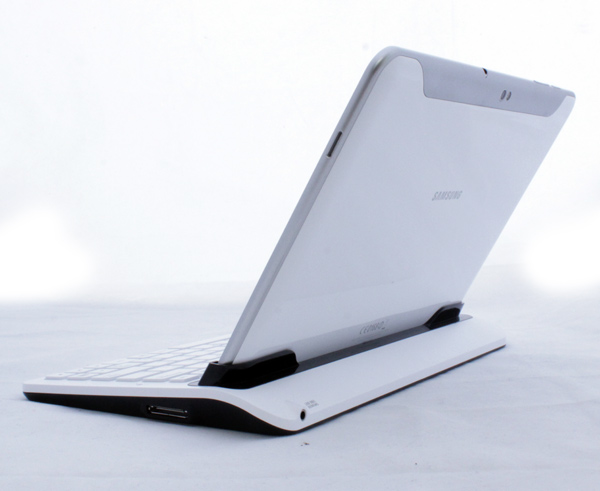 Once you plug a Galaxy Tab 10.1 tablet into the dock, it doesn’t lock it securely and if you lean with the keyboard, the tablet will fall out. In case you’re not planning on carrying it around though, it will work just fine. 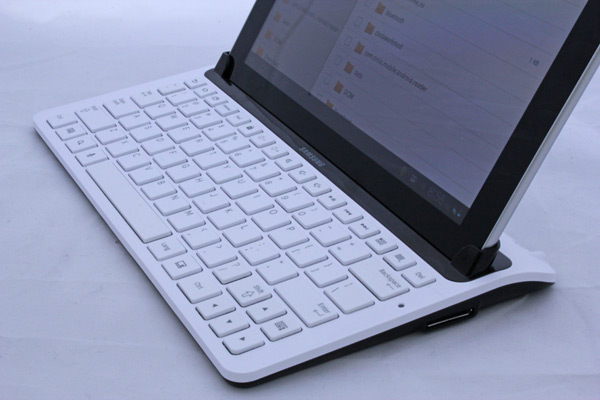 Galaxy Tab 10.1 keyboard and keys are comfortable for typing, which is a must if you’re planning to do any serious typing. It is simply faster and better. The function keys can help you launch applications, settings, adjust brightness or volume.

In addition there is a back button, home button, language key and a key that wakes up the soft keyboard. It is quite heavy though - 12.2 ounces or 345Gram, size 6 x 1.4 x 4.2 inches. We managed to find this keyboard listed for €69.99 in Europe which is not a small price for a matching keyboard. The weight of the keyboard probably takes care of stability, but we have expected at least a card reader or USB, not to mention HDMI, on it. The keyboard only has two connectors, just like the tablet. Namely, one audio line-out stereo and one 30 pin proprietary connector (20mA 5V input) which handles charging.

Overall it’s a nice thing but not as great as keyboard dock for Asus Transformer. 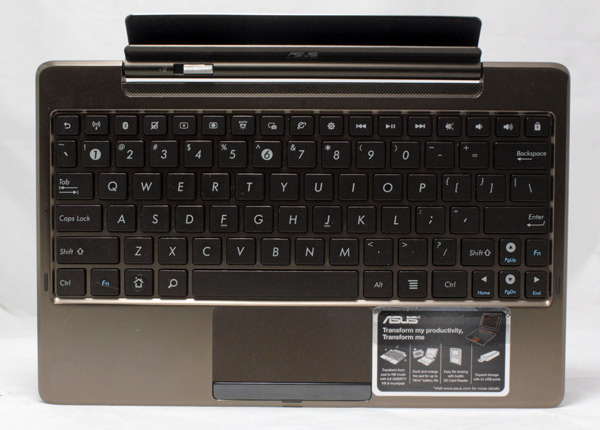 Asus on the other hand has a keyboard that can transform it to a netbook / notebook replacement. The locking mechanism locks tablet securely and it won’t be falling out if you lean with it, even if you turn it upside down. We can only hope that this locking mechanism will last forever. The keyboard is comfortable for long typing sessions. 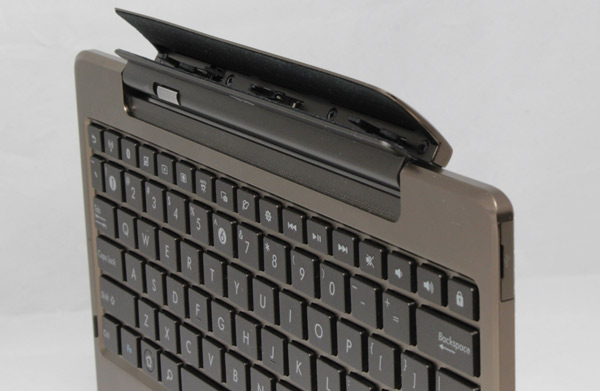 The keyboard has also some Android specific keys such as back, camera launch button, browser or settings launch, but we miss the program launch button that we’ve seen on Samsung Galaxy Tab 10.1 keyboard. The usual suspects such a WiFi, Bluetooth, volume up and down buttons, brightness as well as basic play options are there. Also, we can’t forget the lock button. We don’t get the need for two FN (function keys) as all you can do with them is to change the arrow options to page up, page down, end and home, e.g. in a document. 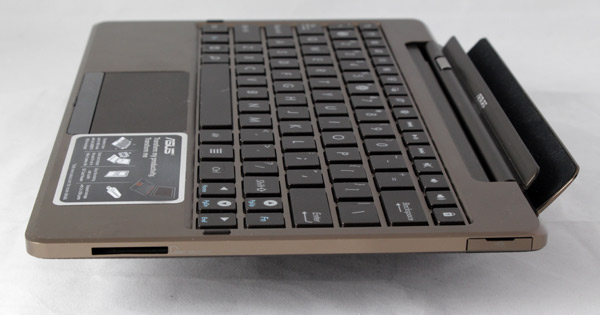 Asus also found a way to add additional two USB ports, hidden below nicely designed lids and added a memory card reader, but someone seems to have forgotten to include a headphones out. The one from the pad will work just fine, but it might be nicer to see it on the keyboard side, not on the side of monitor. 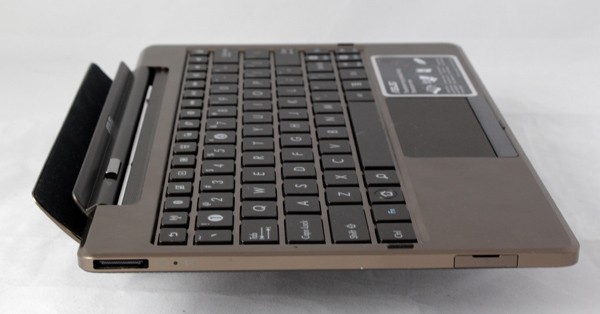 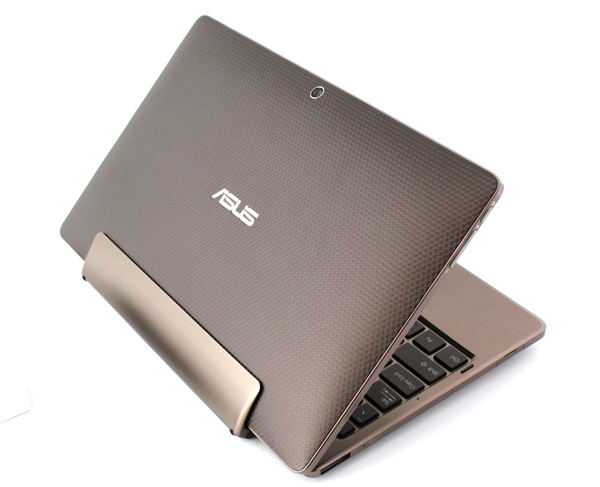 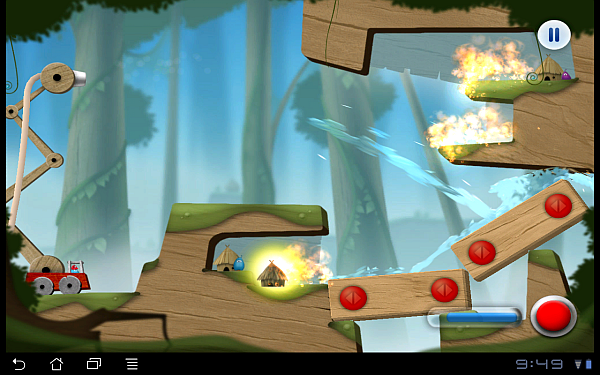 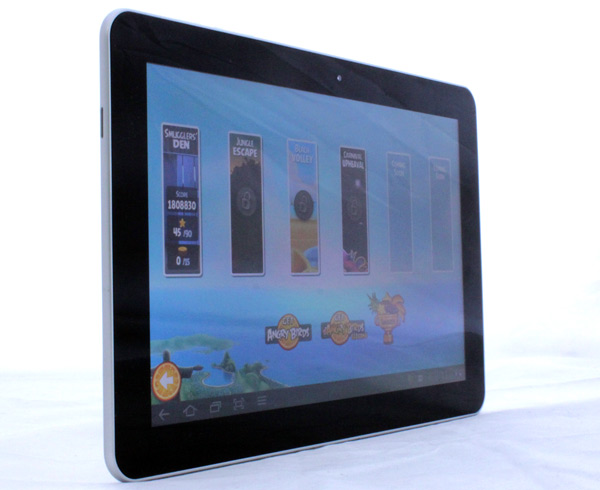