PowerColor HD 6850 PCS+ is a special version of Radeon HD 6850 card that comes factory overclocked and strapped with special cooling.

PowerColor overclocked its HD 6850 PCS+ card as you can see from the GPUZ screenshot. Clock speed is 820 MHz and 1100 MHz memory, which is 6% more on core and 10% more on memory compared to reference clocks.

The Barts PRO is quite similar to the Bart XT except, of course, for the fact that it has two SIMDs less, or simply, it has 48 Texture Units (TMUs) and 960 Stream processors. The Barts XT, known as the HD 6870 card, has 14 SIMDs, with 80 Stream Processor per SIMD (total of 1120 Stream Processors) and 56 texture units (TMUs).

Bart PRO ended up clocked at 775MHz for the GPU and 4000MHz for 1GB of GDDR5 memory paired up with a 256-bit memory interface. 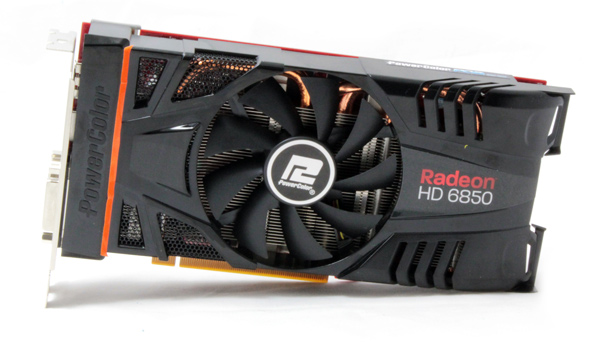 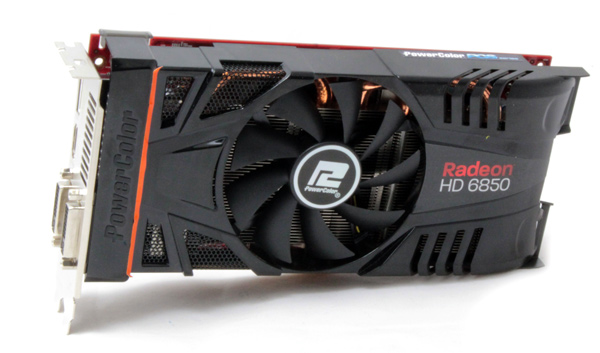 The HD 6870 PCS+ cooling is dual slot and the card is 22.5cm long. The fan is 9cm in diameter and is connected to the 3-pin connector. Fan speed regulation can be performed via the Catalyst Overdrive or any other tool you may prefer. 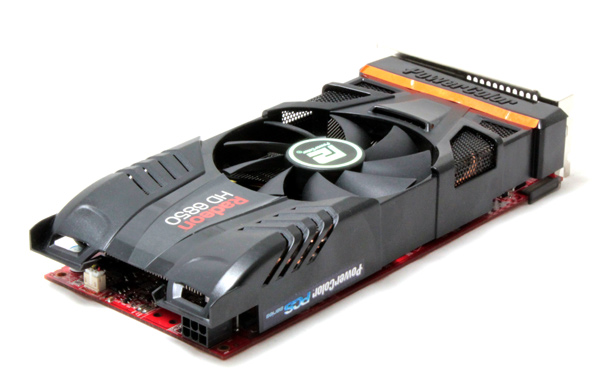 The I/O panel features one DisplayPort 1.2 connector, one HDMI 1.4a and two DVI connectors (one of them is single-link with maximum resolution of 1920x1200). 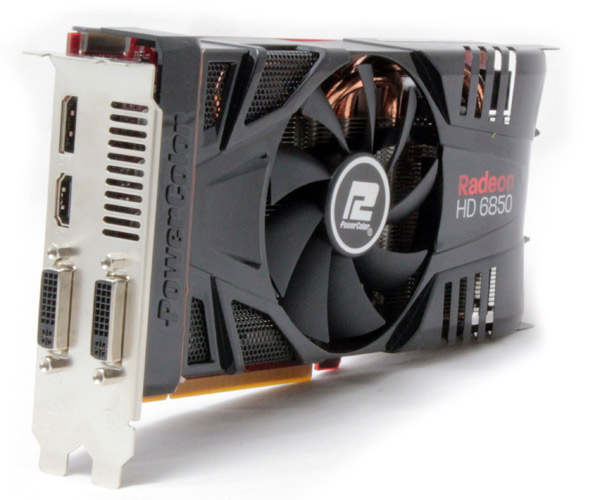 Just like the Radeon HD 6870, Radeon HD 6850 comes with only one CrossFire connector. This means that you can only use two cards in 2-way CrossFire. 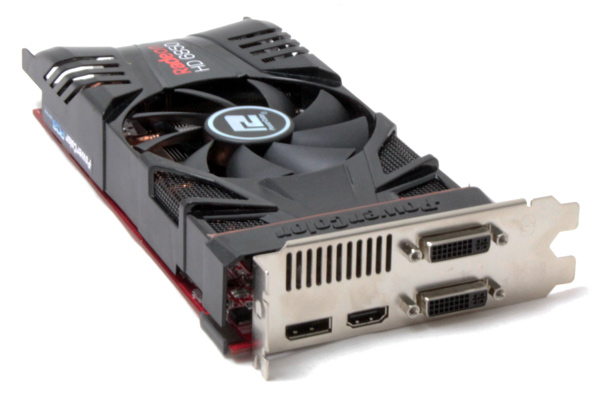 Radeon HD 6850 consumes 127W at max so it will require one 6-pin power connector. Software voltage control via I2C is not possible due to use  of more cost effective voltage regulator uP6213. 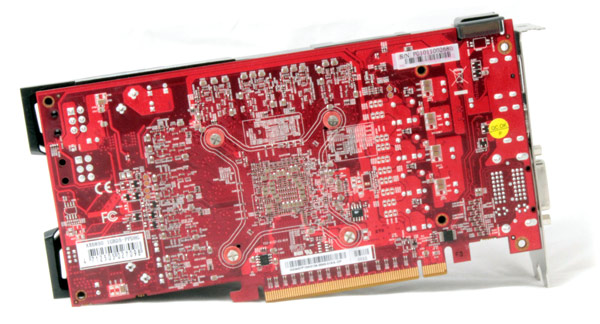 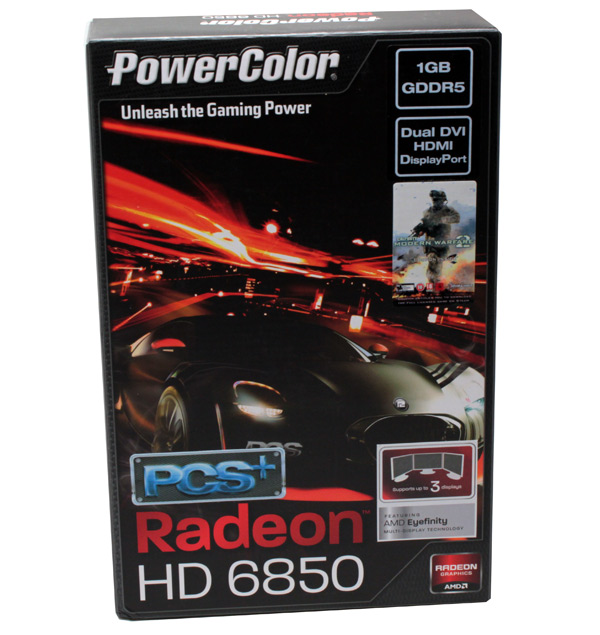 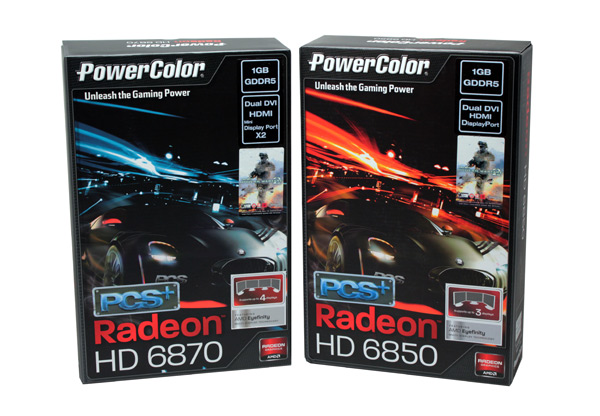 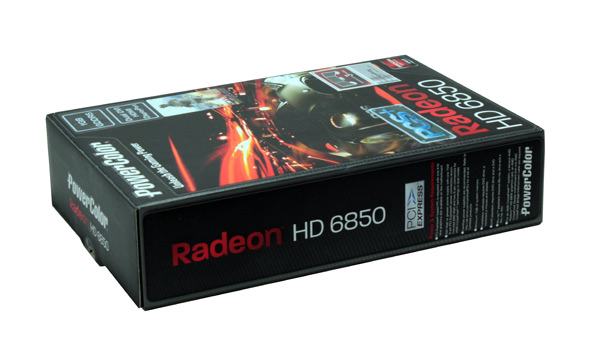 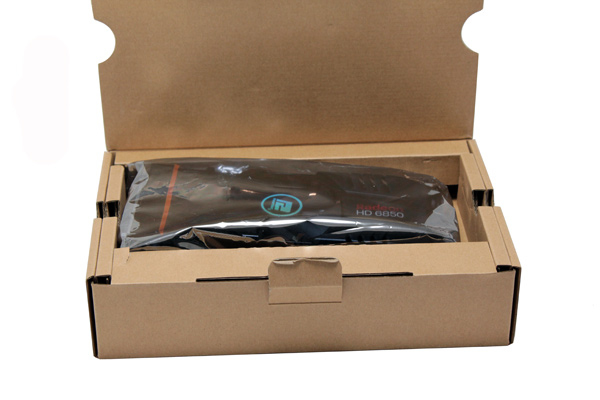 PowerColor included all the necessary accessories, such as DVI-to-VGA converter and miniDisplayPort-to-DisplayPort converters. Standard sized HDMI is already on the card. 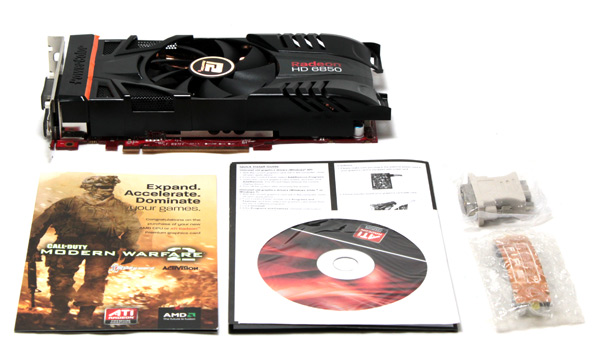 Our test HD 6850 PCS+ card comes with a download voucher for “Call of Duty Modern Warfare 2”, but we have found out that this will only be included in certain regions. Since most regions do not get this gift, it might be wise to consult your retailer. 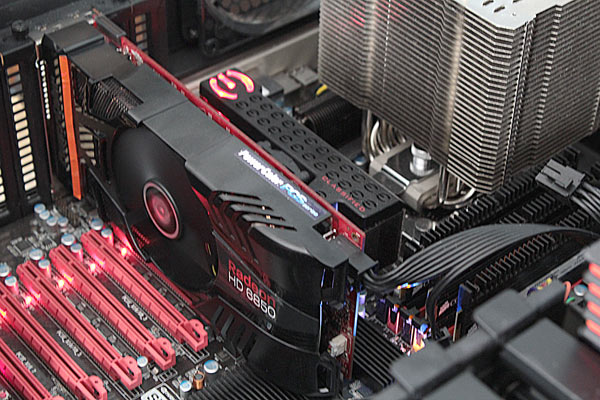 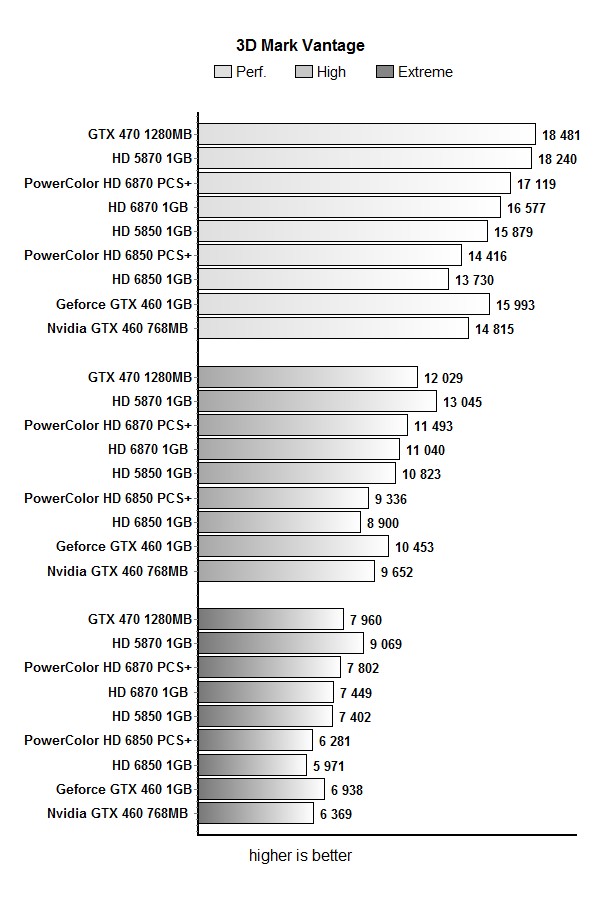 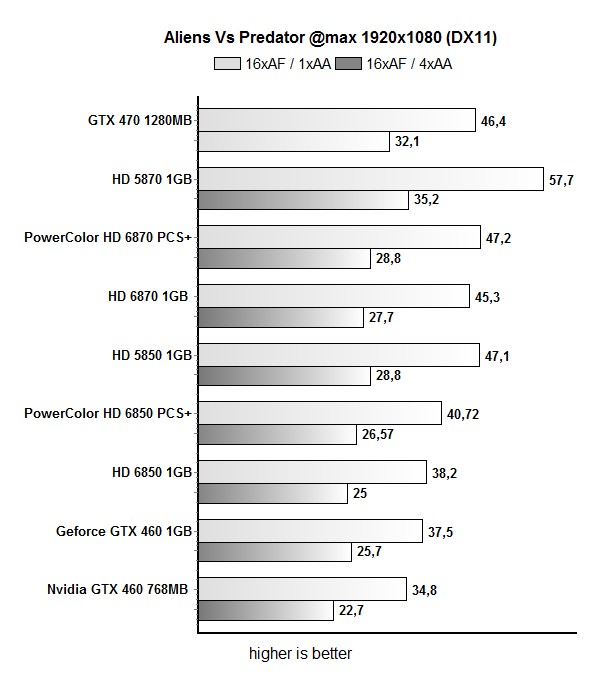 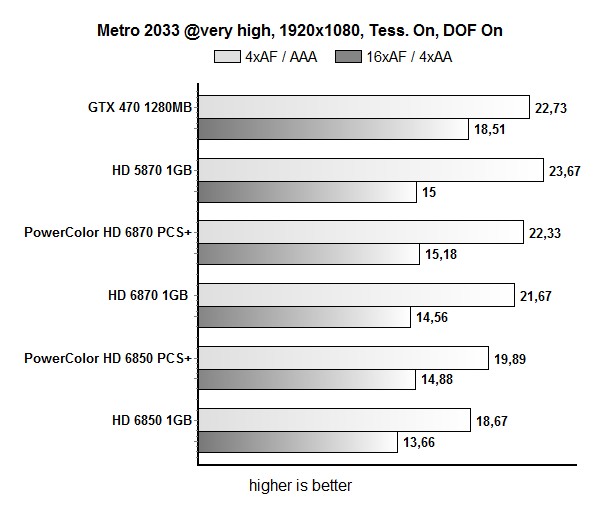 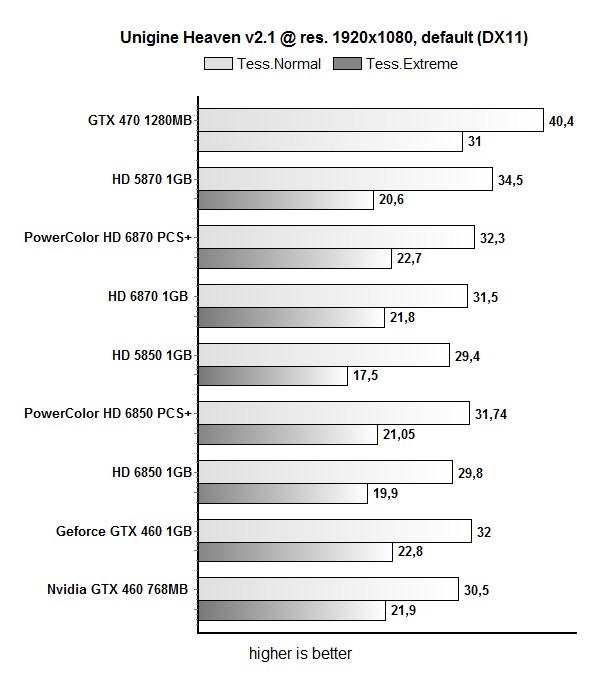 We managed to hit 970MHz for the GPU and 1170MHz for the memory by running the card on factory voltage and with the fan in AUTO mode. Software voltage control via I2C is not possible due to use  of more cost effective voltage regulator uP6213. 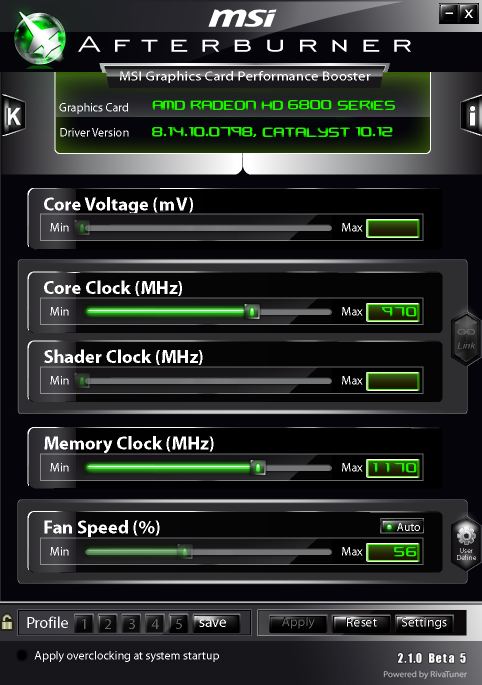 PowerColor HD 6850 PCS+ didn’t exceed 77°C during our tests. The cooler was almost inaudible in idle operation (44°C). The cooler wasn’t loud, not even in intensive GPU operation. 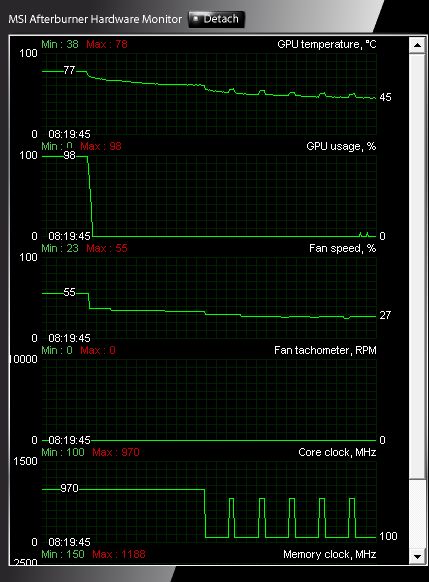 PowerColor HD 6850 PCS+ is a factory overclocked card that comes with special cooling. The card is currently priced at €162 in the EU, which is about €15 more than PowerColor’s reference HD 6850.

PowerColor HD 6850 PCS+ performance is good and will definitely satisfy most gamers who prefer 1920x1080.
The factory overclock will provide up to 5% better results compared to the reference card. The cooler is efficient and very quiet in idle mode, but the same goes when the card is in intensive operation.

Users living in certain region will receive Call of Duty Modern Warfare 2 download voucher, but make no mistake - PowerColor HD 6850 PCS+ is a nice deal regardless. The card bundled with the game is priced some €16 higher.

Quiet cooling and boosted performance with only €15 higher price are reason enough for us to dub the PowerColor HD 6850 PCS+ card a Fudzilla Top Value product. You can find it listed here. 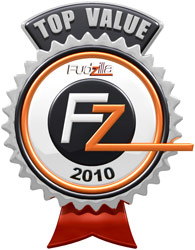