AMD announced the first DirectX 11 graphics card back in September 2009, and the card dubbed the HD 5870 ended up being the fastest single-GPU card up until the GTX 480 hit the shelves. Our today’s guest however, is XFX’s overclocked HD 5870 Black Edition card, the fastest card in XFX’s HD 5870 lineup. We heard about XFX’s Black Edition HD 5870 last year, and today we’ll see whether it was worth the wait.

Unlike the reference HD 5870, where the GPU runs at 850MHz, XFX decided to push the GPU to 900MHz and the memory from 4800MHz to 5000MHz. The overclock of course brings improved HD 5870 Black Edition performance, but we must say that the card also runs very quietly. Although the Black Edition’s GPU gets hotter than the reference one, XFX’s non-reference cooling takes care of temperatures and silent operation. We’re talking about a dual-slot cooler with a fan in the center and a large heatsink with 5 heatpipes. 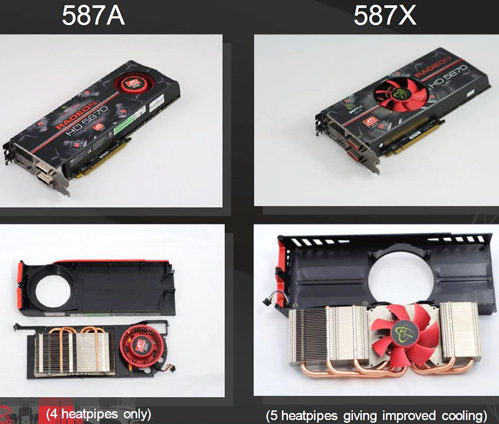 HD 5870 is a part of AMD’s Evergreen graphics card family, and the card is not only fast and powerful, but comes with a plethora of features such as DirectX 11 hardware tessellation support, shader 5.0 extension, multi-threading, ATI Eyefinity, DirectCompute, OpenCL, stream computing, HDMI 1.3a (DTS Master Audio/Dolby True-HD).

Unfortunately, all this wasn’t enough to stop Nvidia’s new DirectX 11 chip – Fermi GF100. Nvidia’s ace packs more than 3 billion transistors, so the GTX 480 now stands as the champ of single-GPU cards. Although the GTX 480 is faster in games, the HD 5870 isn’t to be underestimated and does in fact beat its competitor in certain aspects, such as capability to run more than two monitors on a single card.

Before we move onto details, we must add that our today’s card comes with a free Aliens vs. Predator game coupon, and you can pick your free game up via Steam. This offer extends to chosen XFX cards, among which is our today’s HD 5870 900M 1GB DDR5 DP HDMI DUAL DVI PCI-E Black Edition (Model No.: HD-587X-ZN, Part No.: HD-587X-ZNBV).

It’s well worth noting that XFX always has something in store for its Black Edition customers and those users enjoy additional benefits such as Priority Technical Support, invitations to members-only events, members-only product offers, exclusive info and competitions, etc. This, coupled with the fact that Black Edition cards are made from only the crème of the crop GPUs and other components, makes this card one of firm HD 5870 favorites.