Review: Have Vapor-X - Will run great


Today we’ll talk about one of the quietest HD 5770 offerings - Sapphire’s Vapor-X HD5770. You’re probably already familiar with Vapor-X technology, but if you’re not we’ll brief you real quick – Vapor-X runs similarly to heatpipe technology, although many claim it’s much more advanced, and uses only clean water and vaporization process. Unlike the long heatpipes which transfer heat from the copper base to aluminum fins in charge of dissipation, Vapor-X chamber is a component that brings both copper-base and heatpipe functions together. The advantage is in direct contact with the GPU and a large surface of only a few millimeters thick Vapor-X chamber, which comes in place of a copper base. It then directly receives and transfers heat to the aluminum fins, so except for improved performance, you won’t notice much visual difference between Vapor-X chamber cooling and standard cooling solutions with a copper base. Sapphire has been using this technology for a while now and Vapor-X based cards almost became synonymous with quiet graphics cards.

Thanks to Sapphire, today we’ll show you the HD 5770, which is not only quiet but is ready to provide some pretty high-standard gaming potential. The following picture shows the card, and we must admit it’s a looker. 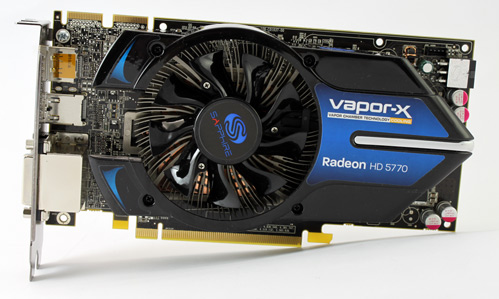 Going in the footsteps of Vapor-X family, Sapphire aimed the HD 5770 Vapor-X at those who crave powerful and stable card that won’t stress your ear-drums. The card is only slightly overclocked – 10MHz GPU overclock with memory left at reference clocks. This means that the GPU is up from 850MHz to 860MHz whereas the memory runs at reference 1200MHz (4800MHz effectively).It’s well worth noting that  although the card isn’t overclocked, with cooling such as this, squeezing out more muscle from this card will be a breeze.

The HD 5770’s ticker, Juniper, features 800 stream processors and 16 ROPs. This is basically a half of what the HD 5870’s ticker, Cypress, packs. The card comes with a 128-bit memory interface, but you shouldn’t worry about bandwidth to much as the card’s GDDR5 memory makes up for 128-bit shortcomings and makes it an equivalent of GDDR3 on 256-bit interface. Of course, Sapphire strapped the card with 1GB of memory, which should come in handy in plenty of scenarios.

Radeon HD 5770 is a DirectX 11 card and one of Evergreen series cards that keeps on making Nvidia’s life increasingly difficult. Performance-wise, the HD5770 is in range with the HD4870, one of the last year’s favorite gaming cards, but the HD5770 brings many improvements over it, such as lower power consumption, Eyefinity technology, improved HDMI and, of course, DirectX 11.

Sapphire never overlooks its trusted customers and has prepared a nice and certainly convenient gift – Dirt 2, which is one of the first and up to date the best DirectX 11 game.